The ILWU and Western Addition Redevelopment A-2 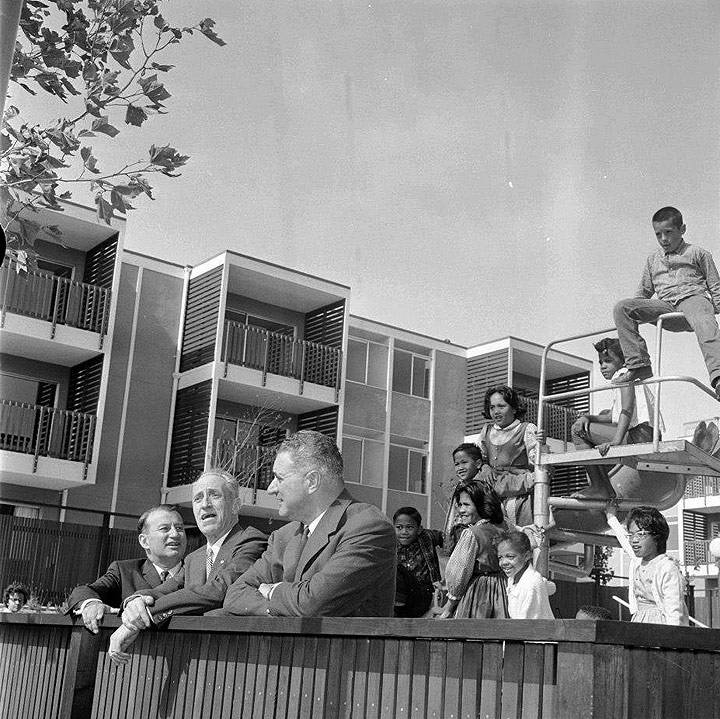 Justin Herman, Harry Bridges, and George Christopher at new apartments for the ILWU in the Western Addition, Aug. 6, 1963.

The first demand to the A-2 Program for a humane relocation policy came from ILWU Warehouse Union Local 6 in January 1964. (“Relocation” was the term used to move residents out of their homes.) They formed an ILWU Joint Housing Committee which cited the destruction that the relocation policy of A-1 did to the community and called for action to prevent the same policy in A-2. ILWU Local 6 had 600 members living in A-2 and made the following statement:

“Recent expressions from the office of the Redevelopment Agency seem designed to stampede residents of the second Western Addition Project Area into the belief that mass evacuation of their homes is obligatory and inevitable, and that each family would do well to find its own separate solution to the problem of dislocation. The ILWU serves notice now that it will urge its members to join with all other tenants in A-2 in a mass refusal to budge from present dwellings until each and every family in the area has been provided with a home fit to live in at a price they can afford.

“ILWU enunciates the principle of “An injury to one is an injury to all.” It is disgraceful that the Redevelopment Agency cannot even find two-thirds of the former residents of A-1, Local 6 asserts its determination that tenants of the A-2 area shall not simply become “missing persons” lost in the tragic confusion of being uprooted from their homes.

“ILWU will start at once to explore with all interested organizations, the feasibility of establishing a broad membership organization on the order of a Tenants League of Resistance. The purpose of such an organization would be to bargain formally with the Redevelopment Agency, and will use as a lever in bargaining its ability to mobilize the resistance of its members to being expelled from their homes.” 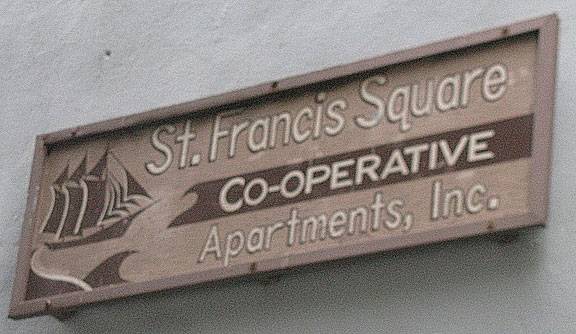 A few months later in May 1964, The ILWU-PMA Longshore Redevelopment Corporation along with Marquis and Stoller, Architects, submitted to Mayor Shelley a proposal on Relocation in A-2 which would overcome the worst aspects of the mass evictions in A-1. This proposal demanded that relocation be planned in three phases and that no families or individuals need move until housing for both low income and moderate income could be offered in the Western Addition neighborhoods. The first phase would construct low to moderate housing on unoccupied commercial sites which would not require any families or businesses to be relocated. Once this new housing was completed, relocation would begin and then that vacated housing could be demolished or rehabilitated to provide homes for the next phase in relocation. The ILWU plan would require land be sold at rock-bottom prices, using low interest loans, with tax exemption for a limited number of years. Additionally, investor-sponsors must be willing to forego profit, taking only a nominal rate of investment return. Basically, it was the formula which made St. Francis Square possible. Redevelopment’s response was that the ILWU’s Plan presented to Mayor Shelley was, “precisely what the Agency has proposed.”! 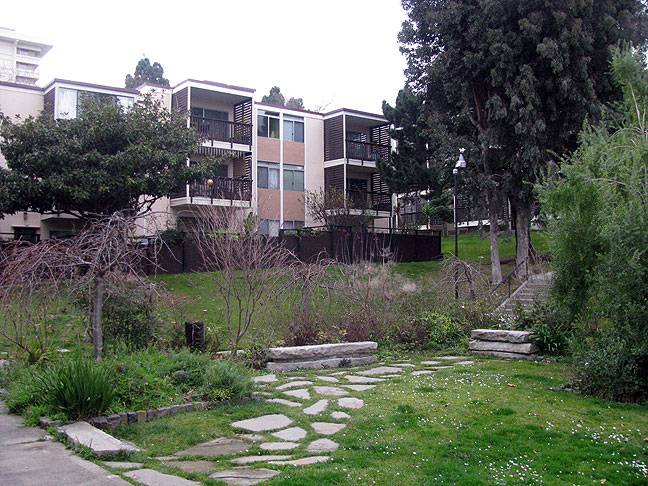 But the relocation disaster of A-1 was still a vivid memory. In the 1960s, neighborhood activism was a growing force. Mayor Shelley and later Mayor Alioto, and the Board of Supervisors were responsive to this growing movement and it slowed the Redevelopment Agency’s plans for A-2. In March 1966, two years after the Local 6 called for action, Hannibal Williams and Mary Rogers gave leadership to the Western Addition Community Organization to oppose the Redevelopment Agency’s plans for A-2. The group soon became known by the acronym of WACO and brought together many organizations–church groups, and others, including many from St. Francis Square. WACO filed a lawsuit against the Redevelopment Agency and won a court injunction which gave them the right to representation in Redevelopment’s decision-making process. It was the first time in U.S. history that such a neighborhood action had been won. Out of the movement Wilbur Hamilton, a Black minister, was hired as A-2 Project Director and after Justin Herman retired, he led the Redevelopment Agency for ten years.

Former Redevelopment Agency official Carlo Middione describes the relationships and politics of the Agency with the ILWU and the local African American churches. 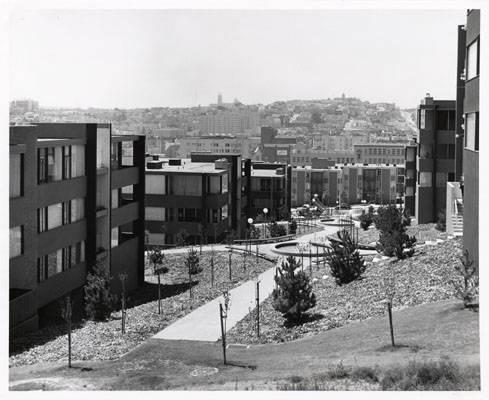 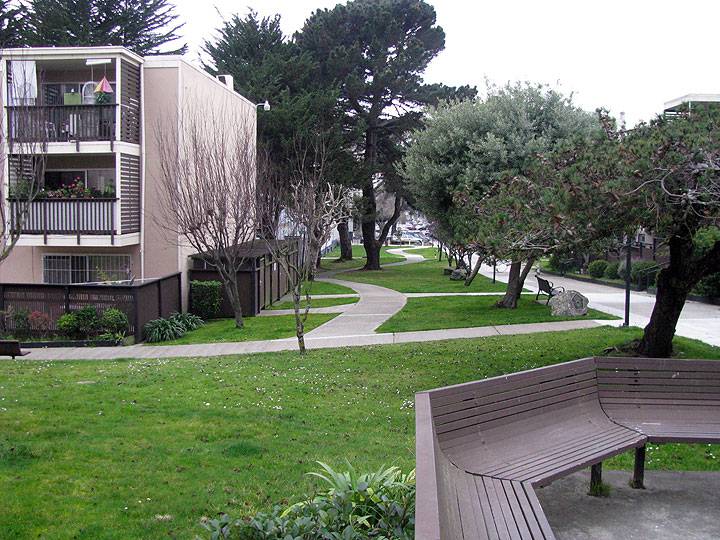 Redevelopment’s actions in A-2 did respond to the community’s involvement, and the ILWU and St. Francis Square can be proud of their role in this improvement. Did Friendship Village and other apartment developments provide better homes than the ones they vacated for the families relocated in the A-2 area? What about the commercial businesses? Through the 1980s, the total was one Safeway supermarket, and several fast-food chains on lower Fillmore Street.

A walk through the area south of Eddy Street will take you past the apartments built during the initial A-2 period from the late 1970s to the 80s–they are well maintained, but one after another instills a certain institutional quality. Occasionally, you will also find a few restored older apartment buildings, which add color and variety. You can also walk through two areas near the border streets of A-2 which have rows of restored Victorians, with signs declaring them “Historic Districts”—Bush Street between Fillmore and Webster, and Alamo Square, beginning at McAllister and Steiner. In the A-2 Project, Redevelopment did “relocate” many Victorians. But when you learn that 2,500 of these Victorians were demolished in A-1, it makes you weep to think of what the Fillmore could have been if Redevelopment had spent more of its millions on grants to those existing owners to rehabilitate their homes. 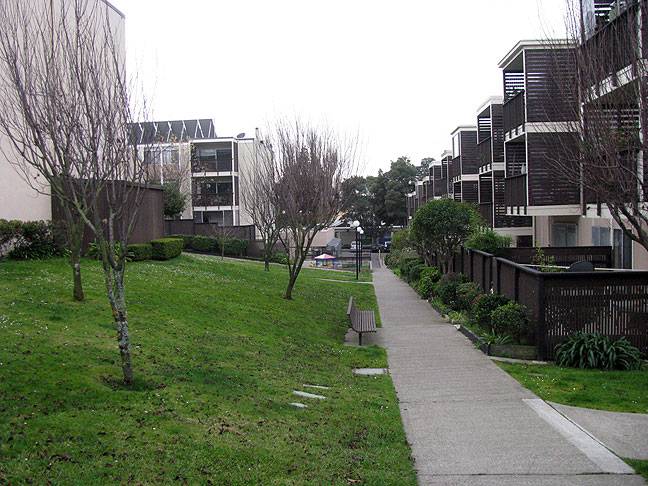 In 2008, a SF Chronicle editorial stated, “Sad Chapter in Western Addition History Ending.” It reported the closure of the Western Addition Redevelopment Agency 52 years after the first demolition began in 1956. “The thriving Black business community was destroyed and owners of barbershops, banks, nightclubs and retail stores were forced to close up shop. ... Though the Agency promised to move people back into the neighborhood after the Project was completed and help the business community recover, the area sat empty for years.

“In recent years, [with the development of the ‘Jazz District’] there have been some successes, like Rasselas Ethiopian restaurant, the Seba Piano Lounge and the 1300 Fillmore restaurant, but many residents say those do not make up for the past injustices. Rev. Arnold Townsend was quoted, “Yoshi’s is wonderful, but not worth destroying a community.” He continued, “We are glad they are gone, but it would be better if they had never come.”

The article closes with the following summary:

St. Francis Square has survived, and many of its surviving “originals,” now in their 70s and 80s, are still with us and nurture nostalgic memories of years when many children at play was a constant sound.

In 2004, we made our last mortgage payment and were no longer governed by our Regulatory Agreement with HUD—the successor to FHA. For the prior eight years, members studied the changes and options we had to consider when the mortgage would be paid. After much information was shared, discussion and meetings held, we had to make our decision. Would we continue as a limited-equity co-op, a market-rate co-op, or convert to a condo? Each choice had pros and cons, but when mailed balloting was completed, 50% voted to become a market-rate co-op, 25% voted to continued as a limited-equity co-op, and 25% voted for condo conversion. The vote provided a clear choice. 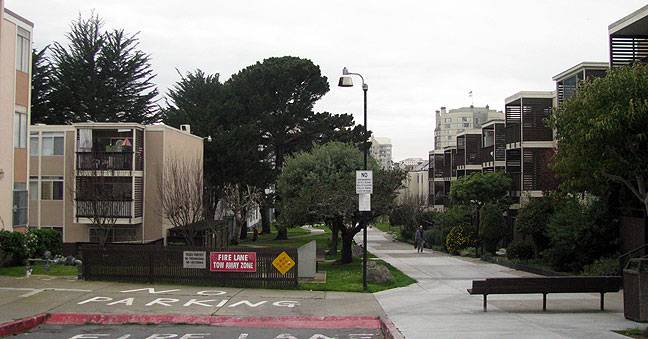 The recent years have brought new families, ready and willing to serve on committees and to become part of the Square’s governing Board of Directors. Our current Board includes one long-term member, three members who have bought in to the market-rate co-op after 2004, and one “original.” Our committee chairs also represent a mix of post-2004, second generation, and long-term members.

We have an active and involved leadership which has to make tough decisions, such as increasing payments into our reserves to sustain the maintenance demands of our aging buildings. The Square’s needs are ongoing, but new members and old are giving them a great deal of tender, loving care. 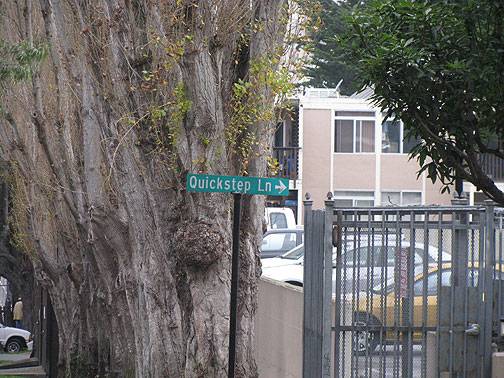 Sign for Quickstep Lane, one of numerous paths and streets named after ships and waterfront-related terms at the founding of St. Francis Cooperative Apartments.