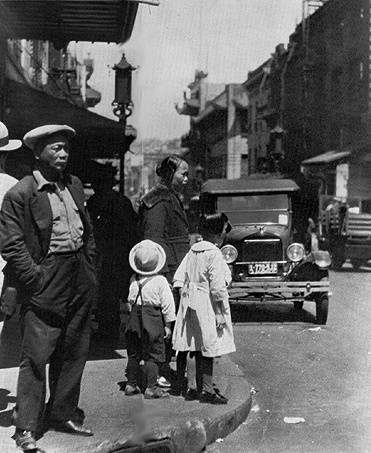 Arnold Genthe image of Chinatown in the 1920s

The experience of the old quarter lingered with Arnold Genthe, the famous photographer of Chinatown, and when he visited the rebuilt neighborhood in the 1910s and 20s, he was not fooled by its new, tourist-friendly glitter. He searched for the remnants of Old Chinatown, details that would confirm the logic of his recently anthologized photographs. He observed:

On brilliantly illuminated streets, smoothly asphalted, filled with crowds in American clothes, stand imposing bazaars of an architecture that never was, blazing in myriads of electric lights. Costly silk embroideries in gaudy colors, porcelains of florid design, bronzes with hand-made patina, and a host of gay Chinese and Japanese wares which the wise Oriental manufactures for us barbarians, tempt the tourist to enter, while inside cash-registers and department-store manners, replacing abacus and old-time courtesy, indicate up-to-date methods. In one store the Chinese owner even wears a proud tuxedo. Yet even today, in these warehouses of quite modern Oriental art, as well as in the modest store of the small dealer next door, may the patient searcher discover a precious bit of lacquer, a charming piece of brocade (Genthe 1912, 206).

Genthe is quite specific about the new Chinatown's faults: its fabricated architecture, utterly clean pavement, carefully offered commodities, consumer-driven etiquette. We sometimes think that it is only through our careful hindsight that Chinatown's early artificiality can be named; but as Genthe's testimony will evidence, some contemporaries easily recognized the fabrication. They may differ from us in that some of them held the belief that a truly authentic quarter lay beneath the rubble, palimpsestic in the alleys and corners. In Genthe's case, the past was observable in lacquered bits and brocaded pieces--ironically, in the fragments of an earlier consumer culture...

The photographs gave ceremonial form to the claim that the new tourist quarter, like the old, was still ridden with vice, despite the appealing pagoda lamps and colorful streaming banners. They insisted that the new, seemingly open Chinatown was to be regarded with skepticism and that a fundamentally Chinese culture lay hidden beneath or behind the consumer world.

We might readily suggest that this early argument still obtains today, when Chinatown is continually regarded as a double simulation. On the one hand, it is held to be a fabulous fabrication for the benefit of its visitors; the busloads of tourists only seem to confirm its continued hold on the imagination. On the other, it is often viewed (by San Franciscans, who know better) as a careful ethnic dissimulation, which strategically displaces concerns over the quarter's social, economic, and sometimes moral abjection. The argument itself is predicated on the belief that an "authentic" culture resides somewhere outside of the street-level glitter, since its hollow shell holds only uncertain attachment to the real and unsurveilled lives of its citizenry. Genthe's comical picture of a Chinese merchant in tuxedo, donned for the unsuspecting customer, is a condensed image of this larger, still-pervasive anxiety. Another collective life must lay beneath the natty coattails and tie.

In contrast to this general reading, I suggest that Glitter Chinatown was built on the fantasy of a hidden life and, in fact, represented and continues to represent that life by staging its perpetual absence. The fantasy of a hidden Chinatown harbors both the fears and desires of the non-Chinese visitor and, most importantly, polices the continuum of the touristic experience.

In this case, the "Orient" was increasingly subject to the historical momentum of west coast capital, and its main features were best glimpsed, as Genthe observed, in a culture of mass produced objects "that never was." A whole subculture of abjection was construed in order to naturalize the increasing commodification of an ethnic neighborhood and culture and its attendant anxiety. Glitter Chinatown could never be allowed to exist legitimately, a hollow shell without a hidden culture. It could not readily become a mere simulation, an object of the tourist's fancy. The Chinese themselves must be held responsible for capital's ruthless colonization. 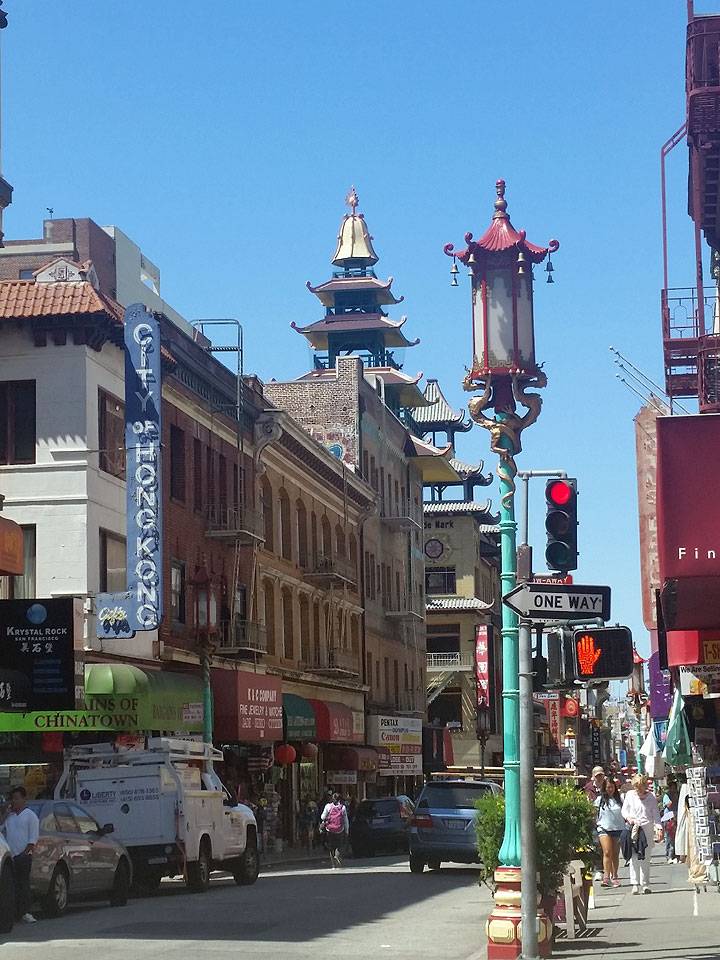 This might seem to constitute a hopeful picture of Chinatown's history, at least from the point of view of the Chinese, since it offers the possibility that an alternative history--one more or less based on the quarter's hidden lives--had always existed as an absent (and necessarily absent) impelling force. It is sufficiently grim, however, in that the alternative history is nothing but a touristic fabrication, too. Chinatown's underground was only representable as a nexus of desire and loathing.

We must prepare ourselves for the possibility that some Chinese, like the painter Yun Gee and his cohorts, held quite similar views--that Glitter Chinatown was a tenuous putting-into-place of another, replacing image and that it did in fact produce a fantasy of the "real" lives of its citizenry. The singular difference may have been the worry that both halves of that equation--the tourist world and the representation of an unsanctioned subculture--were all that the new Chinatown seemed to amount to. . .