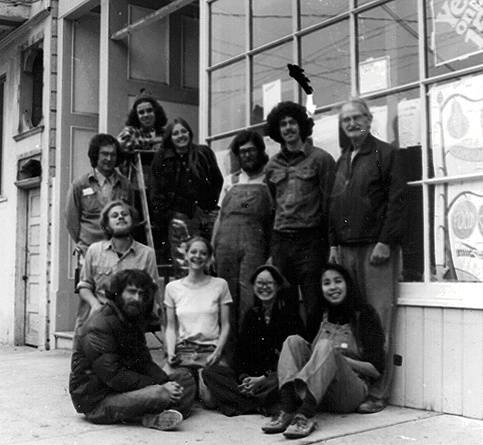 Food Conspirators like these got together to start storefronts around San Francisco, organized under the People's Food System. Photo: Teitelbaum

"Many houses belong to one of the Food Conspiracies. The conspiracies are groups of people in different neighborhoods who get healthy food for the cheapest prices possible. There are conspiracies all over the city, including 10 in the Haight. Each house does some work, and this breaks down the servant-master trip of grocery stores." --San Francisco Good Times, 7/18/72

The San Francisco Food Conspiracy was a loose federation of autonomous buying clubs based either on neighborhood or political affiliations. Household representatives would meet to discuss and take orders on quantities and varieties of produce and bulk items. If there were 10 households in the buying group, for example, each household might order 10 pounds of brown rice, so an order of a single 100 pound sack of rice could be placed. Or several households could agree to split a case of bananas. The orders were taken, the money exchanged and then the buying club coordinator placed the order. Volunteers picked up the food, brought it back to a central location in the neighborhood, and then members either picked up their order, or had it delivered.

There were hundreds of such clubs in San Francisco by the early 1970s, in the Haight Ashbury, in the Western Addition, Noe Valley, and almost every other neighborhood. For many conspiracy members, it would be the first time they sampled such fare as brown rice, bulgur, garbanzo beans, tofu, and whole grain flours. For many others, it marked the discovery of delicious fresh vegetables, in contrast to the canned or frozen ones they pushed around their plates as children.

"The Free Breakfast for Children program is a socialistic program, designed to serve the people. In America this program is revolutionary. In capitalist America any program that is absolutely free is considered bad business." --The Black Panther, 10/4/69

The building of food conspiracies were, at their core, political acts. Such "conspiratorial" activities were often used as ways to organize neighborhoods against price-gouging supermarkets, and to raise consciousness about the irrationality of the profit system. The Black Panther Party used their food co-op to agitate for more independent economic activity on the part of the Black community. Food conspiracies grew rapidly all over the U.S., and in many cities the range of ordering included non-food items such as tools, farm equipment, even tractors! But the food-buying club model was very time-consuming and depended on volunteer labor. People grew weary of working so much to stock their kitchens. Activists felt that such buying clubs discriminated against full-time workers with kids, who may not have time to go to a buying meeting, run down to the produce terminal, or break down food orders. New models for "serving the people" were being looked at and discussed.