by Mae Silver, from the chapbook Rancho San Miguel' 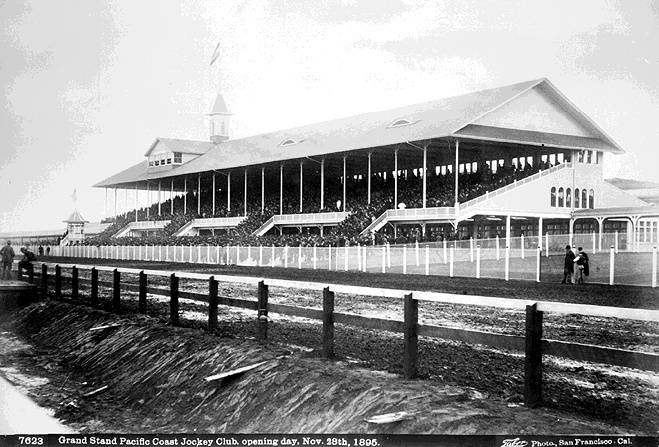 On November 15, 1873, the biggest traffic jam in the outside lands, perhaps even in all of San Francisco, occurred as a result of the largest turnout for a horse race up to that time in California history. Horse racing as a social event in the Bay Area began during the Spanish Colonial period and grew into community spectacles in the Rancho Era. The Victorian Age gave horse racing cultural dimensions of grandeur and ritual as shown in this 1873 competition. 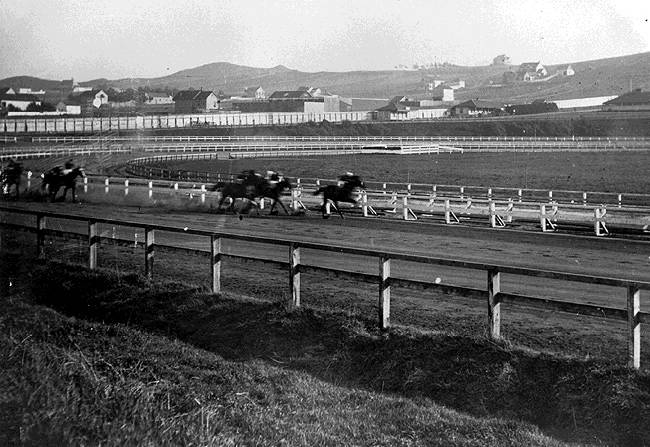 The purse of $20,000 in gold attracted entries from all over the United States, so that day, this race was the height of national excitement. As morning broke that Saturday in November, people poured into every conceivable route, road and footpath leading to the Ocean View Riding Park near Lake Merced. Soon the brown hills were dotted with black carriages and hurrying figures. As far as the eye could see, 20,000 people and 2,000 vehicles converged on the race track to await the 2 p.m. main event. What excitement and rowdy good humor there was! When Thad Stevens, the California favorite horse, won, imagine the roar that crowd made! Imagine the roar as it echoed in the surrounding hills!

The Examiner reported what happened when the multitude and their carriages turned to leave-at the same time: "The start from the Ocean House (Race Course) was something marvelous to see. The drivers stormed and scolded, the women shrieked and cried, wheels locked at intervals of perhaps ten minutes. Occasionally, too, a carriage would capsize, and be hauled over to the fence for repairs ... [It was] like a huge funeral procession, crawling along at a snail's pace. It was a feat to get to the city at all." (Nov. 16, 1873). The next morning, as the sun rose over Corbett Road, the last dusty, tired but joyful horse racing fans found their way clear to return home. The biggest, most exciting horse race in San Francisco was over. (See also, California Alta, SF Chronicle, Nov. 16, 1873).