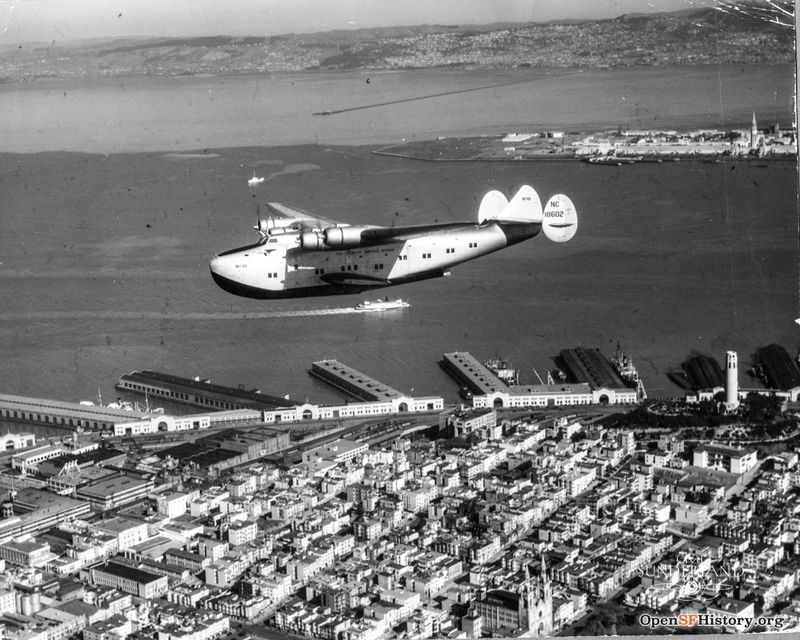 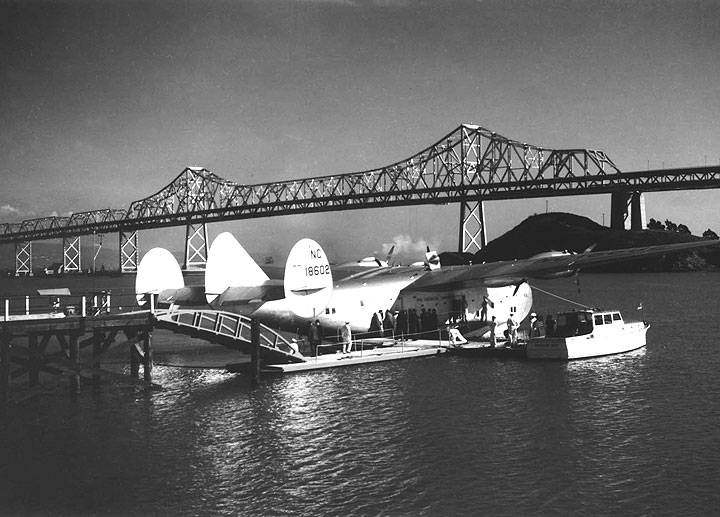 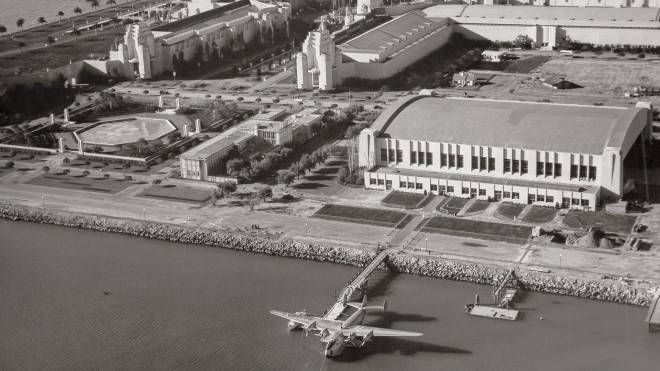 The year is 1935. As Pan American Airways plans its historic attempt to conquer the Pacific, the world is in a deep economic depression. Franklin D. Roosevelt has just been elected president of the United States—and will remain so for an unprecedented four terms. Only 48 states are in the Union; Alaska and Hawaii will not be added for almost 25 years. Prohibition has been repealed, and thanks to Hollywood, New York’s Empire State Building will forever have King Kong associated with it.

The establishment of Pan Am’s transpacific route, a mere 32 years after the Wright brothers’ Kitty Hawk success, overcame the greatest technological, geographical and navigational challenges of the day. Its fleet of flying boats captured the world’s imagination as it ushered in the age of global air travel. Today people cross oceans in airplanes without even a second thought, but in November 1935, that very first transoceanic commercial airliner flight was a mammoth undertaking that presaged modern international travel.

November 2010 marked the 75th anniversary of that inaugural China Clipper flight, which opened the Pacific to the world’s first regular transoceanic commercial air service. The San Francisco Aeronautical Society, a nonprofit volunteer organization dedicated to preserving the history of aviation, in conjunction with the Pan Am Historical Foundation, organized a variety of events commemorating what is generally regarded as the greatest milestone in commercial aviation history.

Initially, the British government blocked Pan Am’s use of intermediate bases in Newfoundland and Bermuda until a British airline could be made ready for reciprocal service—a desire that never materialized. So, Pan Am turned its attention to the Pacific. Survey flights to Asia had begun in 1931, when Col. Charles Lindbergh and his wife, Anne Morrow Lindbergh, made a flight along the Great Circle route from New York to Nanking, China, via the Arctic. Though successful, their epic journey exposed insurmountable challenges, both diplomatic and meteorological. Therefore, it was in the middle latitudes that Pan Am would create the first transpacific route.

Searching his globe for the steppingstones needed to link a route across the planet’s greatest water gap, Juan Trippe, Pan Am’s president, began plotting the route to Asia. Apparent were Hawaii and the Philippines, with the inevitable jump from there to China. Midpoints in the Hawaii-Philippines sector could be Guam and Midway Island. This still left a gap of more than 2,800 miles.

In studying 19th century clipper ship logs in the New York Public Library, he found a little-known coral atoll named Wake Island. With a series of island bases between San Francisco and Manila in the Philippines, the longest sector of the 8,210-mile airway would be the 2,410 miles from San Francisco to Honolulu.

After specifying and ordering aircraft capable of the route, and while conducting a series of survey flights, Pan Am constructed the facilities for air bases and overnight passenger accommodations at the mid-Pacific points. Two of them, Midway and Wake, were built from scratch.

In early 1935, the 15,000-ton steamer North Haven was loaded at San Francisco’s Pier 22. It would carry prefabricated structures for two complete villages and five air bases, a quarter of a million gallons of fuel, 44 airline technicians, 74 construction workers and 32 ship’s crewmen. Heavy equipment, such as motor launches, barges, tractors, refrigerators, diesel electric generators, windmills, water storage and gasoline tanks, radios and direction-finding equipment and even a small-gauge train were also taken. A ton of dynamite was added in Honolulu to clear the lagoons for flying boat operations.

Pan Am’s fabled China Clipper, a Martin M-130 flying boat, left Alameda on San Francisco Bay on November 22, 1935. Under the command of Capt. Edwin C. Musick, the flight would reach Manila six days later via Honolulu, Midway, Wake and Guam. The inauguration of ocean airmail service and this first commercial air route across the Pacific were significant events for both the U.S. and the world.

Trippe, the airline’s visionary leader, suggested the use of “clipper” names for Pam Am’s fleet of flying boats. He saw this new class of long-range aircraft as modern age versions of the swift 19th century clipper ships that plied the trade routes of the world. In reality, they did share many of the design challenges faced by marine architects, with respect to buoyancy, hull contours and general seaworthiness. Their flying capabilities made them true hybrids during this period of transition from surface to air transport.

The Pan Am “Flying Clippers” title became one of the most distinct and famous brand names in aviation history. The maritime references and advertising slogans, such as “aircruise,” conjured up images of sailing through the skies to distant and exotic shores. The terminology and navy blue uniforms of the flight crews reinforced this aura. In many ways, operating procedures were actually based on naval standards. The highly skilled crews were cross-trained in navigation, both celestial and in the new radio direction finding technology.

Pan Am pilots were among the most experienced aviators of their day, and the early flight crews and ground personnel set the standards in airline operation. Captain Musick was an Army Air Corps flyer during World War I and one of the first pilots to accumulate 10,000 hours of flying time. He joined Pan Am in 1927 and soon became the chief pilot. He flew the first survey flights to Guam and New Zealand in the Sikorsky S-42 and the inaugural airmail and passenger flights from San Francisco to Manila in the M-130. Andre Priester, chief engineer and operations manager, developed the airline’s strict standards and the concept of multiple flight crews, whereby all personnel were trained in navigation, radio operation and engineering.

Foreign airmail routes, awarded by the U.S. government, were essential to Pan Am’s development. A contract with the Postal Service allowed an airline to gain valuable operating experience over routes that would be used for income-generating passenger service. The inaugural China Clipper flight from San Francisco Bay to Manila Bay carried 110,865 letters outbound and returned with 98,480 pieces of mail.

Comfort was a priority from the earliest stages of Pan Am’s passenger service. Aircraft interiors were designed to provide ample room and amenities for the long distance traveler. Passenger levels had spacious lounges with seats and sleepers, dressing rooms, a dining room and even a deluxe honeymoon suite—over 70 years before Airbus introduced private suites on its A380. In 1936, the 8,210-mile flight from San Francisco to Manila took six days, with a total flying time of about 60 hours. The round trip fare was $1,710, equivalent in today’s dollars to about $25,000. At each island base stopover was a Pan American Airway Inn with port stewards, chefs and attendants, to maintain a high standard of service for the overnight guests.

The San Francisco Aeronautical Society was founded in 1997 as a nonprofit organization to serve as the affiliated support group of the San Francisco Airport Commission Aviation Library and Louis A. Turpen Aviation Museum. This unique facility, located at San Francisco International Airport, opened to the public in December, 2000. As a collecting institution for research and exhibition programming, its purpose is to enrich understanding of past, present and future achievements in air transport.

An extensive library contains approximately 6,500 books on commercial, civil and military aviation, including fiction and juvenilia, 150 active subscriptions to aviation periodicals and more than 2,000 aviation and general interest magazines in runs from the 1890s to the 1980s. Technical manuals, ephemera and unique publications are maintained in subject files. Archives include photographs, architectural drawings, design drawings, maps, charts and philatelic materials.