The Case of the San Quentin Six 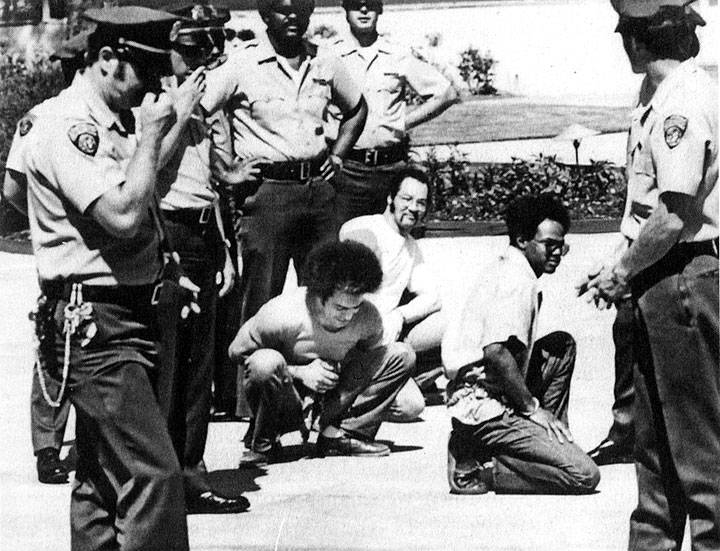 In January 1970, three Black prisoners were shot to death by a guard in Soledad State Prison in California. Three days later these murders were termed "justifiable homicide" by the local District Attorney. Later, a Soledad guard was killed and three Black men, John Cluchette, Fleeta Drumgo, and George Jackson were indicted for the murder of the guard. They became known as the "Soledad Brothers". They were found not guilty and the families of the inmates won their civil suit against the Calif. Dept. of Corrections.

These events in Januarv 1970 have set off a chain of further events leading us to the present day when six Black and Brown men are facing charges for the murder of three prison guards and inmates on August 21, 1971 when George Jackson was killed in prison. The San Quentin Six are: Fleeta Drurngo, David Johnson., Hugo Pinell, Johnny Spain, Luis Talamantez, and Willie Tate. The State alleges on theories of conspiracy that they are guilty of murder, kidnap, assault, etc. The State, claims that they joined in these acts once they started and that their aim was to kill guards and escape.

Racism in the California prison system

Dr. W. E. B. Dubois said: "... .it is not that we commit the most crimes, but we are most often arrested, convicted and sent to prison." (Compare {Vice President} Agnew's sentence with Luis Talamantez serving two life sentences for a $130.00 robbery). Close to 50% of the prisoners in California are Black, Brown and other national minorities. While a criminal like Spiro Agnew steals tens of thousands of dollars and is rewarded with a three year suspended sentence and a fine, Black, Chicano, Puerto Rican, Native American and Asian men and women are sent to prison for indeterminate sentences, ensnared by the judicial machinery, its racist judges and unconstitutional grand juries.

The real reason these six brothers are facing this trial is because over their years in prison they have resisted the racism and injustices of prison officials. Johnny Larry Spain and Hugo Pinell have been active in efforts to bring about unity among Black, Brown and white prisoners. Luis Talamantez has worked to educate and organize Chicano prisoners. David Johnson and Willie Tate led a protest of the murder of a Black inmate. Fleeta Drumgo, a Soledad Brother acquitted in 1972 of charges of killing a prison guard, is a repeated target of the prison authorities. The State admits that it has no direct evidence against any of these men.

For their resistance, the Brothers have been characterized as "militants" —meaning they have refused to be broken by racism, and the inhumanity and brutality of their prison life. They now appear daily in court chained and shackled in Marin County, the second richest county in California (except Willie, who is out on bail).

The racism prevalent in the prison system reaches crisis after crisis and the State prison authorities announce they are putting prisons in a state of "lockdown”: men are kept in cells 24 hours a day; all work, education, and recreational facilities are closed; visiting privileges, mail, and all other of the few and miserable privileges allowed in prison are suspended or limited.

The San Quentin Six Committee charges that these are preparations for a lynching of the "6" and other Brothers. Prison authorities blame the "Black Guerilla Family", Chicano groups, etc., as sources of the violence in the prisons, and therefore the excuse for the "lockdown". Prison authorities do not want to talk about the ancient, dirty prisons; or the rotten food; or the racist guards with their sadistic and fascist-like mentalities; or the whole way in which prisons are operated as impenetrable fortresses from which families and the community are excluded in decision making, nor any of the hundreds of other arbitrary and needless rules prisoners are subjected to.

Putting the blame for their own gross failures and actual crimes—on to Black and Brown prisoners further prejudices the community from which a Jury is drawn for the Brothers' trial; it increases the tension in the prison; it increases the tension of the white guards who hold the weapons. How many times have prisoners been shot while trying to "escape"? How many times have prisoners stood trial for crimes committed inside the walls and been acquitted?

The law of the indeterminate sentence has become a way of keeping men and women indefinitely. The Six Brothers have already served a total of 50 years in prison among them. The indeterminate sentence law leaves their prison fate in the hands of the Adult Authority, which is made up of ex-members of law enforcement agencies who arbitrarily and more times than not rule unjustly.

The Adjustment Center is a maximum security punishment technique used in California and other states. The conditions of these centers are so severe that the full meaning cannot be adequately described. In the last five years Inez Williams, mother of Fleeta Drumgo, has not seen her son without chains tied to ankles, wrists, and waist. These prisoners are in their cells 23-1/2 to 24 hours a day. Vocational and educational training is prohibited. The cell is totally furnished with a steel slat for a bed and a combination toilet-sink facility. All mail and literature is censored. They are allowed only one hour of visiting time a week for all their family and friends. Their half-hour exercise which is left to the whim of the guards is a solitary walk outside their cell. Whenever they leave their cell they are chained and shackled. They have filed a civil suit that challenges the constitutionality of this cruel and unusual punishment.

Relationship of Prison Conditions to Life Outside the Walls

With the rise of the liberation struggles of oppressed peoples here in the United States and throughout the world, a new consciousness and level of struggle has arisen in the prisons. The letters from prisoners printed in radical papers throughout the country; George Jackson's "Soledad Brother"; Mitford's "Kind and Usual Punishment", poems and articles in The Black Scholar, etc. all indicate this new level.

The struggles taking place outside prison walls for jobs, for good wages, lower prices, for unity of all peoples—white and all national minorities in our common fight for a better life—all these struggles on the outside have their counterpart on the inside of the prison walls. The U.S. prison system has always reflected the corruption and venality of the world outside the walls. Watergate uncovered an extensive spy center; it uncovered millions of dollars in payoffs by monopolies to the Nixon administration; bared the secret real estate and income tax deals for Nixon. But for the mass of U.S. people the word from Nixon and his predecessor is "law and order"; tighten our belts; cuts in domestic programs, wage controls and wild inflation. The men and women in prison are not only victims of these policies but are most often the direct result of these policies. The San Quentin Six epitomize the fate of prisoners all over the country who are protesting, who refuse to accept the racism and brutality any longer.

OUR BROTHERS, THE SAN QUENTIN SIX, ARE HELPING TO LEAD THIS STRUGGLE WITH THEIR COURAGE, DETERMINATION, AND WILL TO WIN. JOIN THEM WITH EQUAL STRENGTH AND COURAGE:!: