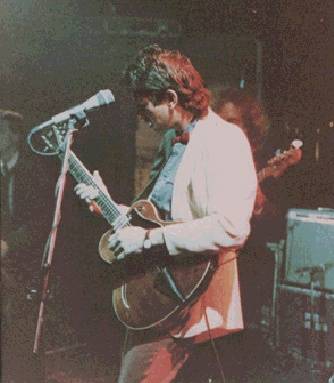 a personal memoir from colleague and friend Dick Deluxe

In the early to mid 80's the once-thriving SF music scene was in yet another periodic lull. The ghosts of the 60's were still omnipresent and frankly the scene lacked any real star power or central musical focus. The Mabuhay scene was still hanging on but the heady days of seeing Devo or the Ramones in a small club were over and while Romeo Void and others had "hits", there was little sense that our scene was more than provincial.

Although lacking any commercial breakthroughs until Chris Issak and my noisy upstairs neighbors Faith No More had national hits, our little fraternity was not shorthanded on dysfunctional behavior and personality -- thankfully. The 16th street/Valencia axis was the hub of "punk" activity and the hyperactive Jello Biafra could be seen hustling around , doomed junkie Will Shatter and his Flipper colleagues were slouching around in the shadows and the requisite army of mohawks, skateboards, tattoos and piercings were already pass by European standards. 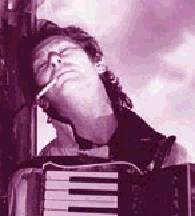 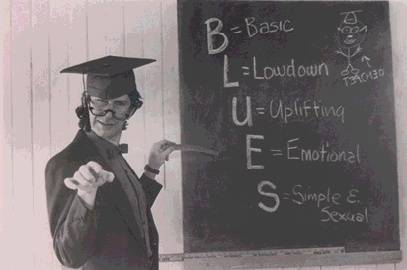 Although everyone seemed to share equal amounts of commercial disinterest and corresponding financial miasma, there was something of a pecking order among the "royalty". I can remember being frozen by the haunting beauty and charisma of Penelope Houston, whose Avengers stint (and notably, their gig at Winterland on the Sex Pistols finale) had given her mythic status. The Looters and their painfully sincere frontman Mat also commanded a sort of Che-esque vibe. One could imagine him refusing preferential seating at a Marxist bookstore reading.

But of the few in our pathetic little scene with some genuine Q rating, Philip "Snakefinger" Lithman was by far the most luminescent. I was familiar with the Snakefinger legend via a roommate who was a Residents nut and therefor worshipped all things affiliated therein. Something of a "outside" jazz purist at the time, I had a rather dim view of rock's avant garde. However, I'd seen Phil as a sideman with Long John Baldry playing ersatz Brit blues in Bellingham, Washington so I knew he could at least tune up-something at least a little rare in the DIY atmosphere of the time.

Apparently the Baldry fiasco had inspired Phil to do his own thing on his own terms and he had recently returned from a moderately successful "History of the Blues" tour of Europe when we first met. I had been drafted into a "calliope, circus music" band, the Clubfoot Orchestra, and surprisingly Snakefinger was the guitarist. After a chaotic first rehearsal/audition, Phil and I arranged to meet for breakfast so we could hold a sane conversation.

Living up to his reputation as Mr. Cool, Phil was accompanied to breakfast by the impossibly gorgeous photographer Christine Alicino whom I assumed to be lost Russian royalty or something (turns out she's from Cleveland but hey.....). Charming, funny and more than a tad cynical, Phil turned out to be considerably less full of himself than I expected. To my relief we wound up spending a lot more time discussing the merits of Charlie Christian than John Cage.

As neighbors, fellow sidemen in the perennially dysfunctional Clubfoot and connoisseurs of the "spliff" method of consciousness alteration, we became running buddies in the Mission. While I was bicycle messengering, legal temping and driving everything with wheels, Phil was often seen commuting to his housepainting gigs via skateboard. To my surprise this rascal avantist also had some more rather pedestrian passions: was I interested in hitting some tennis balls in Dolores Park?

I suppose much of my rapport with Phil had to do with the fact that I wasn't too impressed with his pedigree as a Residents sideman and hadn't listened to his solo records. More than occasionally sycophantic fans would come up and bug him endlessly for details about the Residents. Did they really sleep upside down? How many of them are there? Blah, blah blah.

While he was proud of his association with the Rez', he also was trying to shed the sideman label and was forming, rehearsing and recording his new band, under his own name, at the time. As his own tastes were somewhat more mainstream and he was hoping to put a few pesetas in the bank, he was anxious to get his own name rolling and get out from under the shadow of the eyeballs so to speak.

Most of the time Phil and I spent together was in pursuit of passions more directly linked to our indulgences--getting loaded, listening to old jazz guitar records on his ancient phonograph and chasing women. As an untrained musician, Phil spent endless hours lifting riffs painfully, note by note, off old recordings. I felt a lot of his charm as a player were his fearless attempts to force feed Herb Ellis licks into whatever solo he was playing--regardless of the context.

While he always had a great feel and never let on when he was lost or confused, Phil's lack of sophisticated harmonic knowledge lead to what I felt was the best description of him I ever read -- "the wrong note at the right time". On one hilarious occasion, we found ourselves backing Deborah Iyall of Romeo Void fame on some standards. Due to some rather creative (cough, cough) pitch approaches, I realized that between Ms Iyall, Snakefinger and the rest of us we were in at least three keys at once.

"Was that her or me?" Phil queried a little dazed by the cacophony that had begun innocently enough as My Funny Valentine.

Not to put the knock on Phil the musician, as he was a true original: fearless improvisor, eclectic writer, master of the clever cover selection, generous-to his-mates-frontman and more. The more I suppose is related to his Q--the most charismatic cat I've been on the bandstand with--the object of women's fantasies and the envy of other guitarists. Despite being in over his head technically in the music-school-refugee cult band Clubfoot (where reading was damn necessary to get through Richard Marriott's knotty compositions), he managed to always outshine his more educated bandmates when the solo spotlight shined his way. He never failed to kill us with his wacky mixtures of quasi-George Benson, out-of-control Dick Dale and pure Snakefinger.

Also I must add that he was a monster Freddy King style bluesman as well. Phil could put the stumble in The Stumble like nobody's business.

Did I mention he did quite well with the ladies as well?

At any rate, it was wicked good fun and for a while we were minor potentates in a diminished kingdom. Occasionally someone like Paul Kantner from the Airplane would wander into a club gig at the Mabuhay and I'd think--why them and not us? The '60s had been good to musicians in the City, but by our era it was pretty deadsville--at least by comparison. While our generation was not exactly filled with undiscovered giants, I was somewhat less than impressed by the now out-of-vogue hippie bands. The remaining "legends" from that era that I was accompanying as a sideman occasionally were not world beaters in the talent or knowledge department as far as I could tell.

I must admit that Phil and I were not shy about our disdain for our elder brethren and on occasion it took an ironic turn. One night during a brief period of post-album release euphoria, we were headlining a sold-out (i.e 86 people or so) Chi Chi Club show on Broadway. That evening at the neighboring Stone, during the we're-broken-up-because-of-artistic-differences period he soon got over, a rather pathetic looking Joe Perry of Aerosmith was headlining to an empty room.

Being the self-important taste makers we were, we took a little stroll by the gig and after sniffing the air briefly turned heel and returned to the far more relevant proceedings we were holding at the far hipper Chi Chi.

"What a moron, he'll be dead in a month"

This was obviously before the Run DMC- fueled return to favor, but the thought that anyone would pay two cents for anything Aerosmith ever again seemed remote at the time. Needless to say this type of insight into popular culture and the music business explains a lot about our relative positions of wealth and influence in later years.

Somehow though we felt our turn was coming and indeed Phil soon abandoned side gigs like Clubfoot and began the focused pursuit of his own band and vision.

Fortunately, and in recognition of his skills as a leader and personality, Phil was able to put together a hell of a band. Eric Drew Feldman, whom I had replaced on bass in Clubfoot the previous year, came aboard as musical director, collaborator and producer. The former Captain Beefheart multi-instrumentalist (currently with PJ Harvey and any number of other hipsters) brought Phil a much needed sense of song structure and musical discipline. Eric was key to getting a lot of the ideas Phil had floating around in his head into some sort of tangible form.

I can remember Phil, Eric and colleagues Guy, Johnny and Miguel grinding away in rehearsal as they worked on the material for the record and tour that was sadly Phil's last hurrah. All "ear" musicians, these poor cats spent hours working up the complex and quirky passages that made up the bulk of Phil's original material. And while jazz cats may have been able to sight read the gig had someone been able to score it, there is no way they would or could have had the punk energy and nave belief in the intrinsic value of the music it needed to go over.

Fortunately the boys made it into the studio and recorded Night of Desirable Objects as a testament to their work. They also were caught live to good effect in Chicago while on a brief U.S. tour. Though only featured as a leader on a few now out-of-print albums on Ralph, a fair amount of recorded Snakefinger is available still--most of it with the Residents and their assorted label mates. As is the method these days I recommend a "Snakefinger" search; and much lore is available.

As hoped, the album created enough of a buzz to organize a European tour. The biological cards were against him however and the genetic heart problems that had required open heart surgery in previous years and had promoted unheeded warnings from his doctors felled him. After a triumphant show in Linz, Philip Lithman passed at the way early age of 39.

His friends and fans can never suppress a smile when his name comes up. Recently I was having a beer with "Ben Guy", Phil's dear friend and bassist who was on tour with Phil at the end. Sure enough, after a sad moment of reflection we were trading yarns and once again laughing as Phil would have, I imagine, wanted it .

Guy, who has been running the notorious Hotel Utah for over a decade and is a terrific singer-songwriter himself, and I were musing about what Phil might be up to now were he still among us. But whether he would have retired to a Mongolian yurt or be headlining on the shed circuit by now is beside the point. Most certainly he would continue to be the entertaining, inspiring good friend to those around him he was when I was fortunate enough to be his pal.