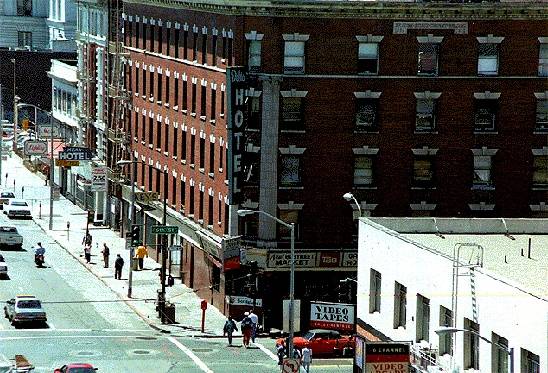 The Delta Hotel at 6th and Mission, a residential hotel which burned in 1998 in the most recently targeted area for "redevelopment." 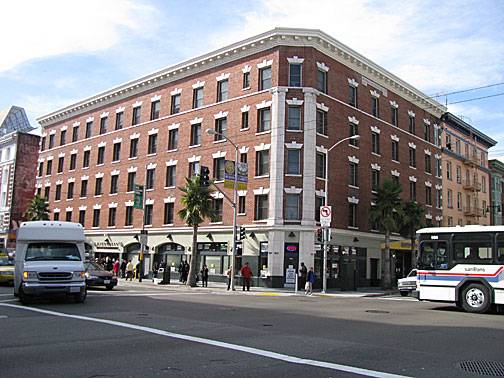 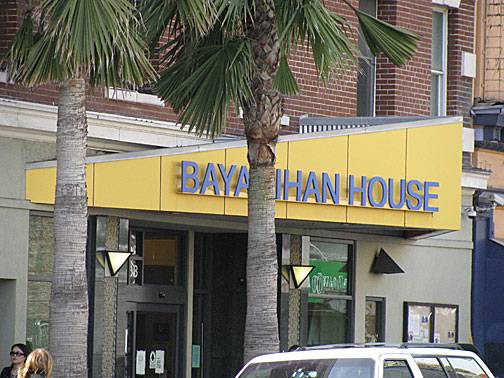 It is August, 1977. Thousands of San Francisco Bay Area activists have jammed the streets in a final effort to stave off the eviction of elderly Filipino tenants at the International Hotel. The International Hotel has already become a symbol for the planned massive displacement of San Francisco's low-income residents, who stand in the way of expanded commercial and downtown development. The hotel's mysterious owner, the Hong Kong-based Four Seas Investment Company, has announced no plans for the site after eviction of the tenants and demolition of the hotel. Despite massive protests, San Francisco's liberal political leadership, from Mayor George Moscone to powerful Congressman Phil Burton, did not prevent the tenants' eviction. Two years later, Mayor Dianne Feinstein refused to oppose the hotel's demolition, and the heart of a once-thriving Manilatown was levelled.

The ability of a rarely seen liquor magnate from Thailand to evict nearly 100 elderly tenants for no stated reason perfectly captures the state of landlord-tenant relations in San Francisco in 1977. No laws stood in the way of landlord greed. San Francisco landlords could force longterm tenants to move by simply issuing an eviction notice and awaiting the sheriff's arrival. Landlords could raise rents as much, and as often, as the market could bear. The absence of any government regulation of rent increases or evictions enabled landlords to replace low-income and working-class tenants with those who could afford costly rents. This process of "gentrification" was not only fueled by the absence of government regulations, but was also encouraged by federal tax laws. All of the funds spent renovating and gold-plating rental units for occupancy by higher-paying tenants could be deducted from a landlord's taxes as a business expense. Even better, residential landlords could deduct a pro-rated share of the building's cost on the theory that the value of a four-unit Victorian, like a piece of machinery, steadily decreases over time. This depreciation deduction, along with the mortgage interest tax break associated with real estate ownership, made residential real estate a popular tax shelter during an era when high incomes were still taxed at a 70% rate.

When the 1981 supply-side economics tax law reduced top personal income tax rates, real estate lobbyists obtained even greater benefits for their industry. The 1981 law allowed investors to deduct double the annual depreciation, so that the cost of purchasing a building could be written off in only fifteen years. These unprecedented incentives for real estate tax shelters intensified speculative pressures at a time when gentrification, displacement, and rising rents were already afflicting urban America. Investors' ability to deduct virtually the entire cost of being landlords, then quickly profit from rising real estate values had a particular impact on attractive cities like San Francisco. From 1982 to 1986, when a new tax law repealed the 1981 benefits, San Francisco tenants faced a housing market where rents were rising at unprecedented rates.

Government encouragement of real estate investment, speculation, and gentrification reflected the real estate industry's tremendous political power. This was particularly true in San Francisco, where tenants in 1977 had few allies. Mayor George Moscone had been swept into office by a tremendous grassroots campaign and had a long record as a liberal state legislator. However, he refused to anger his real estate backers, who included major contributors to the Democratic Party. Like his ally, then-Assemblyman and current Mayor Willie Brown, Moscone symbolized San Francisco's liberal politicians: culturally tolerant, staunchly pro-labor and civil rights, but supportive of poor people's interests only if they did not clash with the interests of the politicians' allies in the corporate and real estate sector. Because enacting laws protecting tenants necessarily restricted landlord power, San Francisco's liberal politicians wrung their hands over the I-Hotel eviction and other injustices to tenants, but refused to take action.

As 1978 began, the I-Hotel evictions, rising rents, gentrification, and the rapid displacement of low-income people from neighborhoods were increasingly discussed as part of a broader urban crisis. While poverty, unemployment, and a host of related ills had long plagued urban America, what changed in the 1970s was the transformation of previously undesirable real estate into venues for speculative investment. Like the I-Hotel tenants, people of color often occupied the rundown buildings and communities that were prime targets for landlord profiteering. The urban housing crisis thus fused those who were primarily focused on supporting struggles of people of color with activists engaged with class and economic issues. As housing politics became a central arena for progressive political struggles, committed young activists with a broad political analysis came to be part of San Francisco's burgeoning tenant movement.

A spark was needed to ignite this budding political force, and it came from a surprising source: Howard Jarvis, a longtime landlord lobbyist and anti-tax activist. Jarvis's Proposition 13 on California's June 1978 ballot is best known for ushering in a nationwide tax-cutting frenzy. While Proposition 13's tax-limitation provisions continue to damage the state's finances, Proposition 13 also created a groundswell of public support for laws restricting landlord power over tenants. How did a measure designed to benefit residential and commercial landlords galvanize tenants and lead to the widespread imposition of rent control? Blame landlord greed.

Because Proposition 13 significantly reduced property tax assessments, its supporters argued that tenants should vote for the measure so that they could share in their landlords' tax savings. However, after Proposition 13 passed, few tenants realized any savings. Angry at being deceived, tenants in many cities responded to Proposition 13's deliverance of huge tax rebates to landlords by going to the ballot to recover their fair share. In San Francisco, tenant activists created a November 1978 ballot measure (Proposition U) that required landlords to rebate 100% of their Proposition 13 savings. While the Proposition U campaign was conceived and led by tenant activists, this nascent electoral effort drew strong support from the Catholic Archdiocese as well as labor and social justice activists previously uninvolved with tenant concerns. Mayor Moscone and his liberal allies maintained their refusal to challenge real estate power and refused to support the measure. Moscone's endorsement would have helped refute opposition claims that Proposition U was too "radical," and his failure to give Proposition U his stamp of approval likely affected the outcome. Despite this lack of political support, and being outspent 25-1 by landlords, Proposition U narrowly lost 53-47. The closeness of the race surprised experts and encouraged tenant leaders to explore a new ballot measure.

The 1978 election results foreshadowed three important developments. First, the I-Hotel struggle and rising real estate values had increased insecurity and hence militancy among tenants, particularly seniors with a high voter turnout. Second, the 1970s downtown highrise boom was already changing the demographics of San Francisco's tenant population. As tenants became increasingly college-educated and white-collar, and had higher incomes, the tenant vote increased as a percentage of the electorate.

Third, the November 1978 ballot saw significantly increased public activism among San Francisco's gay and lesbian community. San Francisco had already become a gay mecca, and activists had elected openly gay leader Harvey Milk to the Board of Supervisors in 1977. The statewide November 1978 ballot, however, included a measure (The Briggs Initiative, Proposition 6) that galvanized and substantially broadened gay and lesbian political activism. Proposition 6 would have barred gay and lesbians from teaching in public schools. Defeating the measure became a crusade for gay and lesbian activists, and San Francisco's No on 6 campaign involved hundreds, if not thousands, of active volunteers. After the defeat of Proposition 6, many of these volunteers became involved with tenants rights. This transition was not surprising since gay and lesbian activists were primarily tenants whose clubs and organizations reflected their progressive political sympathies. For gay and lesbian tenants of the late 1970s, San Francisco was a safe harbor; being priced out of their home and forced to leave their city of refuge had particularly severe consequences.

After barely surviving Proposition U, San Francisco landlords needed to calm the waters so as to not jeopardize their continued ability to profit from an unregulated real estate market. This strategy was immediately and irrevocably sabotaged by one of San Francisco's leading apartment owners, Angelo Sangiacomo. Sangiacomo's vast holdings primarily housed older, middle-income, white tenants. This demographic group was not much in evidence at I-Hotel protests or the Proposition U campaign. Ignoring the broader political context, Sangiacomo chose a historical moment of rising tenant anger to impose huge rent increases on his tenants. In so doing he became to be known, and by landlords scorned, as the man who brought rent control to the city.

With Sangiacomo suddenly having made the dreaded words "rent control" thinkable, Mayor Dianne Feinstein, who assumed power following the November 1978 assassination of George Moscone, faced a choice. Feinstein was closely aligned with real estate interests and had few links to the progressive groups that had elected her predecessor. If Feinstein did nothing, she risked the emergence of a liberal challenger running on a housing crisis platform in the November 1979 mayoral election. Her inaction might also pave the way for SFAH's strong rent control initiative to win a sweeping victory. Rather than risk the occurrence of either possibility, Feinstein won legislative passage of a 60-day prohibition on rent increases. After this moratorium expired, the city adopted a moderate Rent Stabilization Ordinance in June.

San Francisco's enactment of any form of rent control was considered by many to be astonishing. Landlords were furious, feeling that Feinstein should have weathered the storm and waited for the voters' verdict on SFAH's November ballot measure. SFAH also criticized Feinstein, seeing the city's adoption of weak rent control as a strategy to preempt their own comprehensive solution to the city's housing crisis. SFAH proceeded with their initiative, assuming that voters would recognize the need for stronger action. They were wrong, as became obvious after SFAH's Proposition R lost by a huge 59-41 margin in the November 1979 race. While the low-turnout election expanded the margin of defeat, it was clear that swing voters felt that Feinstein's rent law had addressed the problem and should be given time to work.