THE CHRISTENSEN BROTHERS AND THE SAN FRANCISCO BALLET

from the San Francisco Ballet's history 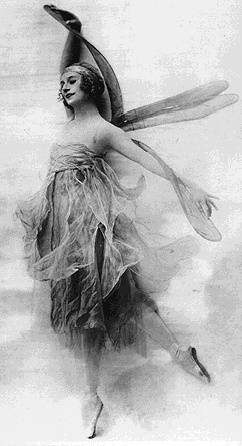 Anna Pavlova, ballerina (1882-1931): Perhaps the most idolized ballet star of the 20th century, the Russian-born dancer tirelessly toured the world, inspiring a love of dance in all who saw her. She visited ballet-crazed San Francisco nearly every year between 1910 and 1925.

America's oldest classical ballet company, the San Francisco Ballet, is the result of the dedication, talent, and determination of three special men: the Christensen brothers, William (1902-), Harold (1904-1989), and Lew (1909-1984). Often considered responsible for the introduction and success of classical dance in the western United states, the brothers brought to their art a long heritage and a great love of dance. Trained at an early age by a father who was himself a dance teacher, the three brothers pursued the dance wherever it took them--to dancing school, vaudeville, movies, and ultimately San Francisco and the world.

In the 1920s, ballet was gaining popularity in vaudeville, and William and Lew Christensen joined the circuit--the only vehicle for dance at that time in the western United States.

In the early 1930s, many dancers left vaudeville to pursue careers in film. In 1934, Harold and Lew Christensen went to New York, first to appear in The Great Waltz, a lavish and highly successful operetta presented at Rockefeller Center. The show's schedule allowed the brothers to attend classes at the School of American Ballet, which had just been opened by Lincoln Kirstein for George Balanchine.

Harold Christensen taught at the San Francisco Ballet School from 1940 until his retirement in 1975. During this time, he trained three generations of dancers, many of whom went on to perform with ballet companies around the country.

1933--A WATERSHED YEAR FOR AMERICAN DANCE

While there was ballet in this country prior to 1933, it consisted mainly of European companies such as the Ballets Russes and great stars like Anna Pavlova. However, 1933 marks the beginning of what could be called the "institutionalization of American dance."

Between 1939 and 1944, William choreographed three full-length ballets, three of them American premieres:

Swan Lake (1940), the first full-length American production of this Russian classic. The entire production, dedicated to the preservation of Russian culture in San Francisco, was under the patronage of the Tchaikovsky Centennial Committee, a group of Russian emigres headed by Prince and Princess Vasili Romanoff.

Nutcracker (1944), the first full-length version of this classic ever presented in this country. The full score was available only through the Library of Congress. Christensen drew on the memories of George Balanchine and Alexandra Danilova, both of whom had performed the ballet in Russia.

Trained from boyhood in music and dance, Lew showed exceptional promise from the beginning. During the demanding years of touring in vaudeville--where virtuosity, innovation, and spectacular dancing were a must for success--Lew studied classical ballet wherever he could.

In 1934, with vaudeville on the wane, Lew and Harold Christensen began studying at the newly opened School of American Ballet, established by Lincoln Kirstein for George Balanchine as the source and base of operations for a future performing company. Two years later, the two brothers joined Balanchine's company, which served as the Metropolitan Opera Ballet.

Lew's career was cut short by World War II. After a stint in the Army, he was too old at 37 to regain his position as a dancer, but he did dance with Balanchine's Ballet Society.

"Suddenly Lew appeared, completely endowed and equipped. As a potential 'personality' he was a focus of our stripling season, the prize of fashion photographers from Vogue and Harpers Bazaar. He surprised everyone ... What astonished Balanchine were the brothers' technical expertise, their Danish neatness, Italian virtuosity, American freshness, and candor. And especially Lew. Only in the superb photographs by the camera genius George Platt Lynes is justice done to the apparition that was then Lew, posed in the studio, timed and placed for the lens by Balanchine himself."

LEW CHRISTENSEN AS DIRECTOR AND CHOREOGRAPHER

During the late 1940s and early 1950s, Lew came regularly to San Francisco to work with his brother William. In 1952, Lew assumed directorship of the San Francisco Ballet. He held this position for 32 years until his death in 1984. Under his tutelage, the company grew immensely, making its East Coast debut in 1956 and undertaking three prestigious international tours during the 1950s under the auspices of the U.S. State Department.

Between 1937 and 1965, Lew Christensen created or restaged more than 100 ballets for San Francisco Ballet, including Filling Station, Con Amore, Beauty and the Beast, Coppelia, A Midsummer Night's Dream, Nutcracker, Swan Lake, and Jinx.

Russell Hartley (1922-1983), a Bay Area native, joined the San Francisco Ballet in 1942 as both dancer and designer. During his long association with the ballet, he created costumes for more than 20 works, including the first full-length Nutcracker in America (1944).

In 1975, Hartley's collection moved to the Presidio branch of the San Francisco Public Library and became the Archives for the Performing Arts, remaining there until 1981.