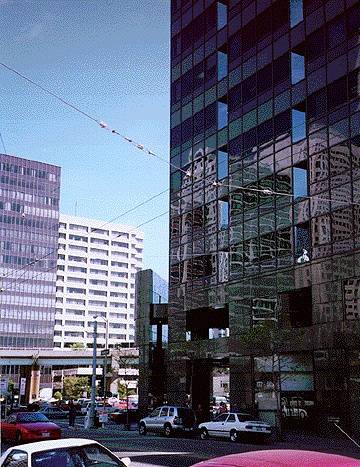 Tar Flat was rediscovered as a layer of toxic mud beneath this skyscraper built at Beale and Howard in the late 1980s.

Most workers for the industries lived west of First Street, in the three blocks south of Market. To provide more houses, the 100-vara blocks were subdivided by inner streets. Annie, Jane, Jessie, and Stevenson streets divided the block between 2nd and 3rd Streets into nine sub-blocks. Along these inner streets, small houses sheltered the families of the workmen, often with lodgers and/or backyard dwellings, flats, and outhouses.

A dominating force in the lives of neighborhood people was the Donahues' gas works. At the northeast corner of First and Howard, the plant distilled coal to manufacture illuminating gas. It successfully introduced gas lighting to San Francisco early in 1854, over the years absorbing all competition and re-incorporating in 1905 as the PG&E (Pacific Gas and Electric Company). At first, coal gas technology, less than forty years old, was quite primitive; distillation temperatures were too low to separate byproducts. The sludge waste was dumped into still-open water at Fremont Street on the eastern edge of the plant's compound.11

This sludge killed the shellfish and the industry that harvested them, and it spread such an odor that the neighborhood was nicknamed "Tar Flat." Workers living near Mission Street were in the thick of it. Mothers brought sick children into the plant compound, believing the fumes would cure whooping cough. The sludge reappeared a century and a quarter later, a three-to-five-foot layer of it, in the excavation for a new building in the former tidewater. Construction had to stop while special workers removed the still hazardous waste. Without environmental controls, the gas company continued producing the dreadful stuff until better technology recovered by-products and more gas. Also, by about 1867 the dumping had become complicated because the nearby tidewater had been filled. . .12

. . . By the last decades of the nineteenth century, the tarry smell had dissipated through better technology, but the nickname "Tar Flat" persisted. It indicated an area of increasingly dense housing for manual workers, recent immigrants, and out-of season migratory laborers. Roomers, backyard buildings, boarding houses, and residential hotels crowded all the spaces around, behind, and above the commercial uses. Nowhere could any of the former professional or middle-class inhabitants be found. One observer described the Third Street neighborhood in the depression year of 1878:

The scene is a long busy street in San Francisco. Innumerable small shops lined it from north to south; horsecars, always crowded with passengers, hurried to and fro; narrow streets intersected the broader one, these built up with small dwellings, most of them rather neglected by their owners. In the middle distance were other narrow streets and alleys where taller houses stood, and the windows, fire-escapes, and balconies of these added great variety to the landscape, as the families housed there kept most of their effects on the outside during the long dry season.

[The observation post]...was the highest of the tinshop steps at the corner of Silver and Third Streets . . commanding a fine view of the inhabitants, their dwellings, and their business pursuits. The activities in plain sight were somewhat limited in variety, but the signs sported the names of nearly every nation upon the earth.

The Schubeners, Levis, Ezekiels, and Appels were generally in tailoring or second-hand furniture and clothing, while the Raffertys, O'Flanagans, and McDougalls dispensed liquor. All the most desirable sites were occupied by saloons, for it was practically impossible to quench the thirst of the neighborhood. There were also in evidence barbers, joiners, plumbers, grocers, fruit-sellers, bakers, and vendors of small wares, and there was the largest and most splendidly recruited army of do-nothings. . .[I]n many cases the shops and homes ... were under one roof, and children scuttled in and out, behind and under the counters and over the thresholds into the street.38

The observer was Kate Douglas Wiggin, author of Rebecca of Sunnybrook Farm. At the age of twenty-one, with a new kindergarten teaching diploma in her pocket, she "had a vision of how wonderful it would be to plant a child-garden in some dreary, poverty stricken place in a large city, a place swarming with unmothered, undefended, under-nourished childlife." In September 1878 she became the founding teacher of her vision, the first free kindergarten in the West. Her Silver Street Free Kindergarten was Located on an inner street off Third, five and a half blocks south of Market Street. Though a stranger to the neighborhood and culture, she soon enrolled fifty children under the age of six, and her success quickly became legendary.39

Wiggin was not alone in seeing need among the multitudes south of Market. In 1870 the city government began to contribute half of the fines imposed for offenses, up to $5,000 a year, to a charitable fund. Administered by the San Francisco Benevolent Association and augmented by private donations, the fund provided such supports as groceries, meal tickets, lodging, and transportation to persons in want.40

By 1880 the locations of public schools south of Market indicated that families with children had been moving away from the immediate neighborhood to the southern and western parts of the district. Primary schools were found on Fifth, Howard, Silver, and Eighth streets, grammar schools on Fifth, Silver, and Eighth streets. There were also an ungraded school on Harrison and a "colored school" on Howard.41