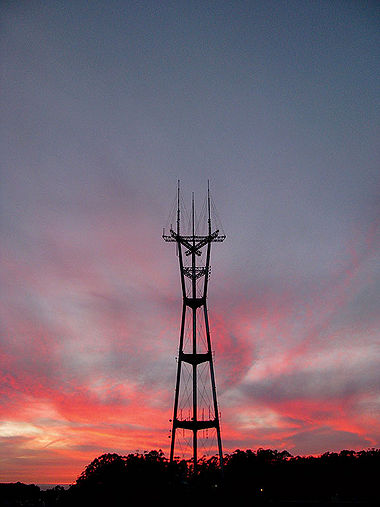 In 1970, San Franciscans had a choice. They could keep abreast of the TV exploits of Dr. Marcus Welby, M.D., or they could nix a 997-foot antenna atop an 817-foot mountain, the entire structure towering 1,814 above sea level. The doctor won out. Sutro Tower went ahead.

Before the tower, San Francisco’s hill-filled topography allowed for very spotty television reception. The tower was meant to correct that and provide all citizens with equal access to Ultra Ban 5000 commercials.

Actually, it’s not quite correct to say that San Franciscans had a choice. The project, approved in 1967, began construction in 1971 and was completed in 1973, and was well underway before anyone was paying much attention. That’s because the tower was the baby of the major local TV stations, including KRON owned by the Chronicle Broadcasting Co. One need not be a conspiracy theorist to understand that the stations were eager to get the project going in order to fend off the cable revolution coming over the not-too-distant horizon. Thus, the media moguls, reasonably enough, did not place tower developments as the lead story on the 10 o’clock news.

As the tower began to rise there was something of an uproar. Planning Director Allan Jacobs said that the tower was “pretty terrible—aesthetically, environmentally and from about every standpoint you can imagine,” but he had not been planning director in 1967 when the project was approved.

Dianne Feinstein, then a San Francisco supervisor, said the tower was “undoubtedly one of the worst structures, visually, I have had an opportunity to view.”

Herb Caen feared that the creature, reminiscent of nothing so much as a robotic villain from a ’50s sci-fi flick, would “stalk down the hill and attack the Golden Gate Bridge.” But the construction ball was rolling and unstoppable. Now, more than 35 years later, the tower, San Francisco’s most visible landmark when approaching the city from the east or south, is accepted by most and even loved by a few.

Excerpted with permission from Art Peterson's book, "Why Is That Bridge Orange?" published in 2013, by Inquiring Minds Productions.
Retrieved from "http://foundsf.org/index.php?title=Sutro_Tower&oldid=33634"
Share this page: