Suicides from the Bridge

Part One by Ann Garrison 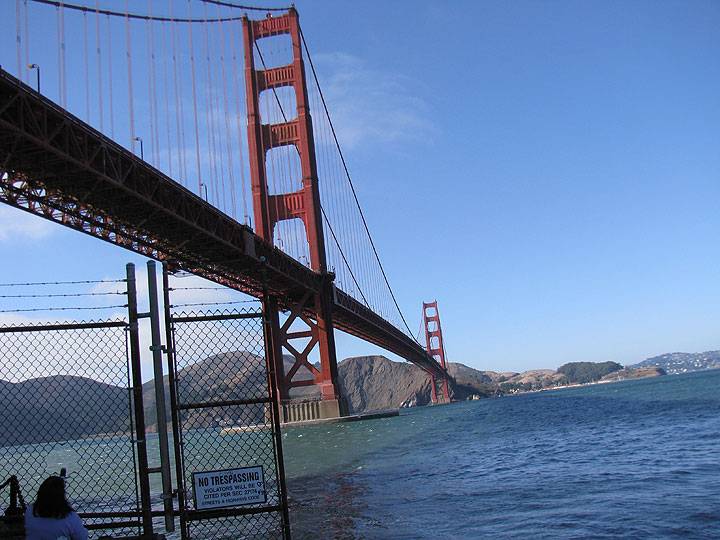 The Golden Gate Bridge from Fort Point, directly below the south end.

San Francisco celebrated the bridge's opening in 1937, and less than three months later, H. B. Wobber, a 49-year-old bargeman, strolled across it chatting with a tourist and then, halfway back, climbed up and over the railing, without explanation and much to the tourists alarm. Since then, more than 1000 people have jumped to their deaths, and many who jumped unseen, perhaps at night or in fog, and perhaps including Weldon Kees, have washed to sea uncounted. A strong current runs oceanward beneath the bridge and sharks feed there and beyond.

Suicide is only one of many dramas acted out on the bridge; the city's landmark structure has long been a stage for street theater. Protesters stopped bridge traffic to protest the Gulf War, the politics of AIDS research, and most recently, corporate plans to cut down the ancient redwoods of the Headwaters Forest. Local legend has it that draft dodgers climbed the bridge towers and threatened to jump to earn mentally unfit draft status during the Vietnam War. While bridge theater has ranged from the revolutionary to the farcical, suicide has been the tragic and most oft repeated performance.

Jim Jones, leader of the Peoples Temple, delivered one of the most momentous bridge soliloquies on Memorial Day, 1977, when he and a group of his followers joined 400 anti-suicide activists in the bridge toll plaza to commemorate bridge suicides and demand the erection of a preventive barrier atop the railing. Jones, by then feeling persecuted by defectors, media, and government, told the crowd that he had been in a suicidal mood himself that day, and that he had personal empathy for what we are doing here today. The next year, on November 18, 1978, he and 913 followers committed mass suicide at their compound in Guyana, after killing all their dogs, fish, and farm animals along with their pet chimpanzee, Mr. Muggs. (Chidester 1988)

Long before the toll of Golden Gate Bridge suicides passed 1000, the bridge had become the best-known suicide site in the Western world, and San Francisco had been accused of taking a perverse pride in its reputation. Tour bus drivers cited the death toll as they passed the bridge, the city's daily papers announced each leap, and other newspapers, magazines, and even television documentaries described The Esthetics of Suicide (Newsweek, January 9, 1961), The Golden Leap (Time, August 24, 1970), The Bridge of Sighs (Newsweek, August 13, 1973), and Golden Gate Bridge: Site of Beauty and Despair (AAS Newslink, July 1987).

When 997 people had purposely concluded their lives on the bridge, authorities stopped releasing the number for fear that potential suicides would rush to make headlines with the 1000 leap. Nevertheless, the San Francisco Examiner announced number 1000, having kept its own tally.

Though bridge suicides have accounted for only a few percent of San Francisco suicides, the city at the same time became known as the country's suicide capital, year after year reporting a higher rate of self-murder than any other U.S. city. The San Francisco Bay Guardian (May 17, 1996) called its home suicide city. . .

The city's suicide rate has declined very slightly since mid-1991, when someone assigned the task of retrieving the bodies of Golden Gate Bridge jumpers to the Marin County Coast Guard Station. Now, to be counted in San Francisco, one has to jump far enough on the city side to land on the ground. As a result, the city has counted only nine Golden Gate Bridge suicides in the past four years, compared to 56 in the four years before.

Though our suicide rate may not lead the nation's for poetic or romantic reasons, we may indeed lead in our support of suicide as a personal choice that authority should not contravene. As the AIDS epidemic advanced, the city's gay community organized not only to help the afflicted live but also to help them die. In 1993, Hemlock Society co-founder Derek Humphries spoke here, saying that AIDS had permanently transformed the right-to-die movement:

For the first five years we were an elderly organization; it was just me and a bunch of old women. And then, in 1985, when AIDS became quite a public matter, we went from the sea of grey-haired ladies to a lot of young people. And then a lot of nurses and doctors who treated AIDS patients started getting involved because it changed for them when they saw young people dying. (Bay Area Reporter, May 20, 1993)

Those San Franciscans who insist on the right to design one's own death echo an argument with roots in ancient Greece and Rome, where suicide was on the whole a respected choice. Socrates committed the most rational suicide; Plato taught that suicide was justifiable in cases of extreme sorrow, unavoidable misfortune, or intolerable disgrace; Epicurus urged men to weigh carefully whether they would prefer death to come to them or would go themselves unto death; and the Stoics held that he is at liberty to die who does not wish to live.

Forty-four years have passed since the Golden Gate Bridge Authority set the first barrier design aside. Though the authority has never raised the a liberty defense, its repeated decisions against erecting a suicide barrier have been consistent with San Francisco's longstanding preoccupation with personal freedom. Gay mecca, heart of the hippie revolution, bastion of political radicalism, home to left, right, center, and cyber libertarians, this is a city where morning and evening traffic reporters routinely warn of demonstrators slowing cars to assert their rights or the rights of others. Less often, they warn of traffic jams on the bridge caused by suicides or attempts. What are we known for more than our tolerance and determination to pursue our own paths except, perhaps, the Golden Gate, our beautiful, lethal bridge? 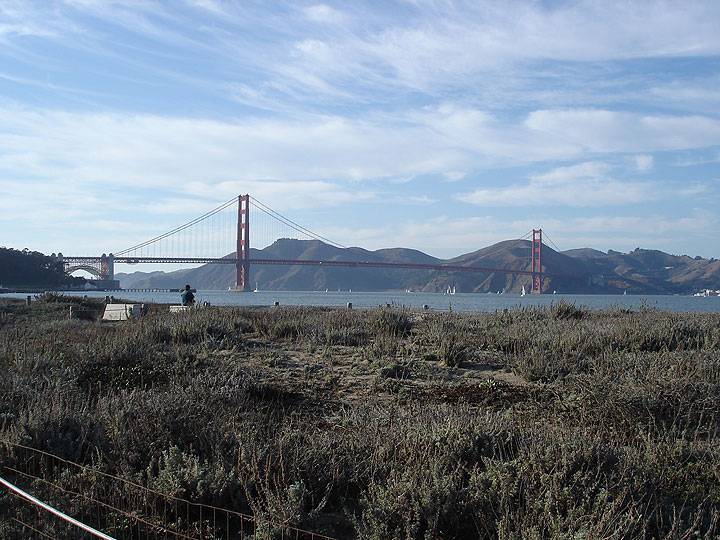 Golden Gate Bridge with the Marin Headlands in the background, restored dunes at Crissy Field in foreground, 2009.

A year-and-a-half before he led the biggest mass suicide of modern times, Jim Jones and six hundred of his followers participated in a massive anti-suicide demonstration on the Golden Gate Bridge. Each protester wore an armband bearing the name of a suicide who had gone off the bridge; the object was to convince the bridge authority to install suicide barriers to prevent people from climbing the low railing and leaping to their deaths. The media showed up, and Jones delivered a speech which, in retrospect, seemed chillingly ironic. Some excerpts:

"Suicide is a symptom of an uncaring society ...The suicide is the victim of conditions which we cannot tolerate, and ... (pause) ... I guess that was Freudian because I meant to say, `which he cannot tolerate,' which overwhelm him, for which there is no recourse ... I have been in a suicidal mood myself today for perhaps the first time in my life, so I have personal empathy for what we are doing here today. Thank you."

(Another weird demonstration occurred here in 1965, when topless dancer Yvonne D'Angers chained herself to the Bridge to protest her impending deportation to Persia.)