by Mae Silver, from the Sixth Star 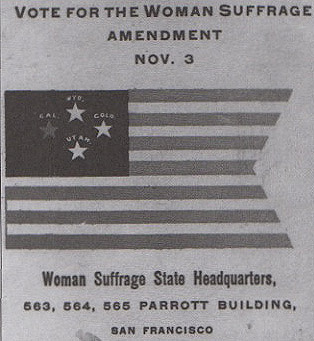 In 1896, California women hoped to capture their right to vote, thereby adding their Fourth Star to the woman’s suffrage banner. Women could vote in Wyoming (1869), Colorado (1893) and Utah (1896).

This campaign badge was silky yellow, fringed at both ends. Yellow, or more precisely, California gold, was the official color of the suffrage movement and campaigns in California. On November 3, 1896, a majority of 20,000 San Francisco men voted against the proposed amendment to the state constitution giving California women the right to vote. The amendment listed last, No. 6 on the ballot, attracted, according to the San Francisco Examiner, “...many more votes...than any of the other 5 amendments proposed.” Implied in this observation was the idea that the heavy hand of the liquor establishment had directed even the most inebriated fingers to mark an “X” on the last box of the amendment ballot. Suffragists had tried to prevent their amendment from being either first or last and secured, they thought, an agreement from the appropriate state official to keep their amendment in the middle of the list. They were dismayed and shocked to see their amendment listed last.

Smarting from this defeat, California suffragists met two days later, November 5 and 6, 1896 at Golden Gate Hall, San Francisco. Their eyes were on the next campaign. The fight was not over.