by Paul Totah, republished from Spiritus Magis with permission. 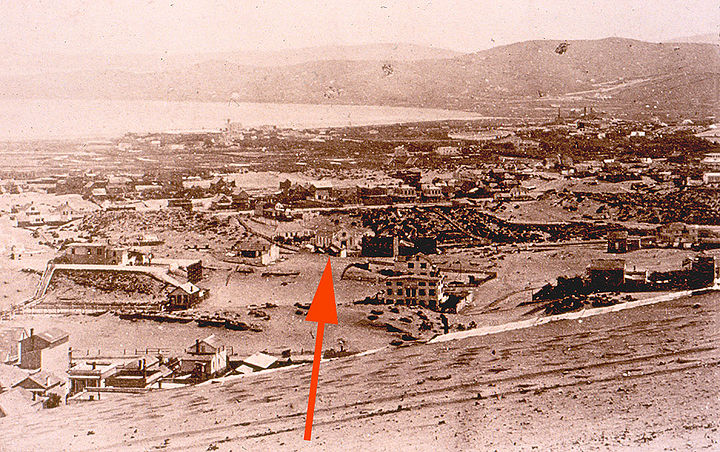 St. Ignatius College at end of arrow in this 1857 view from top of Nob Hill looking south across the area that became the Tenderloin, Market Street, and the South of Market. 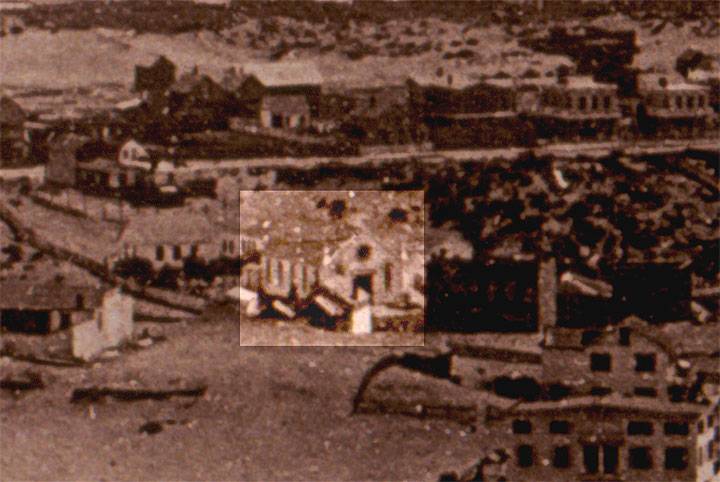 Despite a slow start, St. Ignatius College (which later split into the University of San Francisco and St. Ignatius High School) took root in the shifting sands of Market Street, and then transplanted itself five times before landing at the sixth and present site in the Sunset District.

In 1855, Market Street made an abrupt stop at Third Street, and only sand dunes and low dune plants, with an occasional shanty, could be found to the west. The first site of St. Ignatius College ran along a street that existed only on planners’ maps, in an area known as St. Ann’s Valley (though it was far from a verdant valley) in a narrow depression between two sand hills. Each time Fr. Anthony Maraschi, SJ, went out to inspect the property, he found it looked a little different as the dunes constantly changed shape with the shifting sands.

Also, if the $11,000 price Maraschi paid seems exorbitant for land in the middle of uninhabited sand dunes, the amount seems even more extraordinary when we learn that, in today’s dollars, the price would be more than $200,000. San Francisco real estate, among the most costly in the nation today, sold at a premium ever since the Gold Rush.

“We had thus come to the beginning of April [1855] without doing anything, when Fr. Maraschi requested his Grace (Bishop Alemany) to open his mind plainly with regard to the part of the city where he desired we should start our establishment, it being the will of the Superiors of the Society not to depart from his views on the matter in question. Then His Grace pointed with the pen on the map of the city, just to the place where we are, saying that thereabout was the place where he would like we settle ourselves. It pleased Almighty God to dispose that precisely the very lot which His Grace had marked out with his pen, should be for sale a few days afterwards.”

About this location, Maraschi is reported to have said, “Here, in time, will be the heart of a great city.” History proved him an apt prophet.

Fr. Joseph W. Riordan, SJ, in his history, recounts this incident differently, noting that Alemany pointed to the parcel not with a pen but with “a sweep of his hand toward the unoccupied lands,” and telling Maraschi to build “any place over there!” Whether Alemany pointed with pen or with a sweep of the hand, it is easy to speculate that his primary desire in locating SI so far from the people of San Francisco was to protect his own struggling churches from competition with the Jesuits. 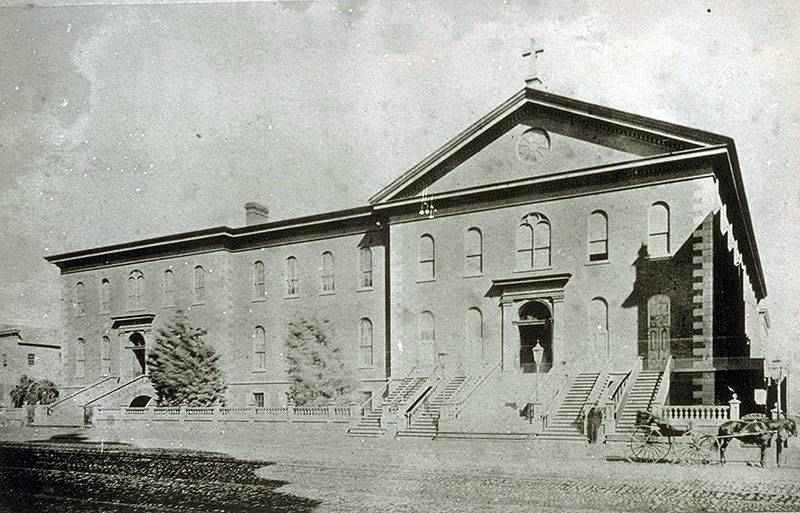 Alemany insisted that the Jesuits not take up a collection to fund their new school and church, forcing the Jesuits to fund the venture through loans. Maraschi added that “whilst we were building, somebody spread through the city that we were doing it without permission and against the will of His Grace.” The archbishop dispelled that rumor by preaching at the church’s opening. However, he also arranged a meeting between the Jesuits and his diocesan priests to fix “the limits of the district attached to our Church, subject to any change which the Ordinary might make from time to time.”

Maraschi purchased the land, known as Lot 127 on Market Street between Fourth and Fifth Streets. The parcel measured 127 feet by 275 feet and was owned by Thomas O. Larkin, the first American Consul in Monterey, who sold it for $11,500. “The title proving satisfactory, the deed was made out in favor of Father Congiato on May 1, 1855, and the price was put down in cash, the money being borrowed from the French firm of V. Marsion connected with the firm of the same name in Paris and Havre, France.” The bank charged 1.5 percent interest per month on this $11,000 loan, increasing the Jesuits’ debt to $26,000.

The simple structure with “a plain gable roof on four plain walls, neat and decent in every particular” cost $4,000 and was ready for its dedication on July 15, 1855.