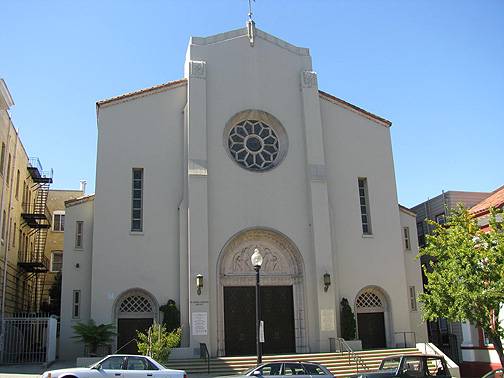 Up the hill is St. Agnes Church, built in 1927. This is a good place to "read" a building. Can you tell something about the social history of this neighborhood by looking at this church? There are several clues. Look at the building itself--not from an architectural perspective, but simply to analyze its parts. It is sturdy but not lavish, something between the luxurious cathedrals of Nob Hill and the storefront missions of the Fillmore. Look at the building in relation to its surroundings. The proportions of the church and the absence of comparable structures in the neighborhood are themselves indicators. It may help if you know that Agnes was a Christian martyr particularly venerated by Irish Catholics. If you put the clues together and conclude that the Haight Ashbury was at one time a sound, working and middle class community of predominantly Irish Catholics, you are right.