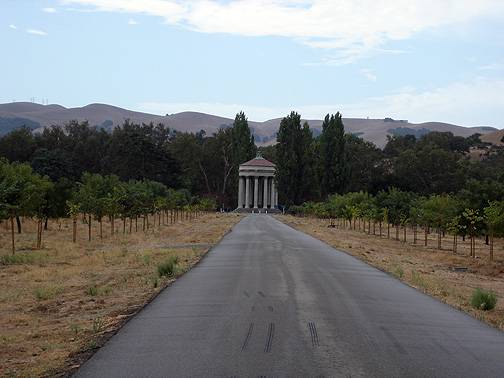 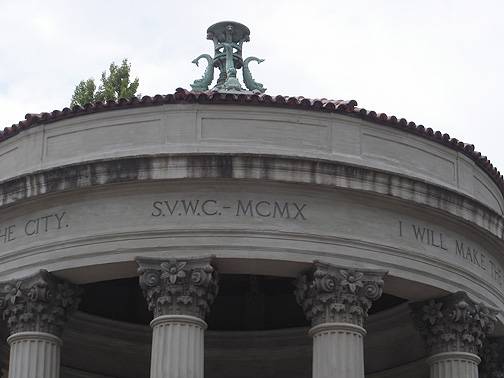 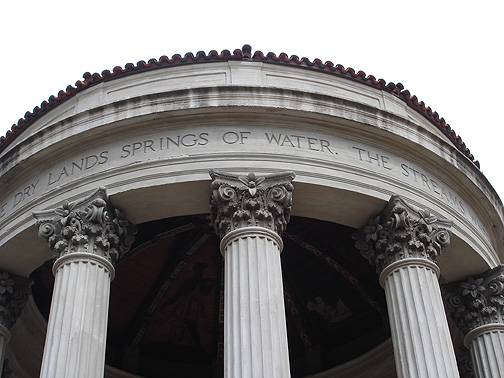 The Spring Valley Water Company was a private company that held a monopoly on water rights in San Francisco from 1860 to 1930. Run by land barons, its 70-year history was fraught with corruption, land speculation, favoritism towards the moneyed elite, and widespread ill will from the general populace.

In 1850 San Francisco was a treeless windswept dunescape, receiving about 22 inches of rain a year, mostly in the winter. The few creeks running through the land could hardly support the instant city rising from the sand. It was clear that water would have to come from outside the city limits, and whoever controlled the water rights and delivery would control the city and its growth, and have unparalleled opportunities for development and great wealth.

George Ensign rose to the top in a competitive field shrouded in secrecy. The California Legislature had passed an act of eminent domain, permitting the taking of privately held land and water rights for the common good of cities. Thus empowered, George Ensign was able to seize rights of way to store and deliver water to San Francisco. In 1860 George Ensign incorporated the Spring Valley Water Works (later changed to Company), soon to become the state’s most powerful monopoly. For decades to come the power of eminent domain gave for the elite owning the water company an opportunity to acquire empires in real estate with land increasing in value as the water flowed in.

The California legislature had redrawn county lines in 1856, limiting SF County to the city limits, and giving the highest mountains, largest streams and expansive space to San Mateo County. Thus George Ensign had to look towards San Mateo for the water, and hired Col. Alexis Waldemar von Schmidt, a German military engineer, for the job. He redirected Pilarcitas Creek through tunnels and flumes, delivering the first water to San Francisco in 1862. Thus began an era of assured growth, land speculation, private fortunes and corruption. 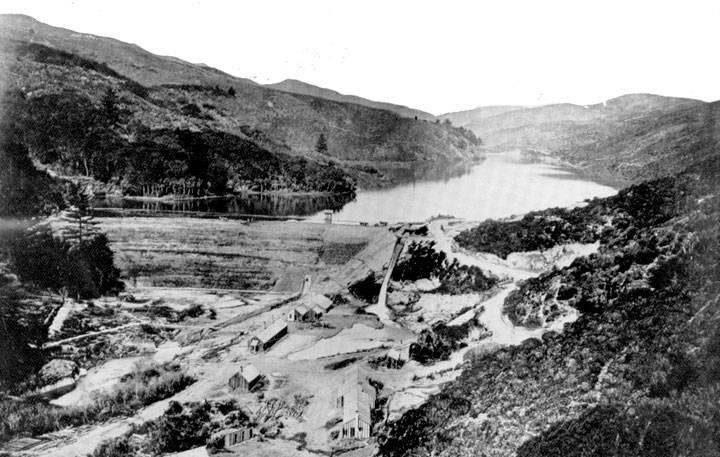 In 1865 Col. von Schmidt tried to break the monopoly of the Spring Valley Water Company by incorporating the Lake Tahoe and San Francisco Water Works Company to build an aqueduct from Lake Tahoe to foothill mines and San Francisco. It backfired, and Spring Valley Water Company acquired the failed company and firmly established its monopoly for the next seven decades.

Meanwhile Hermann Schussler, a Swiss engineer, was hired by Spring Valley to replace von Schmidt. He stayed with the Company for fifty years, while also consulting to leading capitalists and mining companies, an example of how deeply interconnected the water and land barons were.

Armed with the right of eminent domain and backed by San Francisco leading financiers, Schussler drove his conduits, flumes, and tunnel bores deeper into San Mateo County, tapping every major watershed along the Peninsula divide. He acquired 100,000 acres of prime watersheds and rights of way, raised real estate values, and benefited himself handsomely along with the San Francisco plutocracy. 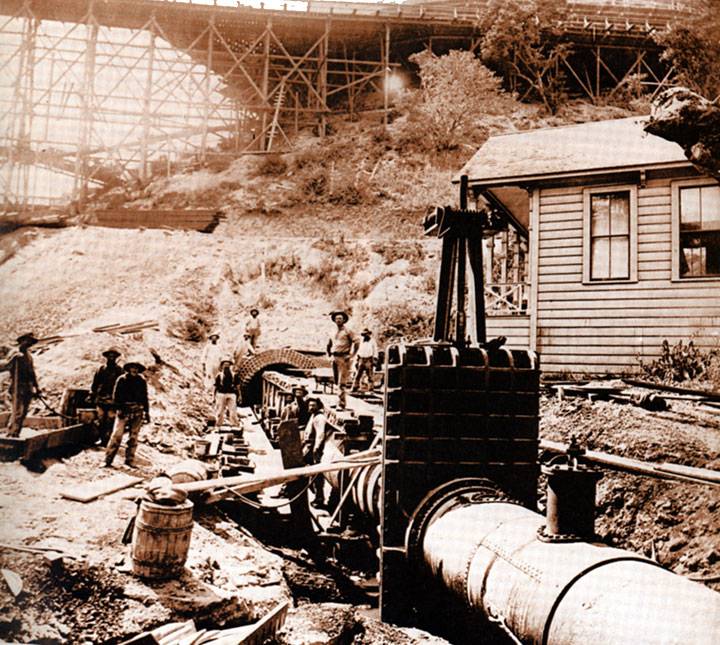 Enter William Ralston. Ralston established the Bank of California in 1864, invited the most respected financiers and influential business magnates to join the board, and soon created one of the most powerful financial institutions in the West. Ralston had grandiose ideas for the Paris of the Pacific, including a “central park” to invite real estate development in the western sand dunes. He hired William Hammond Hall to carry out his vision of a proper green English-style park in the sandy Outside Lands. Under law, the City was obligated to provide the water, thereby destroying a beautiful natural environment outside the City to create an artificial “natural” environment in the Park. Hall was disturbed by the irony but seduced by power and money, and betraying his ideals he designed the 1,000-acre park.

Meanwhile, Schussler was barging ahead, building many large-scale water projects in the 1870s, including dams and hydraulic mines, all turning great profits for Spring Valley while leaving behind an expanse of human, animal and industrial waste. By bribing the City Supervisors, those who were supposed to supervise the Company, they could set their own rules and rates. When they announced they would no longer provide water for the growing needs of Golden Gate Park, the Supervisors attempted a corporate take-over to turn Spring Valley Water Company into a public utility.

As the Supervisors were planning the take-over, Schussler was exploring new sources of water for San Francisco’s continued growth, and decided on Alameda Creek whose watershed covered 700 square miles of tributaries through the Livermore Valley, and incidentally provided water for valuable farmland.

Before either the Supervisors or Schussler could take action on their plans, Ralston bought the Spring Valley Water Company along with the water rights to Alameda Creek.

Ralston’s immense fortunes rose and fell with his and the Bank’s pyramid schemes and wild speculation, and at this point Ralston was deeply in debt. So his plan was to sell certificates of indebtedness for Spring Valley stock at a higher price than they were worth, trade them for stocks to acquire control of Spring Valley, sell Spring Valley to the City, then sell his own interest in Alameda Creek water rights for a large profit. The scheme was stopped by public outcry, and the City Supervisors refused to buy the Spring Valley Water Company.

Then came “Black Friday,” August 26, 1875, when nervous depositors made a run on the Bank of California draining its assets and leaving Ralston $5 million in debt. The board of the Bank demanded that Ralston sign his personal assets over to William Sharon, his devious partner, and that afternoon during his daily swim, he either had a stroke or chose to take his life, leaving Sharon one of the wealthiest men in California. Sharon now owned the Palace Hotel, palatial estates, mills, mines, railroads, timberlands . . . and a controlling interest in the Spring Valley Water Company.

The 1890s saw a rash of development of communities down the Peninsula for the land barons who had made their fortunes in gold, silver, land speculation, railroads, and business ventures, shady and otherwise. Mansions with gardens modeled on British estates and Loire Valley chateaux required prodigious amounts of water, pushing the Spring Valley Water Company to proceed to expand into the Alameda Creek watershed. 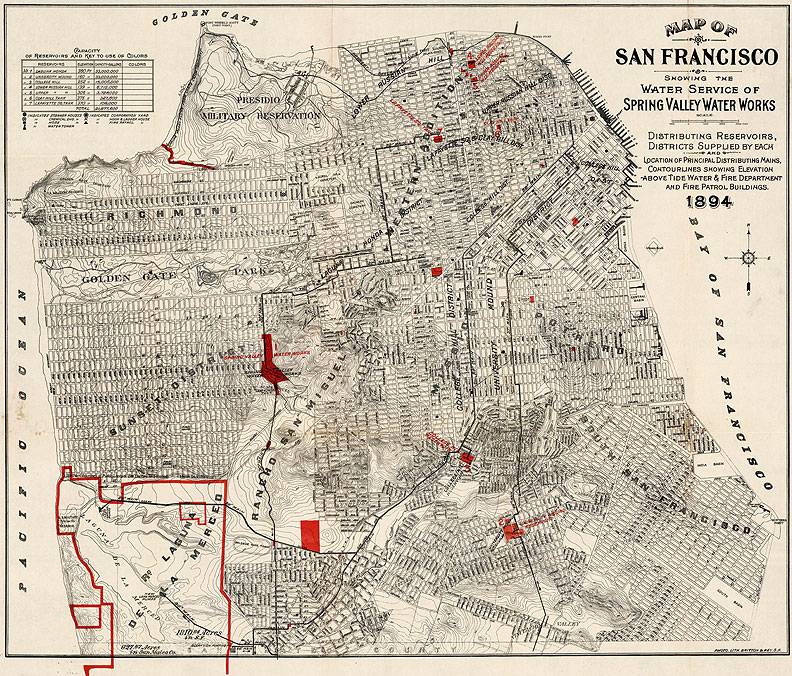 By this time, the Spring Valley Water Company was largely owned and run by the wealthy elite of Hillsborough and nearby estates. Meanwhile there was a growing voice of discontent from San Francisco customers complaining of high rates and poor service, along with the farmers of Alameda County watching their wells and fields go dry.

The demand for water kept growing, this time from James Duval Phelan, an Irish immigrant, who had inherited an $11.5 million fortune along with substantial properties. A Progressive, he was elected Mayor of San Francisco in 1896 on the Reform ticket. His grandiose visions extended beyond the City to include a world-class metropolis. With water requirements far beyond the Water Company’s capabilities, he became fixated on the Tuolumne River and a Hetch Hetchy Valley reservoir (six years after Yosemite had been designated a National Park). To pay for this he advocated for public financing, public control of water systems, and government sponsored engineering projects.

Supporting Phelan’s grand ideas was William Hammond Hall, who upon completion of Golden Gate Park in 1878 had become State Engineer. He realized that the dams and aqueducts essential to the massive development of Phelan’s vision required staggering amounts of capital beyond private capabilities, and that only government treasuries could bear such costs. Further potential support came in 1902 from Congress’ passing the National Reclamation Act, thus creating a civilian army of engineers for large-scale projects. Phelan and Federal Agent Lippincott initiated the idea of claiming Hetch Hetchy as a reservoir within Yosemite National Park.

April 18, 1906, the San Francisco earthquake changed everything. As the city burned to the ground, fire hydrants delivered only a trickle of mud. Many blamed the Spring Valley Water Company for negligence. The disaster gave Phelan’s and Lippincott’s plan the urgency and support they needed. The City was fairly united in believing that they must have a reliable and steady source of water, and Phelan and Lippincott easily convinced them that only the Tuolumne would do that.