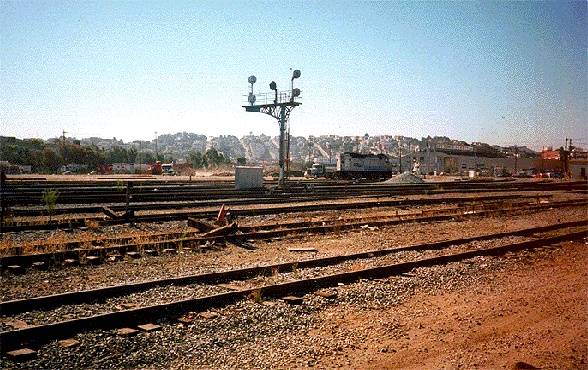 Potrero Hill as seen from Townsend in the middle of the Caltrain railyards that were once under water in Mission Bay.

The Spanish land grant of Potrero Hill was separated from the Bernal Heights Ranch by Bernal Creek and a stone wall built in the approximate area of Army Street. When the Spanish ranches were broken into smaller plots of land, private citizens carried away the stones and used them in their homes or for walls surrounding their property. Many of the old stones can be seen today on Potrero Hill.

The Spaniards, seeing that it was surrounded by water, let their cattle and horses roam about wherever they pleased, having no fear of their getting away. In 1848, when gold was discovered in California, Americans took up large tracks of land, so that few of the first settlers remained on Potrero. Cattle were soon numerous, and so the Spaniards made a special place for them to be slaughtered. This was at Sixteenth Street and Potrero Avenue. At that time, they killed the cattle for their hides. In 1869, the slaughterhouse was removed to South San Francisco. [Ed. note: this refers not to today's city of S.S.F., but the area near 3rd and Evans, southern San Francisco proper.]

The list of names below is from a newspaper article, which appeared about 1865. The article dealt with an attempt to stake claim to land on Potrero Hill. The list is composed of persons who had lived on the hill for ten years or more, and had paid taxes regularly. In this article they went on record as stating that the land was owned by them. The article is in a scrapbook of the Adams' collection: C.W. Owens, H.W. Taylor, J.E. Taylor, W.J. Stone, A.E. Tubbs. S.F. Cordage Co., Charles Adams, Henry Owens, Pacific Glass Works, John Brewster, Benjamin Hill. Many "land sharks," according to an article of an unknown newspaper dated May 31, 1865, attempted to obtain land through fraudulent Spanish grants. This must have caused alarm to the owners of land on the hill. Some of the land in Potrero Nuevo was not claimed, and the city attempted to set up streets and blocks so that the land could be sold.

Other articles in the scrapbook stated that the squatters were repelled and the original residents retained title. This is of particular interest because many of the records of early land owners were destroyed in the 1906 Fire.

In the 1850s squatters set up houses and fencing in lots around Mission Bay, ignoring the claims of the de Haro family to its Mexican land grant known as Potrero Nuevo (several thousand acres between Mission Creek and Mission Bay on the north, down to and including Potrero Point on the south).