South Waterfront Industries of the 1860s 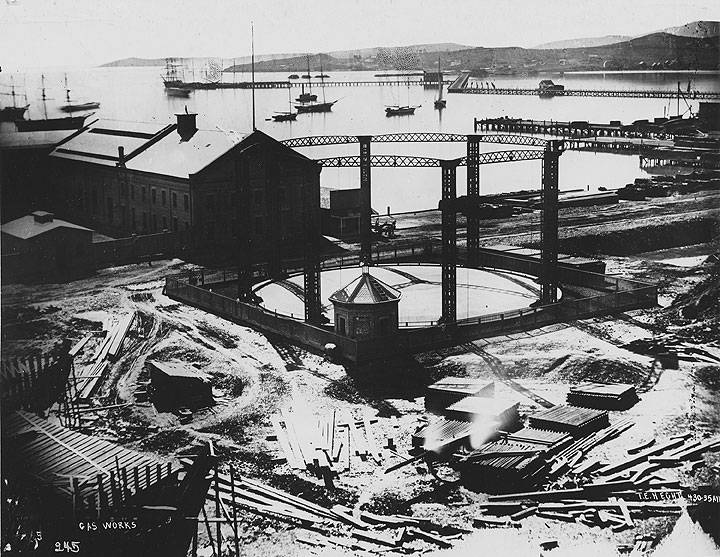 The Citizens’ Gas Works, Spring 1865. Cutting down the 100-foot sandhill on Townsend, between Second and Third streets, produced the fill for this new million-dollar enterprise. The two-story brick building faced the outer edge of Mission Bay so that it was possible for the ships from England, Wales, and Australia to come alongside and dump their coal cargo. King Street runs between the new 115-foot gas holder and the gasworks. To the right, a wharf from Third Street nudges out into Mission Bay. Long Bridge, on its first leg to the Potrero, is only months completed, yet several small buildings have appeared; one is on Hobbs Wharf extension to deeper water where big four-masters could moor. 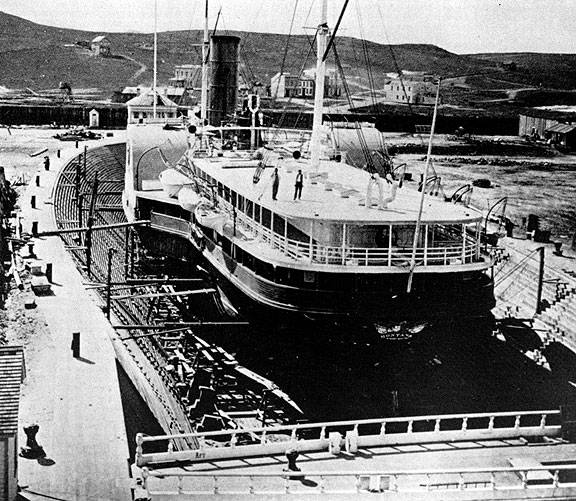 Stone Graving Dock at Hunters Point. The first industrial site at Hunters Point, built in 1868, the dry-dock had impressive dimensions: 465 feet long at the top, 400 feet long at the bottom, 120 feet wide at the top, narrowing to 60 feet wide at the bottom. The pumps threw out 40,000 gallons of water a minute and could empty the dock in 3.5 hours. This view, taken about 1870, shows the Pacific Mail Steamship Company’s coastwise steamer, the sidewheeler Montana, in for repairs. 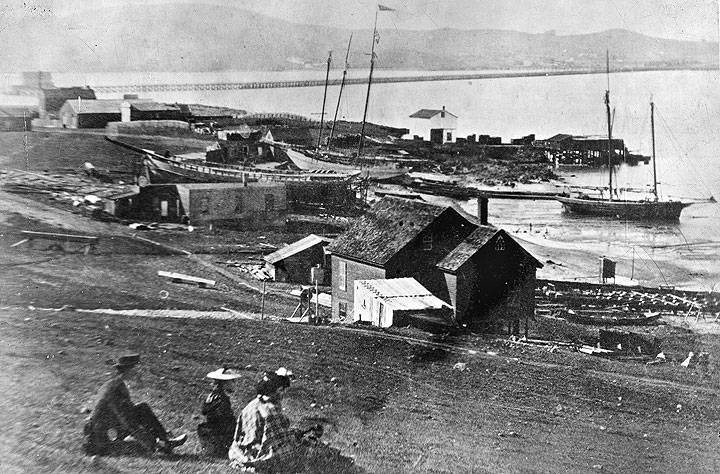 Boatyards at Hunters Point, 1869. Possibly a family outing to consider buying a lot on credit from the Haley-O’Neil Homestead Association at Hunters Point. Their view (near the corner of Keith and Evans Streets) would take in the extension of Long Bridge in the background, boat-building yards and a marine railway, and small farms and workmen’s quarters at the left. This may be the boatyard of William Munder, one of the first boat builders in this area whose specialty was scow schooners like the big one drawn up on the ways. Small boatyards such as this one persisted at Hunters Point right up through the 1970s. Carpenters, shipwrights, and shipjoiners specialized in building wooden boats here—everything from yachts such as those built by W.I. Stone, to wooden tugboats. But these scattered yards were never big employers with the capacity to bring a booming prosperity to Hunters Point. 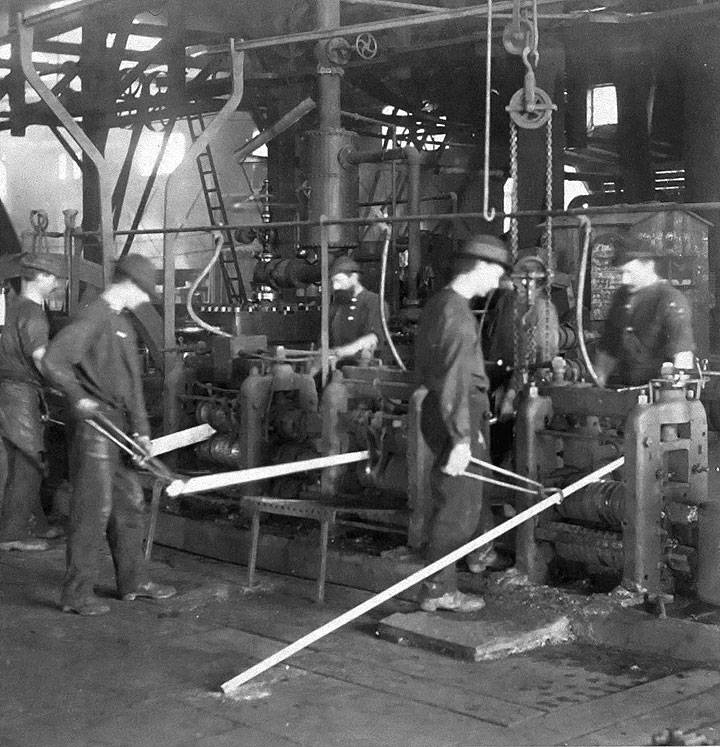 Pacific Rolling Mills. This first great ironworks on the south waterfront rolled its first bar of iron in July 1868. At the time Muybridge took this stereo view in 1869, the mills produced bar iron and had a capacity of 3,000 tons a year. Later they erected puddling furnaces and produced pig iron. From these mills came iron for the railroad; wrought-iron shafts for steamships and mills; I-beams for bridges, girders and housebuilding; rod, bar, and angle iron, chains, bolts and nuts; entire iron bridges; and the iron rails for streetcars and cable cars in San Francisco. By 1880 the mill ran day and night, producing 30,000 tons a year and employing 450 men at wages higher than on the East Coast. Irish immigrants headed for the big mills the moment they arrived in town; skilled iron moulders from Scotland made up a large part of the work crew.

This is chapter nine of "Vanished Waters: A History of San Francisco's Mission Bay" published by the Mission Creek Conservancy, and republished here with their permission.