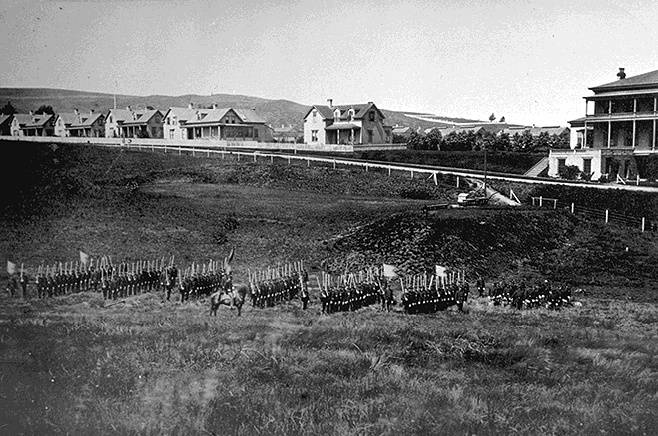 Troops drill in Presidio c. 1900, preparing to go to war in the Philippines.

Immediately surrounded by some of the wealthiest neighborhoods in the nation, the Presidio could depend on its privileged neighbors for volunteer support, but such an approach would fail to fully address one of the root causes of land degradation: social injustice. One can hardly talk about a restored healthy ecosystem when it is surrounded by human habitats plagued by poverty and disease. Embedded in an urban area characterized by widening social divisions and lack of opportunity for the most disadvantaged, the Presidio ought to address social injustice in all its efforts, including restoration.

Some writers have denied that ecological restoration is political, while others suggest that it is inherently democratic. Andrew Light persuasively refuted such arguments in Restoration & Management Notes by noting that "any decision to restore is inherently political against the background of the political governance of nature." He also asked us to judge restorations "not only for their end products but also on the basis of the process by which they are performed." A definition of ecological restoration that accounts for both the product and the process can then be said to have an "inherent democratic potential," but it is not inherently egalitarian. Light did not offer, however, any examples of restoration projects with a democratic component.

Other community-based movements are more explicit in their appeal to the democratic potential of their work. The community gardening movement, for example, has experienced a tremendous boom during the last decade, in part because of its focus on providing both food and jobs for people in disadvantaged communities. The San Francisco League of Urban Gardeners (SLUG) helps maintain the city's 100 community gardens with young workers and supervisors drawn from the city's disenfranchised communities. Its headquarters, infrastructure projects, and large-scale agricultural initiatives are all situated in the very communities where its employees live. For SLUG, the democratic potential is explicit not only in decisions about who is hired, but where and for whom the work is carried out. As Carl Anthony, president of Earth Island Institute and cofounder of its Urban Habitat Program, once wrote, "If we are to restore the cities, we must invest in the future of the people who live there" (Anthony 1990; see also Linn 1990, 1991).

-- Environmental justice demands the right to participate as equal partners at every level of decision-making including needs assessment, planning, implementation, enforcement and evaluation.

-- Environmental justice affirms the need for an urban and rural ecological policy to clean up and rebuild our cities and rural areas in balance with nature, honoring the cultural integrity of all our communities, and providing fair access for all to the full range of resources.

-- Environmental justice calls for the education of present and future generations which emphasizes social and environmental issues, based on our experience and an appreciation of our diverse cultural perspectives.

Community-based restoration will best live up to its democratic potential if these principles are integrated into restoration projects whenever possible. Restored areas that conform to reference ecosystems may be judged a success at some level, but if they are installed and maintained by methods that fail to address underlying social conditions, they may also be judged failures. Ecological restoration should seek to repair land degradation and, at the same time, challenge social and economic forces that lead to land degradation.

Outreach has become the traditional method for addressing political issues in environmental decision-making and implementation, often with little success. Mainstream organizations or government agencies contact members of disenfranchised communities and invite them into structured processes determined by legal or bureaucratic principles. At the second National People of Color Environmental Leadership summit in 1992, one older white activist asked for advice on how to get African Americans to join the fight against an incinerator in his community. He expressed disappointment that despite the obvious threat to the African-American community-- "ashes know no boundaries"--they just wouldn't join his group, no matter how much outreach they did. He received an earful from the thousand or more activists in attendance, several of whom explained that his group should seek to build coalitions with organizations already established in the African-American community and led by members of that community--church groups, civic improvement leagues, etc.--rather than asking them to join his group. It will take more than outreach to ensure equal participation of disenfranchised communities in decision-making. They must feel that they have a stake in the outcome of the decision. It is not enough to be cordially invited to the table if the fare is neither appetizing nor nourishing.