This article originally appeared in The Semaphore #197, Winter 2012 under the title "Saving the Colombo Building: the Untold Story"

Next year marks a century since San Francisco financier Ellie Drexler built the Colombo Bldg. at 1 Columbus Ave. This beaux arts-style, triangular building is considered the Gateway to North Beach and is the demarcation line between the downtown’s high-rises to the south and the human scale, historic neighborhoods of Jackson Square, Chinatown and North Beach to the north. This two-story edifice and the block it sits on have been ground zero for contentious battles and lawsuits dating back to the infamous eviction battle at the International Hotel some 35 years ago. 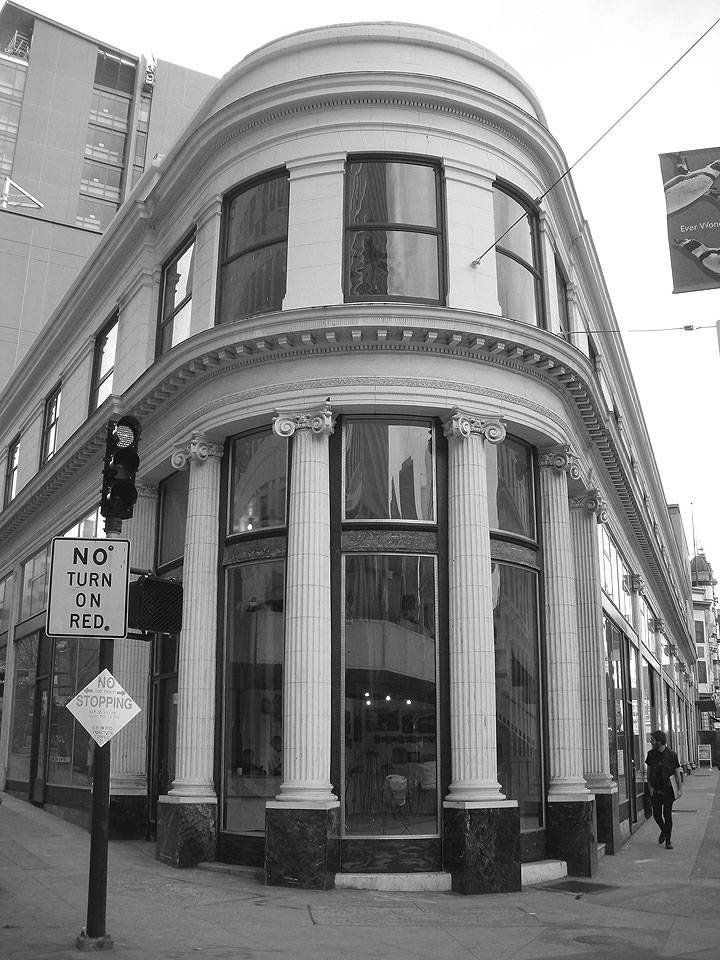 The Colombo Building at 1 Columbus Avenue.

Like the I-Hotel, the wrecking ball has repeatedly threatened the Colombo Bldg. Unlike the I-Hotel, however, it miraculously survived in spite of proposals for its demolition and new high-rise construction on the site approved in the 1980s and 1990s.

Now, on the eve of its 100th birthday, the Colombo Bldg. enjoys permanent protections and has been lovingly restored to its historic splendor as designed by the Reid Bros., the architects who designed the Fairmont Hotel and many other iconic San Francisco buildings. The second floor once again houses numerous offices, while the ground floor is full of thriving, small local businesses that are worth a visit.

The Colombo Bldg. sits on the southeast corner of Assessor’s Block 195, bounded by Washington, Kearny and Jackson streets and Columbus Avenue, kitty corner from the Transamerica Pyramid. The three-story International Hotel, which was the center of San Francisco’s once vibrant Manilatown, occupied the northwest corner of this block at Kearny and Jackson.

In 1968, the I-Hotel was purchased by Milton Meyer and Co., headed by San Francisco businessman Walter Shorenstein, who secured a demolition permit and ordered the evictions of the 196 tenants, mostly elderly Filipinos. They had less than three months to get out. “We deeply regret having to disrupt the lives of these good people,” Shorenstein said as the eviction notices went out. The “Fight to Save the I-Hotel” was on! Five years later, tired of bad press and extensive community opposition, Shorenstein sold the I-Hotel to the Four Seas Investment Corp., owned by Thai liquor magnate Supasit Mahaguna, for $850,000. After several years of lawsuits and community protests, Superior Court Judge Ira Brown ordered the evictions. In the early hours of Aug. 4, 1977, some 300 San Francisco sheriff’s deputies and police officers on horseback arrived to storm the 3,000 person-strong group of community activists that had assembled to stop the evictions.

The last of the elderly tenants were dragged from the building in the pre-dawn hours of that shameful day in San Francisco’s history. A few years later, the historic I-Hotel was demolished and the site sat vacant for the next quarter of a century. (Ironically, a 105-unit, low-income senior housing complex occupies the site today.)

Once again, community activists banded together to protect the neighborhood, ultimately challenging City College in court. As the 20th century was coming to a close, the San Francisco Examiner reported on June 7, 1999 the good news that, “Pressured by preservationists, a lawsuit and City Hall, City College of San Francisco officials have backed off plans to demolish the historic Colombo Bldg., …”

The settlement of the lawsuit between Friends of the Colombo Bldg. and City College required that the Colombo Bldg. be preserved, restored and rehabilitated. Now, more than a decade later, the work is complete just as the building celebrates its 100-year birthday. On Aug. 23, 2002, the Board of Supervisors designated it as San Francisco Landmark No. 237. It was also listed on the National Register of Historic Places. San Francisco Architectural Heritage, a nonprofit preservation organization, now holds a Historic Preservation Easement for the Colombo Bldg., to preserve in perpetuity its architectural, historic and cultural values. City College sold the building to one of its former tenants, Luigi Barassi, who has painstaking restored the building inside and out.

The story ended well for City College, too, which purchased the parking lot on Kearny and Washington where the new Chinatown/North Beach campus will open next year. I hope we’ll all celebrate the Colombo Bldg.’s centennial.