The first newspaper published by Americans in California was the Californian, printed in Monterey in 1846 announcing the Mexican American war, written half in English and half Spanish. The press was moved to San Francisco and printing started up again on May 22, 1847 in competition with the weekly California Star published by Mormon pioneer Sam Brannan, beginning that January. Both efforts suspended publication in the face of the California Gold Rush. By August, the Californian had resumed publication, but by November 1848, both papers were bought and merged then renamed the Alta California. The press that once printed the Californian was moved to the Sacramento area to be used on the Placer Times. The press was again moved and began publishing the Motherlode's first paper, the Sonora Herald, the taken to Columbia to print the Columbia Star. Within a few years of gold discovery, mother lode towns all had multiple competing journals.

James King of William began publishing the Daily Evening Bulletin in San Francisco in October, 1855 and built it into the highest circulation paper of its time. He criticized a city supervisor named James P. Casey, who on the afternoon of the story about him ran in the paper, shot and mortally wounded King. Casey was lynched by the early vigilante committee. The Morning Call was established and began publishing in December 1856, and later merged with the Bulletin to become the long running Call-Bulletin. 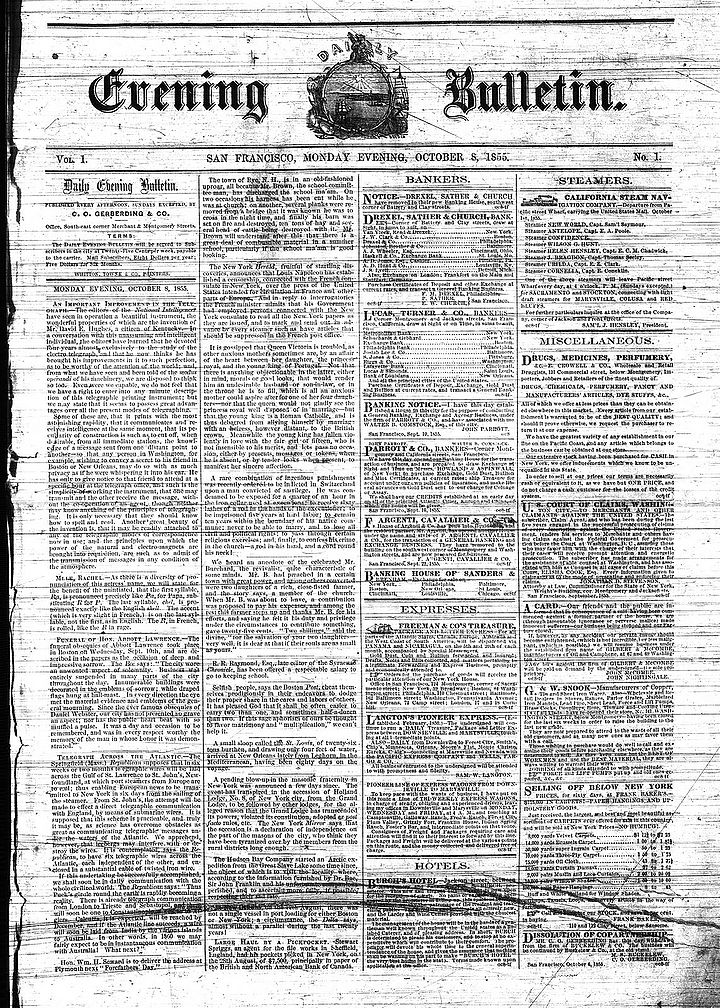 The Sacramento Bee hit the streets in February, 1857 under the editorship of James McClatchy who began agitating on behalf of farmers against destructive practices of cattle ranching and hydraulic mining interests.

The San Francisco Chronicle debuted in June, 1865 as the Dramatic Chronicle, founded by Charles and M.H. de Young aged 19 and 17. In 1887, young William Randolph Hearst took over his father's Daily Examiner which became the flagship of his national chain.

Fremont Older became editor of the San Francisco Bulletin in 1895 and took up the struggle against the powerful Southern Pacific Railroad and along with a fellow Californian Lincoln Steffens, became a well known muckraker and the first objective observer to accuse District Attorney Charles Fickert for the framing of labor radical Thomas Mooney.

Other cities have had their own long surviving papers, including the Fresno Republican, the Bee, and the Oakland Tribune.

On October 1, 1910, a bomb exploded at the L.A. Times building, killing 21 workers. Labor activists were blamed for the bombing, but the San Francisco Daily News, a four-penny paper started in 1903, defended them. The Daily News joined the Scripps-Howard in 1921. The People's World began publishing in 1938, the first leftist daily published in the West.

The oldest African-American newspaper, still active in the 1930s, was the California Eagle. It appeared first in Los Angeles in 1879. The first French journals, the Californien and the Gazette Republicane both began in 1850, and were followed by the Courrier du Pacifique in 1852. Both the first German and first Italian papers, the California Demokrat (1852) and the Voce del Popolo (1859) were founded in San Francisco and had long runs. Chinese in California have published many newspapers, the first was the Gold Hills News in 1854.