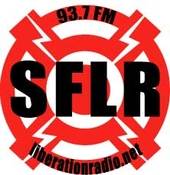 To give a voice to the voiceless; to the poor and to people who speak out against the brutality of capitalism, San Francisco Liberation Radio (SFLR) broadcast its first show in May, 1993, from the rooftop of an apartment building on Clement Street. Inspired and assisted by Stephen Dunifer, who had recently put Free Radio Berkeley on the air, Food Not Bombs activists Richard Edmondson and Jo Swanson decided to start their own micro (called "pirate" by the real pirates) radio station in San Francisco.

The first SFLR broadcast occurred on May 1st, 1993. Over the summer, SFLR did weekly mobile broadcasts, mostly from Twin Peaks or nearby. The station went into overdrive on the night that then-mayor Frank Jordan's Matrix Plan went into effect in August, 1993. Jo recorded the events at the downtown bus depot when riot police evicted all of its homeless occupants. The tape was played from a battery-operated transmitter from the top of Mt. Davidson a few hours later. Matrix created a state of emergency for homeless people, SFLR responded by doubling its broadcast hours.

Twice-weekly mobile broadcasts followed for a few weeks until, on Sept. 22nd, 1993, Richard was tracked down by an FCC agent who demanded to see ID. Richard refused and drove away, whereupon the FCC agent called the SFPD to help him. The San Francisco police, being as enthusiastic as they often are, sent 8 squad cars and about 20 officers to conduct a dramatic arrest on Webster Street. At that point Richard did show the agent his ID and was allowed to drive away again by the officers, who had not been told why they were supposed to stop him and, frankly, seemed a little annoyed by the FCC agent.

The arrest made the papers and also inspired SFLR to try a new strategy; go public all the way. Thanks to the help and advice of Luke Hiken and a group of lawyers, the National Lawyer's Guild's Committee on Democratic Communications, Richard and Jo faced the inevitable large fine, $10,000, with legal assistance. Figuring that the FCC now knew where they were, they began broadcasting nightly out of their own living room. This allowed SFLR to be on the air seven nights a week rather than two.

With a somewhat stable base, SFLR was able to get more people in on the programming. Weekly talk shows began on Tuesdays, with Kiilu Nyasha, former Black Panther Party member and ex-programmer for KPFA, hosting "Freedom is a Constant Struggle" and Keith McHenry from Food Not Bombs with "Voices of Rebellion". SFLR's schedule included news (from alternative and mainstream sources), music, children's stories, taped lectures (from speakers such as Noam Chomsky, Helen Caldicott, Ramona Africa and Geronimo Ji Jaga), readings from left-wing publications and announcements of progressive events. Talk shows were added on Mondays, with "Unheard Cries" hosted by Jackie Dove (who also designed the station's website), "At Large in San Francisco" with roving reporter Norris Large, "Radical Departures" with Herb Mintz, and "Juggler Vain's House of Dung", hosted by and George Perry.

In an article in the Examiner on January 15th, 1995, right-wing talk show host Michael Savage of KSFO said that we at SFLR "suffered from a street artist mentality." He was right. Several programmers from the station had a background in graffiti, puppetry, poster design and distribution. All these arts were used to promote the station and gain listeners. Members of SFLR had been known to stand by the side of 19th Ave. with large puppets and signs that read "Tired of puppet radio? Try 93.7 fm". The frequency appeared in large letters painted on the wall at Ocean beach and posters of fundraisers were distributed throughout the surrounding neighborhoods. With improved technology, thanks to Stephen Dunifer, the signal was clear and strong (about 35 watts) all the way along the shore to Pacifica.

Legally the FCC was being held at bay as their case against Free Radio Berkeley was being heard in Oakland. They were attempting to get the federal court to grant an injunction forcing FRB off the air. On January 20th, 1995, April 14th, 1996 and yet again on November 12th, 1997, Federal Judge Claudia Wilkin declined the FCC's petition against FRB.

This was the first time the FCC had lost a court action against an unlicensed broadcaster. The ruling was a terrific boost for micro radio. Stations popped up all over North America. In the spring of 1995, Keith McHenry took a 5 watt transmitter with him on a speaking tour on the country. He reported that everyone who attended his talks was thrilled with the experience of broadcasting. "They ran outside and sat in their cars and turned on the radio", he said, "and then they came back in, really excited." SFLR joined the newly established Radio4all group on the internet, where they now exchange broadcast-quality programs with other micro stations around the world. Richard produced the monthly "Food Not Bombs Radio Network" program which was sent out to legal stations across the country and even aired around the world via shortwave from Radio for Peace International. SFLR received mail from listeners in Alaska, Tokyo and Geneva. Geneva even provided a programmer; Alex, who sent frequent tapes of Italian hip hop music and his own commentary on global news.

International support or no, nothing was guaranteed in the way of safety for micro radio. Local DAs and law enforcement often took it upon themselves to interpret the constitution and busted many a station, sometimes with SWAT teams. Mostly because of the nature of San Francisco, with its large community of progressive people, local micro broadcasters were spared much of the harassment that similar stations across the country were subject to (especially those run by African Americans). In Decatur, IL, Napoleon Williams and Mildred Jones of Black Liberation Radio had their street closed, electricity shut off, door broken in by a gang of heavily armed police, children taken away along with "everything with a plug on it", all to save their community from its own radio station. Eventually Mildred was jailed for breaking parole by not going to a college class on a day that there was no class. The reason she was on parole? A local K-Mart claimed that she had stolen a purse which actually was her own purse, but they ignored its contents and somehow lost the videotape that proved her innocence. She is now serving 3 years in jail. No depth was too low for the defenders of corporate freedom in their fight against micro radio. In Tampa the "Party Pirate" Doug Brewer and his wife were held at gunpoint in handcuffs for hours as their home was raided and the station's antenna was literally ripped from their home, leaving gaping holes in the roof. Broadcasters are being fined now for millions of dollars and threatened with time in jail.

Here in San Francisco, SFLR had plenty to report on. In 1996 Matrix II, another attack against poor people, began with the booting of homeless people out of Golden Gate Park. An army of officers, on motorcycles and horses, invaded and evicted homeless people while garbage trucks devoured their paltry possessions. Interviews of the displaced homeless and the activists who were beaten and jailed on their behalf were broadcast as fast as they were produced. In June 1995, a gang of police officers from the Richmond district station, led by Officer Mark Andaya, beat and pepper-sprayed Aaron Williams to death in front of his family and neighbors. SFLR covered the following police commission meetings as angry family and friends of Aaron denounced his brutal murder at the hands of the SFPD and demanded the firing of Officer Andaya... which eventually happened. Every night from 4-10 (longer on weekends) SFLR covered Police Commission meetings, Critical Mass bike rides, Haight-Ashbury Neighborhood Council meetings, Food Not Bombs servings/arrests, demonstrations against U.S. attacks on Iraq and a wide array of other community events.

The Federal Court ruling has apparently angered the National Association of Broadcasters (NAB). They had instructed the FCC to crack down on micro radio at the NAB convention in April. At that conference KFOG engineer Bill Ruck reported on FRB and SFLR. Bill had even gone so far as to photograph the front of Richard and Jo's apartment building and show it to the conventioneers. Since then, with subtle and not-so-subtle intimidation, over 150 stations in the U.S. have been forced off the air, including Radio-X, a 15 watt station in the Mission District. They don't stay quiet for long though, many silenced stations get back on the air as soon as possible, often with more community support than before.

Currently the FCC and the NAB are debating whether to legalize low-power radio or run all unlicensed broadcasters into silence and possibly prison. At this year's conference they actually invited Luke Hiken to speak on micro radio's behalf. But don't get too excited, they also inducted Rush Limbaugh, master of misinformation, into their hall of fame while applauding heavy handed tactics used to shut down unlicensed stations across the country. Due to the outpouring of support for micro radio from the people, the NAB knows it will be an uphill struggle, even with all the power and money they possess. Truth is a greater weapon; the transmitter is mightier than the sword.

On June 16th, 1998, Judge Wilken granted the FCC their injunction. Avoiding the constitutional issues, she decided that FRB had never applied for a license and therefore had to follow the formal procedure, regardless of time and expense. This ruling forced FRB, SFLR and many other stations off the air TEMPORARILY. At the time of this writing, in 1998, micro radio enthusiasts are organizing further actions to free the airwaves from the corporate stranglehold they are held in. If you would like to learn more about micro radio and link to many stations, look up the SFLR website.