When, in the 1970s, the former Mabel Janet Busby was introduced to the Dean of Women from Boston University she brightened. “Pleased to meetcha dearie. I was once in that business myself. ” 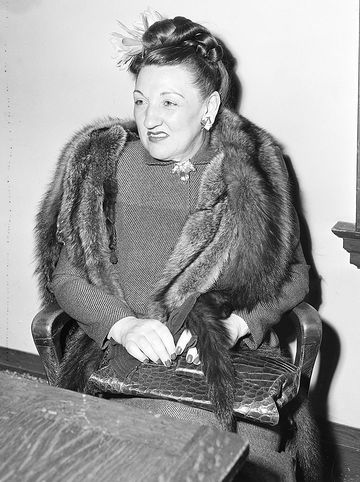 Indeed she was. The speaker was Sally Stanford, San Francisco’s celebrity madam, then retired to a life of a Sausalito restaurateur. She could make this claim because she had for years assumed housemother duties for classy young women pursuing the world’s oldest profession some of whom had emerged from hard scrapple backgrounds to rival Stanford’s. Born in 1903 in Baker Oregon, a backwater town which would prove too small to contain her outside ambition,her route to the bright lights was no straight arrow path. Dropping out of school in the third grade, in her teens she married a shady character named Dan Gooden, a bad decision that led to jail time on a bad check charges. However, as with many of the incarcerated, she learned some tricks that led her to embark on a profitable career on the wrong side of the law, in her case as a bootlegger and speakeasy proprietor.

Then in 1924, with another husband in tow (there we 8 in all), she surfaced in San Francisco, a city with a demimonde so well established it was possible for one madam to marry a millionaire and another to cozy up to the city’s cops so enthusiastically she was named grand marshal of the Policeman’s Ball. For a while Stanford played the housefrau, using her downtime to catch up on the literary classics she had missed out on in school. (Shakespeare and Omar Khayyam were her favorites. ) But given her restless nature and with money in the bank, she was before long back in not so legitimate business. It was a time when law and order was not the City’s priority. “If everyone was stealing at least they were doing it with class,” she said. Her first San Francisco venture was a “hotel” at 643 O Farrell Street that seemed to draw exclusively on a male clientele. About this time Mabel Busby decided a name makeover was in order. (One historian of such matters calculated that over half a century she took on 28 different names. ) A chance encounter at Marquand’s bar with the old chestnut tune “I Wonder What Became of Sally” inspired her new first name. Then, listening to the Cal-Stanford football game on the radio, she decided to roll the dice and make the name of the winner hers. Stanford won. “Sally California” would have had a whole different cache. In addition to name changes Stanford had a penchant for changing the address of her “temple of love” as she called it. After 634 O’Farrell there was 676 Geary, then 750 Taylor and on and on. Her peripatetic moves were generated by an ambition to trade up, but also to stay one step of the police, some of whom could not be bought.

But after several encounters with the law, Stanford decided she wanted to stop running. She acquired what she called her “fortress” at 1144 Pine, a grand, secluded, and elegant residence in an upscale neighborhood where she said “the neighbors had more to do than peek through the drapes. “It’s here that she established the Sally Stanford brand characterized first and foremost by the women she hired: show girls, models, Hollywood transplants, and a few disgruntled divorcees. Life magazine was impressed, labeling Stanford’s ladies “specially selected hostesses. ” The women often accompanied Stanford to cultural shindigs, stopping traffic at venues like the opera house.

Sheiks, princes and movie stars found their way to Pine Street for paid-in-full intimacy (Stanford described herself as a merchant of cash and carry love). Discretion was her watchword. But there were exceptions. Word leaked out that Errol Flynn had encamped for a week, sampling the charms of every woman on the staff. And Stanford herself outed the pre-Lauren Bacall Humphry Bogart for his behavior as a badgering drunk, belittling and insulting the girls. This Who’s Who parade of libidinous males reached a pinnacle in1945. That was because delegates of 50 nations were in the city for the founding conference of the United Nations. It was said that the UN came into being during negotiating sessions at Sally Stanford’s. Stanford was bemused by this influx of “international lechers. ” “If I‘d been arrested I could have declared diplomatic immunity,” she said.

She was in fact arrested—17 times—but was convicted only twice. Even though Stanford hob-knobbed with the San Francisco elite—Mayor Sunny Jim Rolph was a good friend—there was an element of the law enforcement community who could not let bad enough alone. A particular vice cop, one Dick Dyer, was her Officer Krumpsky. “I played the White Whale to his Captain Ahab,” she said. A frustrated Dyer was foiled time and time again, his disguises easily recognized, his attempts at dissembling voices on the telephone fooling no one. On one occasion when Dyer was crawling around on Stanford’s roof she spotted him through the skylight and called the cops. “There’s a prowler on the premises,” she said. The men in blue responded promptly, arresting the miscreant for trespassing.

In general, though, she retained the passive support of the powers-that-be, who breathed a collective sigh of relief when, after one of her arrests, her appointment book was not entered into evidence. After a while, however, she began to tire of the business. She said she had no use for the postwar Bible Belt Migration—people who “wore their halos way too tight. ” As a mean-spirited morality began to rear its head, Stanford decided it was time to get out. “If you’re being run out of town, get in front of the crowd and make it look like a parade,” she said. She moved to Sausalito, opened the Valhalla restaurant, served as the city’s mayor, contributed heavily to Guide Dogs for the Blind, and other charities and died in 1982 with 20 million dollars in the bank.