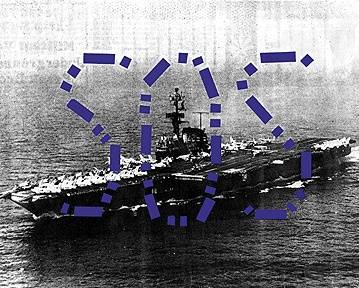 With three sailors in the brig and 12 others hastily transferred from the ship the USS Coral Sea sailed out the Golden Gate Tuesday for its final sea trials before returning to Vietnam.

Captain William Harris, the attack aircraft Carrier's commander, locked up the three and kicked the 12 off his ship in hopes of squashing a growing anti-war protest among his ship's crew.

The Coral Sea will return to the Alameda Naval Air Station before sailing for Southeast Asian waters on Nov. 12. Over 1000 men out of the 4,500-man crew have signed a petition asking congress, to keep the Pentagon from sending the ship back to Vietnam. Organizers of the petition drive, called "Stop Our Ship", expect to gather even more signatures during the eight-day shakedown cruise.

Already 30 crewmembers have said they won't sail if the ship sails to the war zone as ordered. Some of the men are confident they will be able to Stop the ship even if congress won't.

"The Coral Sea will not go back," said Larry Harris, a crewman from Philadelphia "If the petition doesn't work we have other means." He didn't elaborate.

Civilian supporters and anti-war sailors from the ship held a vigil outside the East Gate at the naval base Monday noon, through Tuesday morning before the ship sailed.

The vigil was unlike previous anti-war demonstrations in that at least half of those who participated were active duty servicemen. In 1965, during the "stop the trains" movement when protesters attempted to stop troop trains going to the Oakland Army Terminal, most GIs supported the war and wanted to fight in it. They refused to accept anti-war material. During the vigil however many sailors asked for copies of the petition and gave the clenched fist salute or flashed the "V peace sign.

One crewcut officer, dressed in civilian clothes, came along and frenetically tore up some banners and picket signs, but he was the exception. Most officers and lifers just pretended not to see the demonstrators.

The SOS movement is strictly a serviceman's trip. In fact they have had trouble drumming up support among civilians. When the Coral Sea came into port two weeks ago, over 40 men spelled out "SOS" on the flight deck as it sailed under the Golden Gate Bridge. They had hoped some civilians would be on the bridge demonstrating support for their movement. But the ship was an hour late in arriving and the few civilians on the bridge had left by the time the Coral Sea entered the Golden Gate.

The sailors also hoped that some supporters would be at the pier. But the Navy brass was so uptight that they refused to issue visitor's passes to anyone. They also had military police at the pier with firehoses and erected wire barriers to keep out any civilians who managed to slip through the security net. Tight security was maintained all the time the Coral Sea was in port.

The SOS movement is not confined to the Coral Sea. Sailors aboard the USS Ranger and USS Hancock, both of which are now at the Hunters Point shipyard being refitted, have also started organizing. Those two aircraft carriers are due to return to southeast Asia after the first of the year.

A low level guerrilla attack broke out on the Hancock. There were two fliers on board the ship when it sailed here from San Diego, one causing considerable damage although the Navy is keeping mum about it. Someone aboard the ship is also taking pot-shots at lifers with what is apparently an air pellet gun.

Civilians may not appreciate how difficult it is for servicemen to do simple things, such as circulate a petition. When petitions were first circulated on the Coral Sea, three men who were caught were thrown in the brig. Twelve other sailors then publicly started passing it around. They were hauled before the captain, and petitions with 300 signatures were seized. The men then went and collected 1000 signatures.

Thus far the SOS movement has been primarily a white one. "The black brothers on the Coral Sea are very tight," said Ed Smith, another crewmember. "But they're wary of it because we're white, although some blacks have signed the petition."

Before sailing Tuesday one of the organizers said, "this time out we really have to work—-we got eight days to do it." The importance of civilian support was also stressed. "A lot of people on the ship are afraid to do anything because they feel nobody will hear about it or care if they get thrown into the brig," said Smith.

Meanwhile aboard the USS Constellation now en route to the war zone, nine anti-war sailors are in the brig. The nine had sought sanctuary at a church when the ship sailed from San Diego on Oct. 1. Military police entered the church and arrested them. They were flown to the Constellation aboard a helicopter.

The men were convicted at a Captain's Mast last Saturday for missing the ship's departure, being absent without authorization and shirking important service. A Navy spokesman said men were sentenced to 30 days' correctional custody, which allows them to leave the brig for work during the day. But the men have refused to work. In addition to the 30 days the men were sentenced to forfeiture of half pay for two months and to reduction in rank to the next lower pay grade.

David Harris, the anti-war leader and one of the organizers of the civilian support for the sailors on the Constellation, said he considered the San Diego campaign a success even though the carrier sailed for Vietnam. He said over 50,000 civilians signed a petition in San Diego asking that the ship not be returned to the war zone. "This in a city were 30% of the people work for the Navy," he said.

"But the Constellation sailed," Harris was reminded when he made an appearance at the Coral Sea vigil.

"There are only two ways to stop a ship that I know of," answered Harris. "One way is to get the orders changed in Washington. The other is for the sailors to refuse to sail it."

"There's another way," said someone in the crowd which had gathered around him. "It could be sunk."

Harris agreed that this may be possible, but said he didn't agree with such tactics.

As Nixon is withdrawing ground forces from Vietnam, the bombing of Laos, Cambodia and Vietnam has been increased. Against countries with weak air forces the aircraft carriers in the Tonkin Gulf are secure bases from which to launch the bombing raids.

Thus the SOS movements aboard these ships is as important a movement as the one among the ground troops who are refusing to fight.

Civilians who want to support the sailors on the Coral Sea should contact SOS, 1232 Market St, Room 104, San Francisco.

There was another march for peace on Saturday. About 20,000 made the trek from the Embarcadero to the Polo Field in Golden Gate Park. I drove this time instead of marching. I viewed the whole affair with mixed emotion.

The largest nuclear explosion ever touched off by the USS Amchitka took place midway through the demonstration, as if to mock the peace movements efforts.

But the march was lead by sailors the USS Coral Sea who are trying to stop their ship from returning to the Southeast Asia war theater. Some of the men had watched last April's peace march when 200,000 marched and the whole thing had turned around their heads. This time they were leading the march and trying to stop their ship from leaving for Vietnam. So I went to the demonstration to distribute leaflets about the Coral Sea to spread the word about what these sailors were trying to do.

Nine of the sailors got up on the speakers' stand and announced that they will not be aboard the Coral Sea when it is scheduled to sail Nov. 12. "We should take those 600,000 pounds of bombs and shove them up Nixon's ass," said one. Everyone, liberal, radical, and revolutionary cheered.

Their actions and words contrasted starkly with most of the other speakers, One official of the International Longshoremen and Warehousemen Union got up to say how much he and his union were for peace.

"Liar, liar," shouted members of the crowd who reminded him that members of his union are loading war materials for that ugly war daily. "Stop loading bombs" the crowd shouted up at him. The hecklers made him angry.

Former New York Congressman Allard Lowenstein, who has made a career out of his ballot box opposition to the war, also spoke. He was one of the originators of the "Dump Johnson" campaign in 1968 and is now organizing the "Dump Nixon" campaign. He said the way to end the war is to vote against Nixon.

He got the same response as the ILWU official got. "Bomb the ballot box," shouted one group. "Vote Communist," chanted those radicals who are a little to the left of the Democratic Party.

The most theatrical moment of the day was at 2 pm, the time of the Amchitka explosion. There was a moment of silence leading up to the big moment. Then at 2 pm, a siren on stage signaled the nuclear blast. A flock of doves were released. The doves were pretty confused and some of them flew off the stage and landed in the crowd. Some in the crowd shouted "We've been silent long enough; bomb Nixon."

Pierre Villaincourt, the sculptor who created the fountain in Embarcadero Plaza said he wanted to take one of the doves and tear it apart as a protest to the limp-wristed nature of Saturday's protest. He restrained himself, however.

Most of those who marched were not aware of these arguments. They marched because they were opposed to the war, to Nixon. The majority were young freaks who are turned on by the festive air of the march. Viet Cong flags were plentiful. Such rock groups as Clover and the Elvin Bishop Band performed.

At the edge of the crowd members of Revolutionary Union sold Red Books, Jesus Freaks offered free kool-aid and cookies if you listened to their spiel, McGovern supporters sold bumper stickers, and the Trots sold literature. The Beast, an East Bay theatrical group put on a skit knocking the liberal nature of the march.

The demonstration was liberal. Peace is something that even Mayor Alioto can endorse. He issued a statement deploring the war not only for the loss of life and resources bit for the "dispiriting effect on the American people who live in our big cities."

Despite this, the marches have become progressively radical. One group carried a big banner which said "Support A Communist Victory in Southeast Asia." That sign would not have been permitted at the first Vietnam Day march held in Berkeley in 1965, when 14,000 marched to the Oakland line. The people are becoming more radical even if the organizers aren't.