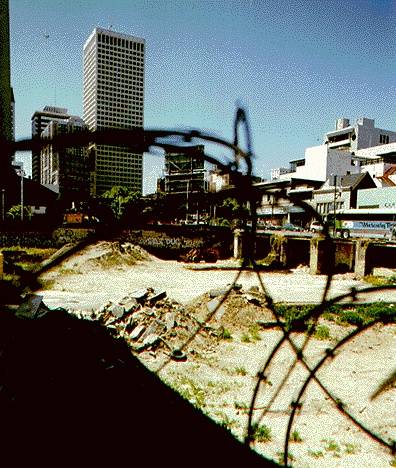 The rebuilding of the I-Hotel lot has been a very slow process. photo: James Sobredo

"The brutal eviction of the elderly tenants of the International Hotel in 1977 highlighted the need for low-income housing, as well as the inability of our institutions to meet that need. Now, 23 years later, the few remaining tenants are still waiting to go back to the International Hotel, to the place they call home."

--from the community newsletter Paunawa, August 1995

In 1996, the building of the proposed federally funded senior housing on the International Hotel site reached a major snag. Prior to this, progress had been made by the developer, the Chinese Community Housing Corporation, Inc. (CCHC), which had formed an architectural prime team assigned to design the building. The two lots, owned by PanMagna, the former Four Seas Corporation which evicted the tenants, are located at Kearny and Jackson Streets where the International Hotel and Victory Building once existed.

The immediate problem confronting the CCHC was that St. Mary's in Chinatown and the San Francisco Archdiocese were backing away from the original agreement to sell a portion of the site for the International Hotel to Kearny Street Housing Corporation. In 1995, the owners, PanMagna, expressed interest in selling the property to St. Mary's Church. St. Mary's school was unsafe under a new seismic ordinance. The church wanted to build a new school, chapel and gymnasium on the International Hotel site. Kearny Street Housing Corporation, the main group that was established as a Mayor's committee to oversee development of the International Hotel site, met with St. Mary's which was willing to partner the use of the land for housing and school.

The agreement reached by both parties was made before applying for the HUD federal funds. A plan that combined school and housing had much greater chances of acceptance by HUD officials. 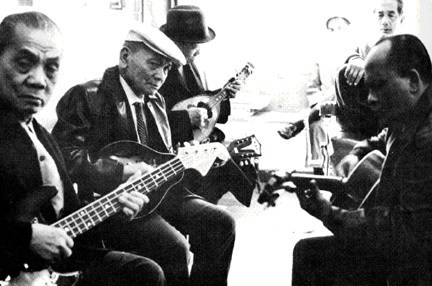 In September, 1994, HUD granted the CCHC $7.6 million to build senior housing on the site. With the expectation of federal funds and the support of San Francisco's Mayor Frank Jordan, St. Mary's own major stumbling block was selling their unreinforced school property so they could proceed with the purchase. Unfortunately, few takers in the market were willing to match the selling price.

No sale could happen unless St. Mary's and the San Francisco Archdiocese were involved. St. Mary's shifted their position from jointly owning the International Hotel site to leasing the land to the Kearny Street Housing Corporation. This posed a major problem since the HUD deal was predicated on CCHC purchasing the property.

One of the main dilemmas facing the CCHC and community as a whole was time. The HUD grant expired in March 1996 and could only have been extended until September 1997 (1 1/2 years). The money was allocated in 1995 with the intent that the building would be finished in two years. Delays threatened to postpone completion of the project for three or four years. Not reaching a settlement between CCHC and St. Mary's/SF Archdiocese further delayed and endangered the project. Furthermore, St. Mary's couldn't begin to negotiate without a buyer for their existing school.