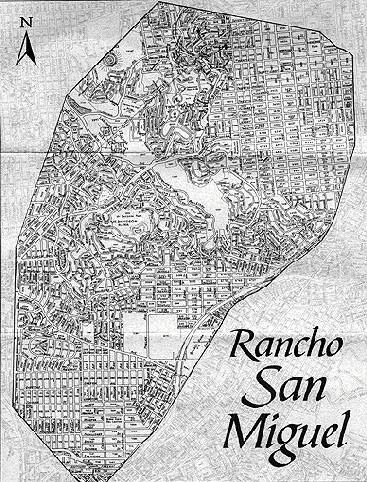 San Francisco has forgotten there ever were ranchos within its boundaries. Like all other parts of California in the nineteenth century, San Francisco also had ranchos. Stocked with cattle, sheep, pigs, and horses etc., ranches were run by ranch hands, vaqueros, Native Americans, rancheros and their families. During the Mexican California era, from 1823-1848, many ranches were established by grants from the Mexico-California government. Other ranches had existed before in the time of Spanish California. The great rush for gold in Northern California suddenly and surely eclipsed the Rancho Period in San Francisco. Eventually, as the ranchos disappeared, their history in San Francisco also vanished. Narratives of early San Francisco, then called Yerba Buena, are scarce. Even rarer are recollections of the ranchos that existed here for many years before the search for gold dust replaced ranch living in San Francisco.

Rancho San Miguel, owned by Jose de Jesus Noe from 1846-1852, was one of many in San Francisco. His spread of one Spanish league (4444.34 acres) covered one-sixth of San Francisco. In the geographical center of town, it was bordered by other ranches often named for their owners: Benito Diaz Rancho, Bolton Rancho, Jose Bernal Rancho, Ridley Rancho and de Haro Rancho. Reconciling the 1857 patent map of Rancho San Miguel with a contemporary city map gives a fresh appreciation of the size and boundaries of the Rancho.1

The northernmost boundary ran diagonally across Mt. Sutro behind University of California, San Francisco. The southernmost tip went beyond the county line into Daly City. The eastern border was almost entirely San Jose Avenue. Much of the western side was Junipero Serra Boulevard. When Noe determined the boundaries of his Rancho, he knew the land well enough to carve out the most beautiful part. Even today, the roll of the dazzling Rancho hills against the city's sky is splendid. Parts of the Rancho landscape are still ruggedly glorious. Places like Glen Canyon, Twin Peaks, Laguna Honda, and Mt. Davidson are not only magnificent but some have been carefully protected to preserve meadows, grasslands, and ravines as they were known by George Vancouver and Jose Noe. In the distance, above the rooftops of today's streets, the radiance of those majestic Rancho hills glows through the subtle seasons of San Francisco's yearly changes. Rancho San Miguel was (is) exquisite land.