Originally published in The Semaphore #154, Autumn 2000 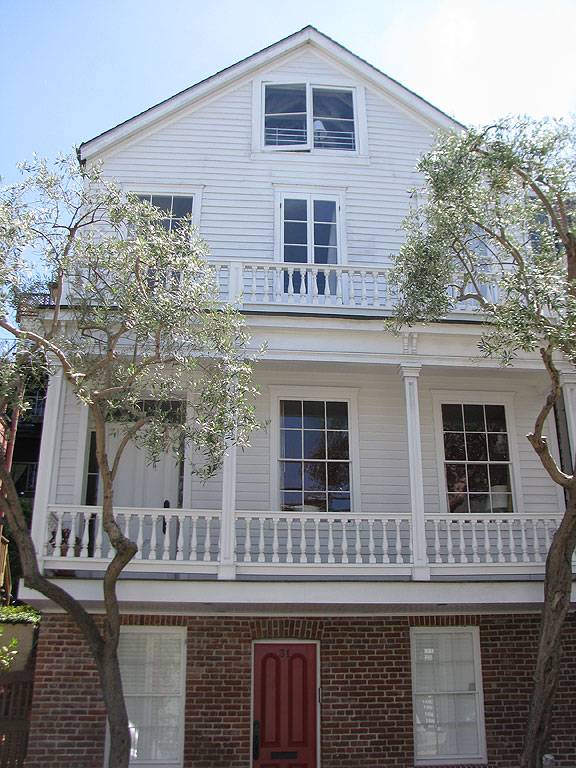 If the walls of one of San Francisco’s oldest residences could talk, they would probably talk loudest of the night in February 1927 when the police arrived at 2 a.m. to shut down an all night “tea” party at 31 Alta.

Today, the Greek revival railings of the home’s double-decker balconies sag quaintly in front of the 150-year old Grand Dame and hang out over Alta Street and the brick first floor like Old Quarter iron balconies of Bourbon Street. The top floors are white common clapboard, and back in 1852, when Captain Richard Andrews built his home, the living room was located on the second floor, the family bedrooms were on the third floor and the maid’s quarters were in the attic. Kitchen design considerations in the 1850s appeared to revolve mainly around keeping the house from burning down, and as was common, the cooking area and dining room were located as far from combustible clapboard as possible, in this case, in the brick semi-basement.

The most infamous inhabitant of 31 Alta throughout the last century was a reputed Russian noble, Myrtokleia Sawvelle who, according to David Myrick’s San Francisco’s Telegraph Hill, converted the brick dining room and kitchen into a “night club.” Myrick reports that printed cards were sent to a prospective clientele announcing her Telegraph Hill Tavern as having “all the atmosphere of the Montmarte with a Marine view.” 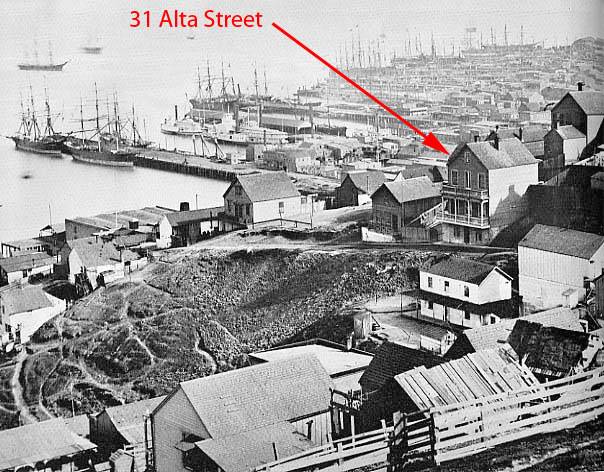 Apparently the views from the double balcony were even more striking than they are today. A photograph taken during the 1850s shows the broad, open view from Alta street before it was paved in the 1930s. Today that view is partially blocked by all the rest of the buildings now occupying the north side of Alta: modern architecture’s answer to straightforward utility. According to Myrick, Myrtolkleia (who came to be known as Myrtle) served tea at two in the afternoon, followed by dinner at six and supper after ten; while a Sunday morning brunch was offered from eleven to two.

On that eventful night in February 1927, Myrtle’s guests must have been carousing on the balconies, howling at the moon just as the yuppies are want to do nowadays at 2 a.m. on Columbus Avenue. However, on that night on Telegraph Hill the neighbors were having none of it. The constabulary were called, and the Black Maria arrived to escort Myrtle and her party to the city jail for the rest of early morning. 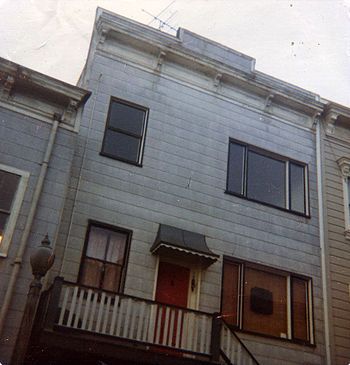 Myrtle not only had considerable skill in the culinary arts and the charm to be a gracious hostess, but she was also a pro at public relations. While the press headlined the story “Wild ‘Tea Party’ Raided”, her account painted for the reporters a not unusual evening of tea and art appreciation. Apparently, Myrtle was giving a private exhibition of a new work of art by Elwood Decker described as “an esoteric blue damsel charging through a red fog.”

“We were sitting around admiring Elwood Decker’s new painting,” relates Myrtle Sawvelle’s account in the press. “We weren’t even drinking anything but tea and I was making a pan full of biscuits for a little supper when the police came and made us all get in that black wagon.

“Some of the guests who arrived late were making quite a bit of noise but we didn’t realize that this was disturbing anybody,” she said. “We are going to start all over again with a tea room and this time there will be no nights in jail.”

According to Myrick, it was not to be. Her food was exotic, her liquor was good — but her timing was poor because her teas were taking place during Prohibition. Her homemade brews landed her in jail again for 90 days, and she was promptly appointed jailhouse cook. Tackling her new job with gusto, Myrtle became the heroine of her fellow inmates. Her fellow prisoners never ate so well, in or out of jail, and it was a sad day when she was liberated. A year later, Myrtokleia retired to Carmel. 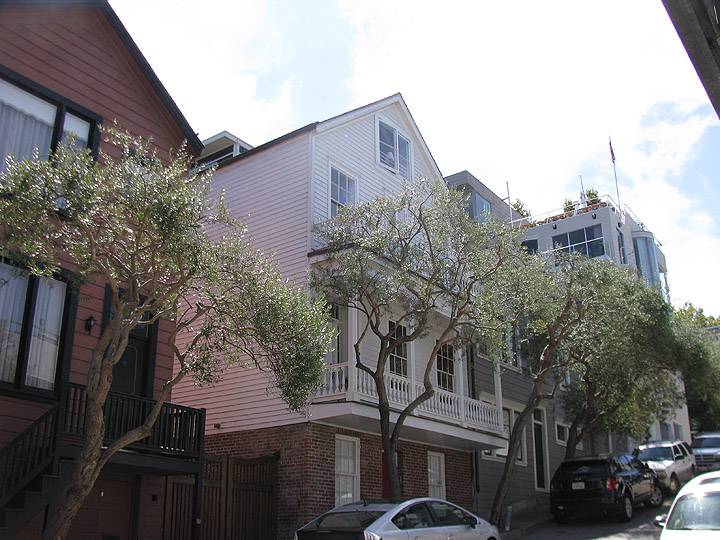