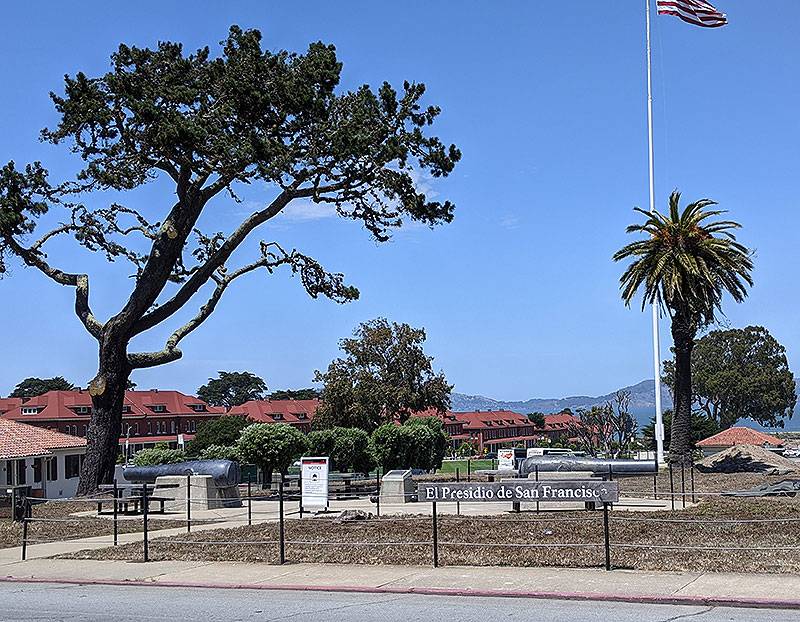 The Main Post of the Presidio, with an archaeological dig just beyond the sign and the cannon. 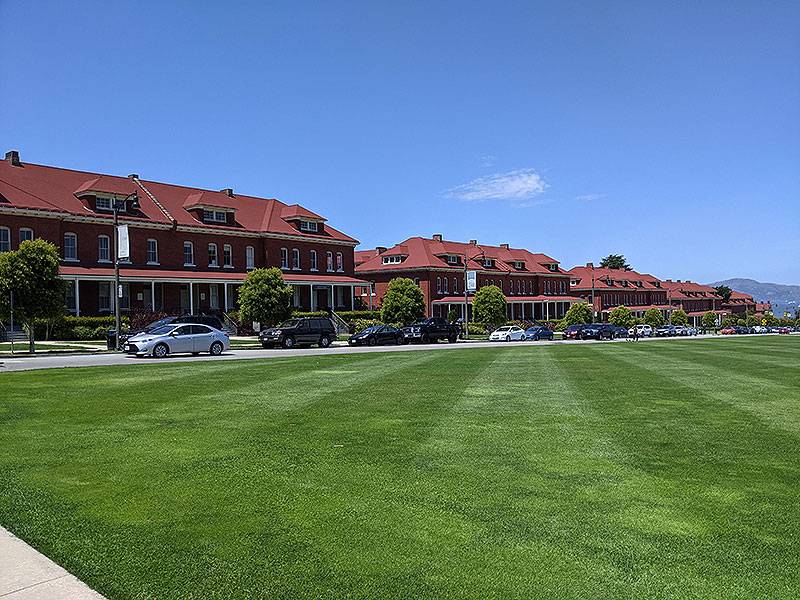 When people hear “national park” they think Grand Canyon, Yellowstone, and Yosemite; but with 1,400 acres, the Presidio of San Francisco, part of the Golden Gate National Recreation Area (GGNRA), is the most visited national park in the country with over 10 million annual visitors (Post to Park Transition). Because the Presidio was a US Army post for 150 years, it has the infrastructure of a small city, including an electrical grid, large campuses of historic structures, a transit system, and post office. All of these things make it extremely attractive to developers and civic leaders looking to solve a housing shortage in San Francisco; however, the expansive open space and natural resources make it special, a green lung for the Bay Area (Niekerken, 'Camelot' of Army bases: SF's Presidio shines in newly discovered photos). Balancing the competing interests of real estate developers, environmentalists, and civic leaders, has resulted in a unique park management model which includes partnerships between the National Park Service, the GGNRA, and the Presidio Trust (Meyer et al., New Guardians for the Golden Gate: How America Got a Great Nnational Park).

The Presidio of San Francisco was a military base for three different nations—Spain (1776–1821), Mexico (1821–1846), and the US (1846–1994) (U.S. Military Period: 1846-1994). Due to its strategic location at the entrance of San Francisco Bay, the Presidio played an important role in every major US war. Following the 1906 San Francisco earthquake, the Presidio served as a refugee center for displaced city residents and a host to the Panama-Pacific International Exposition (World Fair) of 1915 which helped boost the economy of San Francisco after it rebuilt itself from the earthquake and subsequent fires (1906 Earthquake and the Army; 1915 Panama-Pacific International Exposition). Additionally, the Presidio was home base for some of the very first National Park rangers; 500 US army troops stationed in the Presidio served as park administrators in the Sierra Nevadas at Yosemite and Sequoia/Kings Canyon National Parks (The Buffalo Soldiers).

Following the end of the Cold War, the US government announced the Base Realignment and Closure Act as a way to bring efficiency and savings to the Department of Defense. The Presidio of San Francisco was one of many bases included in this first round of closures and it was transferred to the National Park Service and GGNRA in 1994 (Axtell, Pleasure Grounds and Iron Fences: Local and Federal Battles for Open Space in the Presidio of San Francisco, 1776-2001). The Presidio Trust Act passed by Congress and signed by President Bill Clinton created the Presidio Trust, which was responsible for ensuring the park’s financial independence; the Act stipulated that if the Presidio Trust could not achieve financial independence by the year 2013, then the land and structures would be sold via auction and the park would be closed to the public (The Presidio Trust Act).

While the Presidio Trust has successfully maintained the Presidio’s operating budget from the rent it collects from residential and commercial leases, it has been the subject of significant criticism since its inception. Many people think that in general, the Presidio Trust only seeks tenants, such as the George Lucas Foundation, who can pay for expensive renovations to the old Army buildings. Others are critical of the fact that since the Presidio is a federal enclave, the city of San Francisco does not have a say in its governance (Witherell, Presidio Bust). Finally, there has been a lot of controversy surrounding the fact that in spite of the many structures and land that make up the Presidio, it provides very little low-income housing which is a critical challenge facing the Bay Area (The Latest Presidio Disgrace). 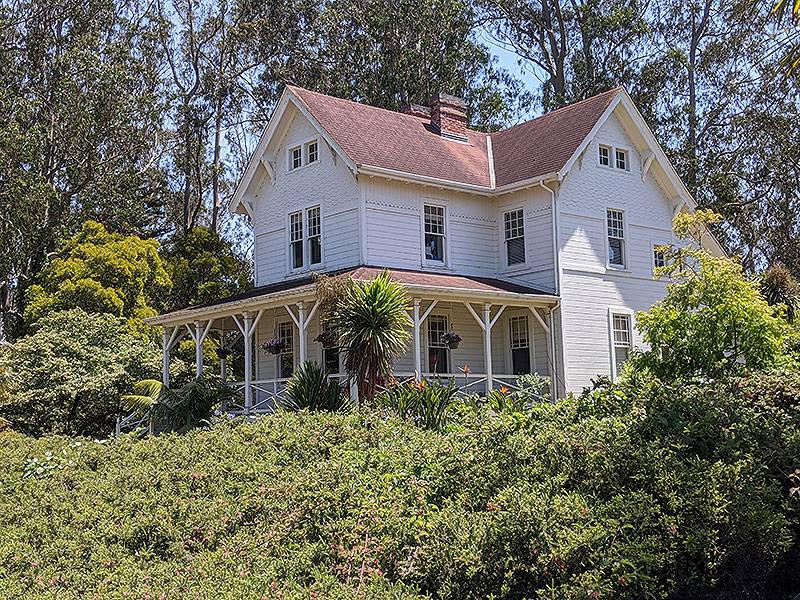 Dozens of 19th century wooden homes dot the Presidio landscape, now rented by the Trust to tenants who can afford the high rents. 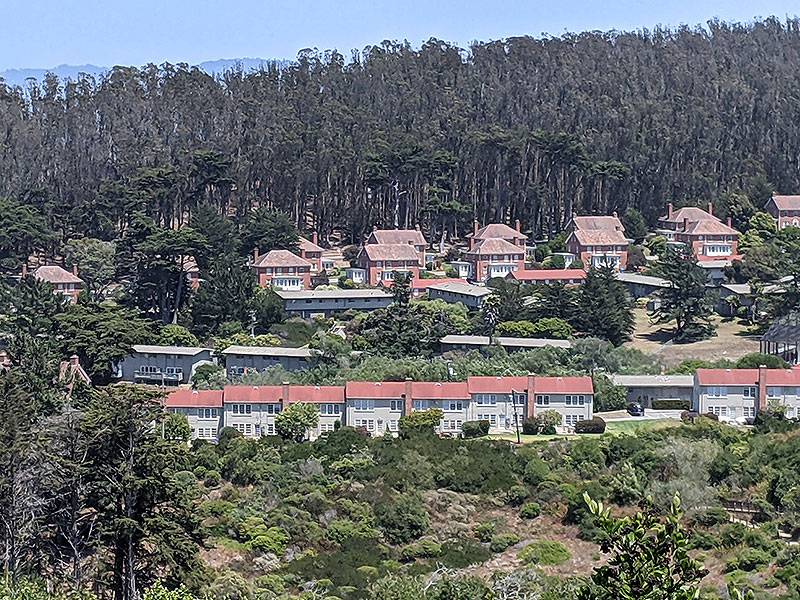 A mix of brick homes and apartment buildings in the southeastern part of the Presidio, seen here from Inspiration Point after recent forest management efforts have opened up the views. 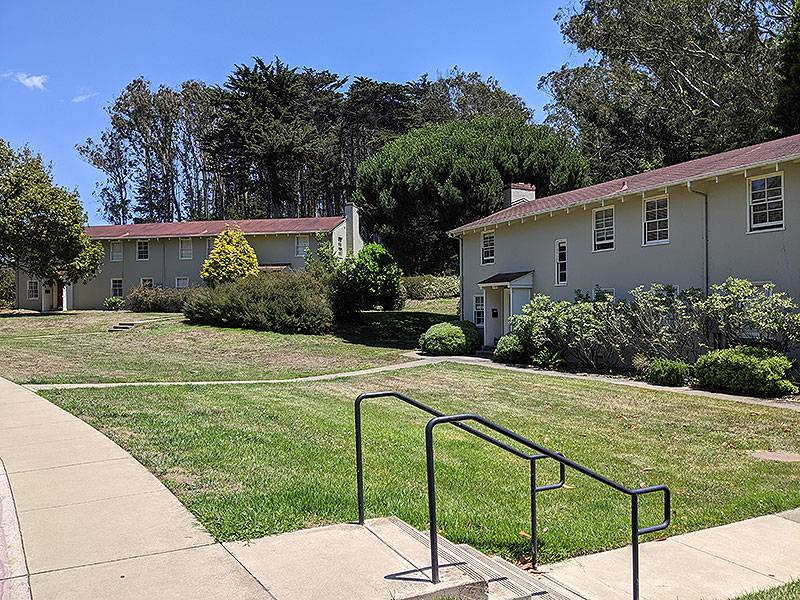 A lot of the housing on the former military base is not particularly desirable or well-designed. 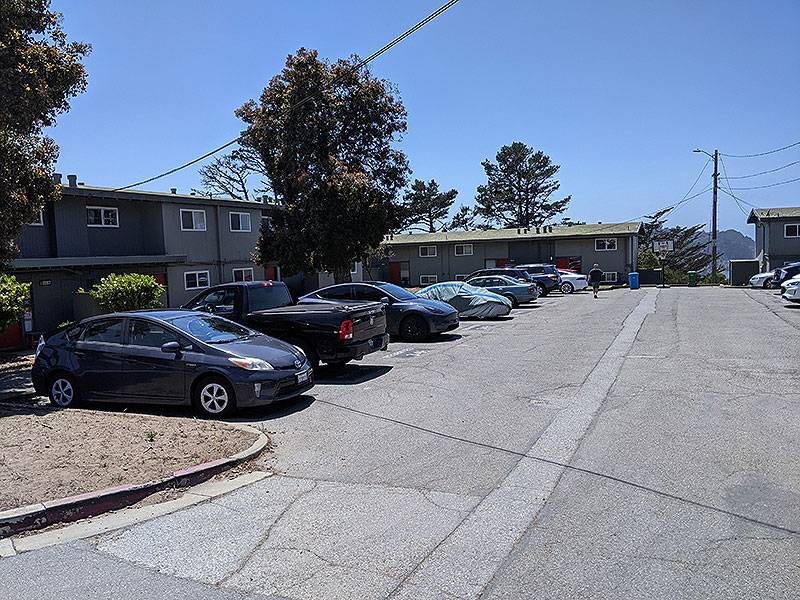 Could be on any military base in the farflung empire. 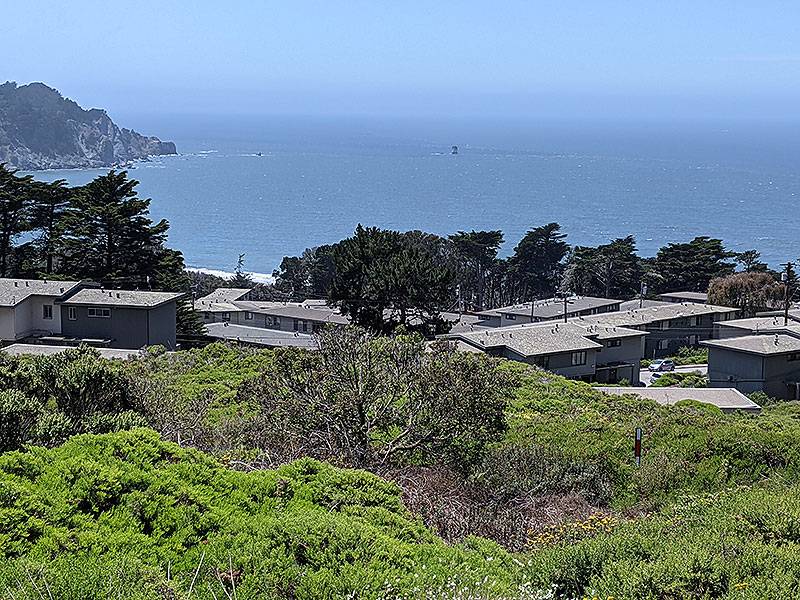 But there are a lot of former barracks overlooking Baker Beach and the Golden Gate, a nice place to live even if the architecture is bland and functional.

Because many of the buildings in the Presidio are in a state of disrepair as a result of age and neglect, prospective commercial tenants must be able to pay for renovations. This is a source of controversy because few mission driven organizations have these sorts of resources. For example, in 2006 the Presidio Trust selected the Walt Disney Museum over the California Indian Museum and Cultural Center (CIMCC) as the feature museum for the Main Post. While the Presidio spokesperson said the selection was based on the inability of the CIMCC to pay rent and put money into the building, CIMCC chairman Joseph Meyers claimed that the selection was based on the Presidio’s “own idea of what cultural projects are” which does not include CIMCC (Witherell, A Tale of Two Museums). Additionally, there were two development proposals for the Main Post – a luxury hotel and modern art museum sponsored by Gap Inc. founder Don Fisher—that caused significant controversy. Both proposals were rejected, but the distrust and outrage in response to the park's governing body was significant (Dial, Hotel plan revives old question: Can the Presidio Trust be trusted; Fisher's Folly threatens the Presidio).

Development in the Presidio is exempt from the city’s building codes, land is exempt from property taxes (including third parties who rent the space for private benefits), and businesses are exempt from California labor, land use, and environmental laws (Farrell, The Unconstitutional Truth about the Presidio). This frustrates many people as businesses in the park don’t have to follow California rules, while businesses “across the street” do.

Given the expansive landmass it occupies and 23 residential neighborhoods, there is anger over the fact that the Presidio does not offer sufficient affordable housing (The Latest Presidio Disgrace). In 1998, Proposition L, specified that 1,900 units (the majority of Presidio residences) be made available to individuals of all income levels and that some residences be made available to the SF homeless population; however, opponents of this proposition, including Congresswoman Nancy Pelosi and Presidio Trust board members, stated that the Presidio was never intended to be used by the city in order to satisfy its social needs. Ultimately, this proposition had no impact on the development of the Presidio (Levy Bid to Move Homeless Into the Presidio). Today living in the Presidio involves a competitive application process with long wait lists. While there are some residences reserved for Presidio employees and a larger complex for formerly homeless veterans, most residences are single family units occupied by middle to high income individuals (Redmond, The Presidio: Lessons in privatization).

The phrase “split the baby” comes to mind when analyzing the criticism of the Presidio Trust and its financial management of the park; however, its unique strategy, an anomaly in national park management, has been successful both in meeting its financial mandate as well as preserving the historic structures and ecology of the park. This success is due in large part to adaptive reuse, the process of reusing an existing building for a purpose other than which it was originally built or designed for (Wong, Adaptive reuse extending the lives of buildings). The Presidio Trust has become a leader in adaptive reuse, enabling old military buildings with great bones to enjoy new life (Meyer et al., New Guardians for the Golden Gate: How America Got a Great National Park). 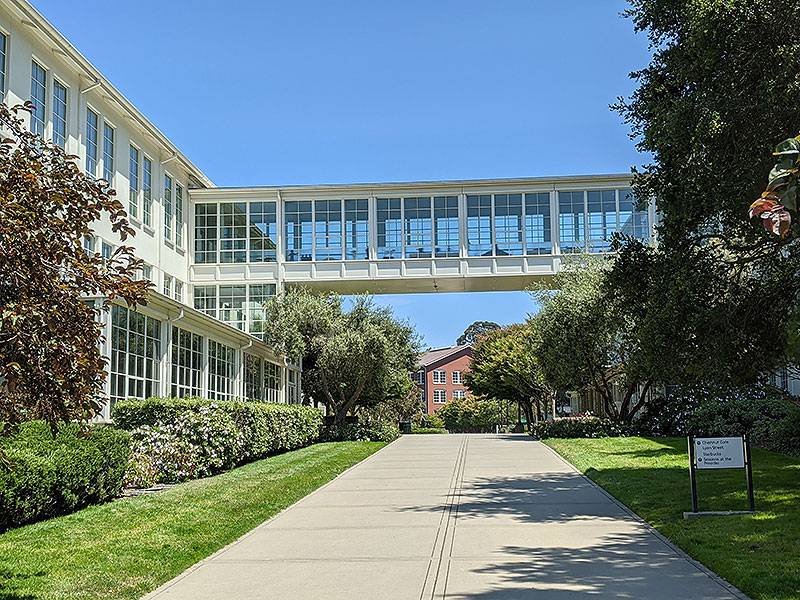 Skybridge between buildings at the Lucas Digital Arts Center that supplaned the old Letterman Hospital. 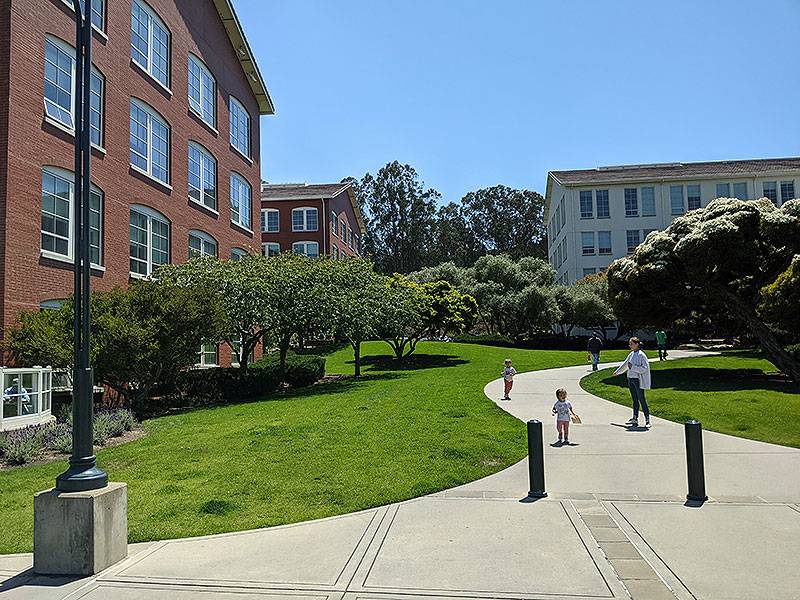 The Lucas campus was designed to blend in with the historic architecture of the Presidio.

Sometimes slight alterations to the interiors of structures is all that is needed to accommodate new uses; it did not take many modifications for the former Army commissary to accommodate the large retail outlet, Sports Basement. Similarly, not much work was required for the former airplane hangars on Crissy Field to be transformed into a trampoline park, swim school, and rock-climbing gym all utilizing the large, open interiors and high ceilings (The Presidio Trust Management Plan). The historic Letterman Hospital buildings, on the other hand, needed more extensive modifications to transform into the Letterman Digital Arts Center, occupied by Lucasfilm and other digital production companies. Extra-wide corridors and hallways of the old hospital were fitted with storage shelves and cabinets so as to make use of otherwise underutilized space. Two porte cocheres for loading/unloading patients were enclosed, creating large conference rooms (Presidio Trust Management Plan—Land Use Policies for Area B of the Presidio of San Francisco). Critics denounced some of these modifications as a pro-business sellout by the government, however, the Presidio Trust has worked hard to find tenants that work on public, environmental, and cultural issues such as health, global peace, education, and sustainable development. The Thoreau Center for Sustainability is an example of one such tenant and it currently has a 55-year lease (The Presidio Trust Management Plan). 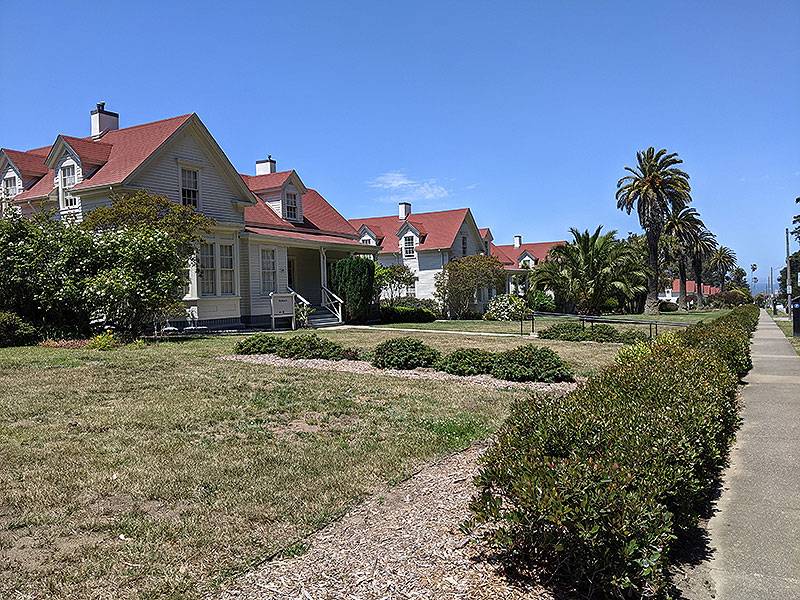 These beautiful old residences of Officers' Row are now mostly occupied by various companies and non-profits.

The Presidio’s most recent redevelopment project was the conversion of the dilapidated Public Services Hospital into luxury condos. In this redesign, the exterior was restored to its original 1930’s design, removing wings that were added in the 1950’s. Additionally, developers reused original materials including façade doors, marble wainscoting, and brick exterior. The 230-unit building is LEED Gold certified, and will provide the Presidio with $685 million from the 75-year lease (Peak Best Rehab/Renovation—Presidio Landmark). The project received a lot of criticism as it did not include any affordable housing, and it increased traffic in the surrounding neighborhood; however, it was integral to the Presidio’s plan to reach the goal of financially self-sufficiency (Playing Hardball in the Presidio). 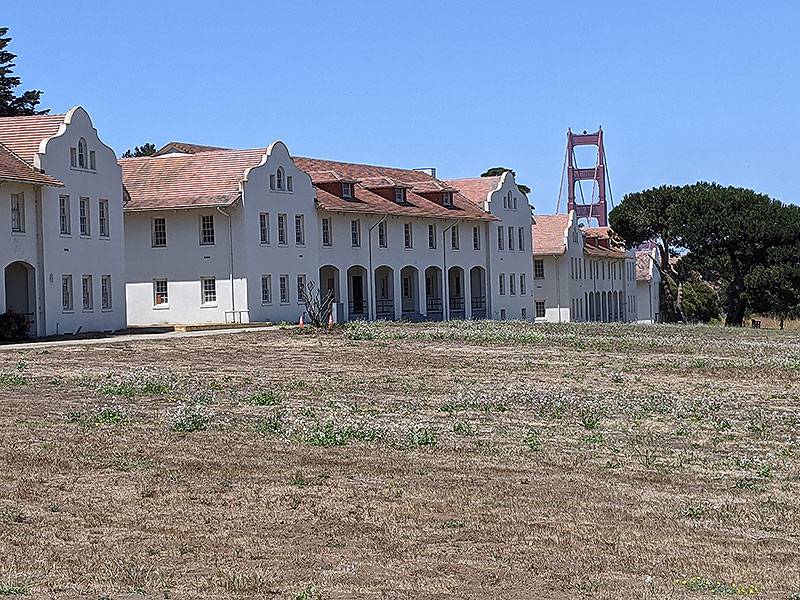 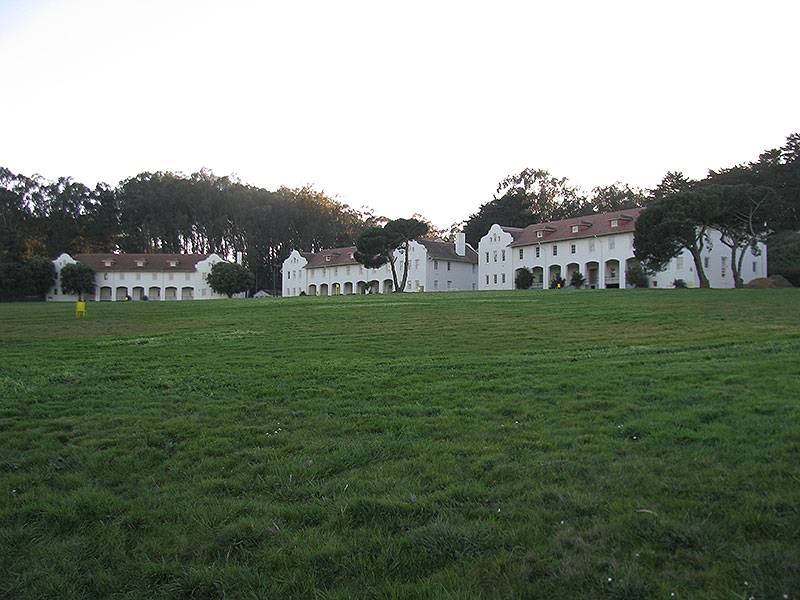 The Fort Scott site is the largest redevelopment opportunity remaining in the Presidio. Constructed between 1909 and 1912, the 30-acre campus features 10 military barracks surrounding a green lawn and 12 adjacent buildings that are mission revival-style architecture (Fort Winfield Scott). Before the Covid-19 Pandemic, there were several proposals to redevelop the Fort Scott campus. A development team led by Equity Community Builders submitted a proposal for the “Fort Scott Campus for Change” which would include classrooms, incubator space for startups, community space, gardens, public plazas, an observatory, and a transit center all for "mission-driven" organizations. Three of the four organizations involved—California Clean Energy Fund, the World Economic Forum, and Open AI—would have offices on the campus, while the fourth organization—the We Company—would manage the campus. Ultimately this proposal was rejected, and there is still speculation as to what will fill the Fort Scott campus (McBride, Redeveloping Fort Scott in SF's Presidio is goal of joint plan by four groups).

While it is far from perfect, the Presidio Trust’s strategy of financial self-sufficiency through adaptive reuse has been successful. A former military outpost designed to keep people out is now one which welcomes the public and is focused and committed to preserving the green space and historic structures that make the Presidio so unique. 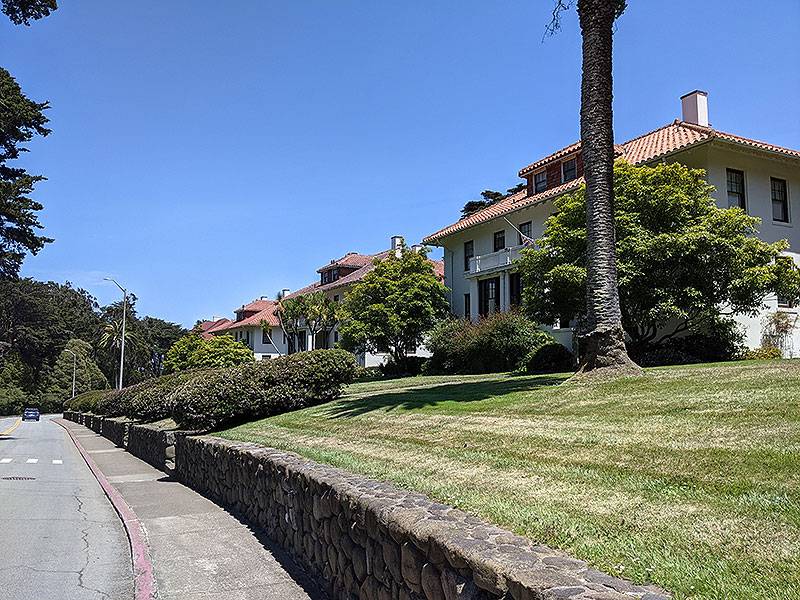 There are still many quite luxurious homes lining the streets of the Presidio, evidence of the largesse bestowed on the officers who once made this their home during the long military era.

Presidio Trust Management Plan - Land Use Policies for Area B of the Presidio of San Francisco , May 2002. www.presidio.gov/presidio-trust/planning-internal/Shared%20Documents/Planning%20Documents/PLN-301-PTMP01-ExecSum.pdf