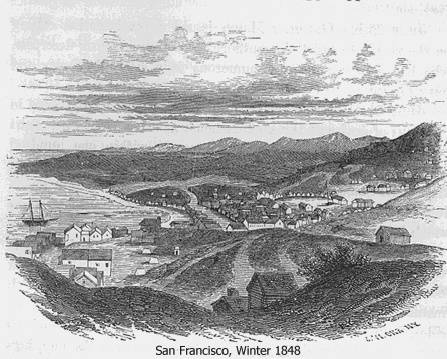 The village of San Francisco in the Winter of 1848

MARCH 15th--As a sign of the times, a weekly wholesale price--current was first published in San Francisco in the columns of the Californian of this date. In the California Star, of the 18th instant, likewise appeared a similar document, and remarks on the state of the markets for the first time.

About this period, the population of the town was ascertained by the Board of School Trustees, in canvassing the place for educational purposes, to be, 575 male and 177 female adults, and 60 children of ages to attend school, making a total of 812. Adding the number of infants and children still too young to attend school, the whole number of inhabitants amounted to about 850. The buildings of all kinds numbered 200. There were two large hotels in the place, besides boarding and public houses, and houses attached to ten-pin alleys, billiard saloons, &c.; so that the town was becoming one of some consequence, and was assuming the pretensions and attractions of older, wealthier and more populous communities. Two wharves were in the course of construction; and extensive stores and warehouses had been erected. There were twelve mercantile houses established, consisting of agencies for large firms, in the East and in the Sandwich Islands, auction and commission houses, and importers from the United States direct. The facilities for discharging ships and filling them anew with cargo, were rapidly increasing. There was much bustle, and even enthusiasm among the inhabitants, which promised a flattering future to the town. Current expenses were too high to prevent immediate fortunes being made; still most persons in business believed they were laying the firm foundations of early wealth.