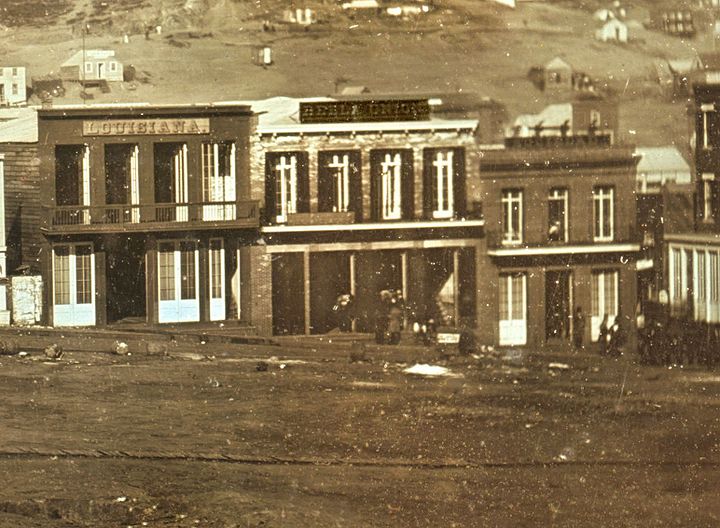 Built as a gambling palace in 1849, the Bella Union quickly began hosting burlesque sideshows, which eventually supplanted gambling as the main attraction. Its biggest star was a 19th-century performance artist named Big Bertha. An unusually massive woman, Bertha first showed up in San Francisco claiming to be a wealthy widow in search of a man to help protect her fortune. When a suitor appeared, she asked him put up a sum of money as an indication of good faith, to be invested in a private concern of hers. Big Bertha's suitors never saw their money again, and refused to press charges for fear of public ridicule.

As she gained fame, the manager of the Bella Union hired her and put her on display in an empty storefront on Market Street as "Big Bertha, the Queen of the Confidence Women, Admission Ten Cents." Bertha's act consisted of a long "confession" of awful crimes she had never committed, followed by an off-key rendition of "A Flower from My Angel Mother's Grave." This went over so well that she took her act to the Bella Union and turned in into a song-and-dance revue, which soon became the toast of the town.

Meanwhile, another star named Oofty Goofty, plastered with tar and horsehair, was wowing them with his Wild Man of Borneo Act, during which he repeatedly snarled out his name while shredding hunks of raw meat with his teeth. The management at the Bella Union, seeing the natural chemistry between San Francisco's biggest female and male stars, decided to cast Oofty and Bertha as the leads in Shakespeare's Romeo and Juliet. Their move was a decade ahead of its time, for it wasn't until 1896 that Alfred Jarry destroyed Macbeth with his outrageous parody Ubu Roi. Though the Bella Union version of Romeo and Juliet pretty much stuck to the original script, a few minor revisions in stage directions were necessary. Big Bertha was so heavy she couldn't possibly be hoisted to the balcony, which wouldn't have supported her in any case. So Oofty Goofy howled out Romeo's lines from the balcony, while Bertha played Juliet from the ground. Oofty Goofy, unable to shed his typecast persona, played Romeo as the wild man of Borneo; Bertha emerged from each performance covered with bruises from head to toe. But her fortitude and talent paid off; eventually, she became the owner and manager of the Bella Union.

Oofty, after a similarly long and illustrious career, met a different, sadder fate. His big career move came when an irate clubowner, embarrassed at having booked such a loser, had the bouncers pick up Oofty and throw him through the air and into the street. Oofty slammed the into the pavement with enough force to crush the spine of an ordinary mortal.

Staggering to his feet and brushing himself off, he made a remarkable discovery: He felt no pain! Just to make sure, he entered the nearest saloon and offered to let its nastiest-looking denizen punch him for a nickel. Still, he felt no pain. Soon Oofty was earning a good living with his expanded repertoire: for a nickel you could slug him, for a dime you could kick his rear end with all your might, and for a quarter you could slam him in the butt with a baseball bat.

Practically every male in San Francisco, from the movers and shakers to the lowest denizens of the Barbary Coast, could brag of having banged on Oofty at least once. But finally, after decades of suffering the painless blows of fate, Oofty suffered the inevitable fatal blow. Heavyweight champ John L. Sullivan busted his spine with a pool cue, and Oofty died broke a couple of years later. 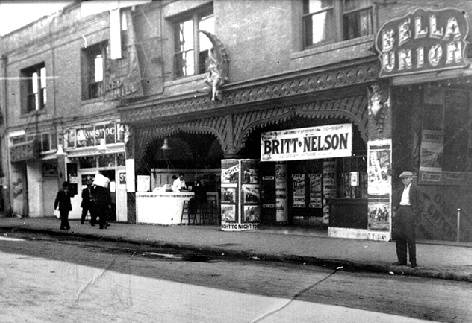 Photograph of a later incarnation of the Bella Union, first run as a gambling hall in 1848 along Portsmouth Square.