Old Bayshore Highway looking northward in 1929, not long after its construction.

In the spring the Santa Clara Valley burst into glorious life. Acres and acres of fruit trees—apricot, peach, cherry, pear—put on a spectacular display of blossoms in shades of pink and in white. San Franciscans made it a point of making at least one Sunday outing to the Peninsula to enjoy the dazzling fairyland .

To get there you drove down the Skyline Boulevard, a lonely two-lane road that skimmed the ridge of the hills above the ocean or you took the more popular El Camino Real. No more than two-lanes also it passed through the peninsula towns—South San Francisco, Burlingame, San Mateo, etc.—and was usually crowded with local traffic as well as Sunday drivers.

The news that the powers-that-be had decided to build a three-lane highway as an alternative to El Camino came as a surprise. There appeared to be no protest and so one day we found our street, Le Conte, heretofore a grassy space between houses on each side, torn up. For months we picked our way through enormous clods of dirt that turned into mud after the rains. A slight crisis occurred at our house on June 6, 1926, when the doctor who was to deliver my little brother at our house was delayed when his car got stuck in the mud. 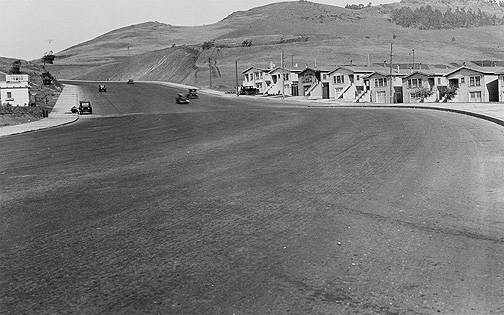 Bayview Hill as seen from the south on Old Bayshore Highway in the 1920s.

The construction split Le Conte in two; the eastern block disappeared, along with it the big ditch that had been a source of water cress and pollywogs. Then the part of Le Conte that started at San Bruno Avenue was paved, giving us sidewalks and gutters that made our games of “One Foot Off The Gutter” legitimate. Because the houses on our side of the street had been built against the lower slope of a hill, a short flight of cement stairs was built, ending in a large cement landing at the foot of our wooden steps that led to the front porch,.

We adapted to the new conditions and, as children will, enjoyed the sand piles that were piled up. A concrete mixer served as a slide, kids entering the barrel from the top and sliding around in the smooth interior. We chewed tar that we pinched off the back of the delivery truck.