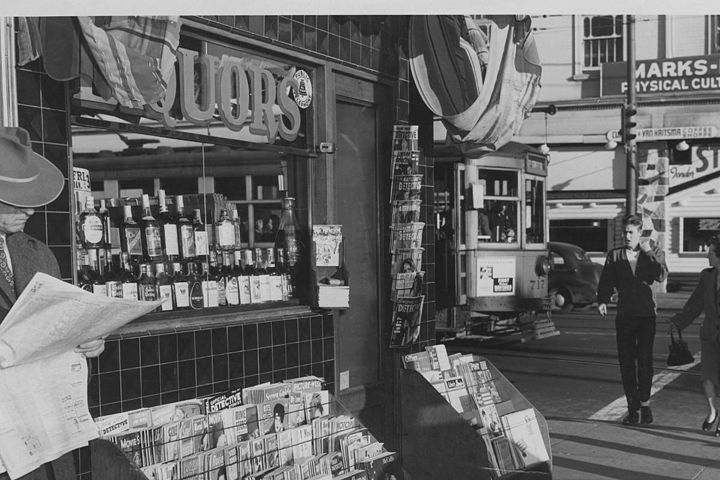 Jack London never really wanted to be Mayor of Oakland. He ran for the office only because of the certain knowledge that he would not attain it. And who could blame him? The job is low-paying, part-time, and largely titular. In 1931, the Oakland Tribune, the city's only newspaper and traditional spokesman for the coalition of ruling business interests that includes Kaiser Industries, Safeway Stores, the Port of Oakland, and some of the larger local banks, convinced municipal voters that lower taxes would result from government run by a non-elected city manager. Lower taxes did not result, but what did was a permanent structure by which the City Manager, picked by the City Council, could wield power—along with the members of the semi-autonomous Port Commission. Since 1933, a series of anonymous bankers have been running the show.

Thanks to another law forbidding identification of candidates with specific parties—aimed originally at destroying the Socialists—and another measure that prevents elections by district, only seven non-incumbents have been elected to the City Council since World War Two without Oakland Tribune backing. This is not rule by fiat, it is rule by editorial. And it serves to keep white, conservative Republicans in charge of a black, liberal, Democratic city. It took until 1977 to elect Lionel Wilson, the first technically black mayor—and one of the first who was technically a Democrat. And Wilson was just barely squeezed into office after the blandest campaign possible and years as a thoroughly benign, thoroughly spic-'n-spanned judge. He succeeded John Reading, a former hot tamale salesman and possibly the last in the long line of balding, thin-tied businessmen who sat in the mayor's chair. 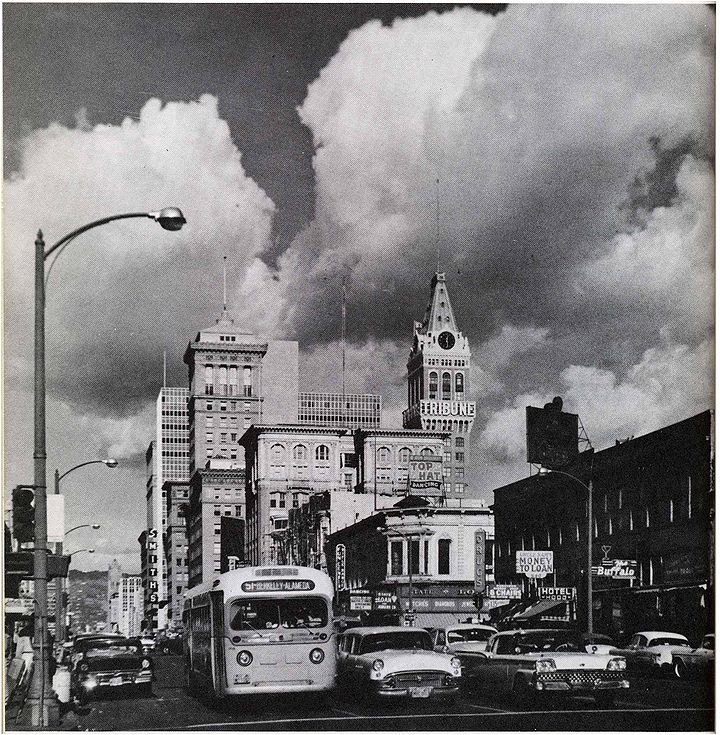 In Oakland, they call this democracy. And most of the calling is done by the Tribune, which oversees its city from offices of its turreted tower. The tower was fashioned after the Medici palace in Florence; it could almost be a double except for the giant TRIBUNE flashed in red neon. The Medicis were more discrete than the Knowlands, Oakland's publisher-princes. Their newspaper's dominion inspired the rallying cry of the 1946 General Strike: "Take the Power Out of the Tower!" Set off by the police department's blatant strike-breaking tactics during a store clerk's walkout, the action eventually involved 142 locals and 100,000 workers. The strike paralyzed Oakland for several days. In its aftermath, an AFL-endorsed slate won election to the Council, only to be hounded into later defeat by the Tribune’s vicious redbaiting. One labor councilman was driven to suicide. Strangely, his fate was shared by Tribune scion William F. Knowland, who had served in the Eisenhower years as California's Senator and Republican Majority Leader. 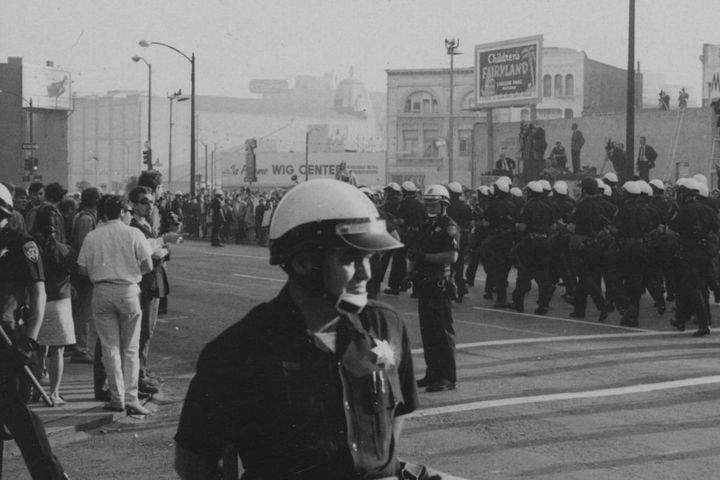 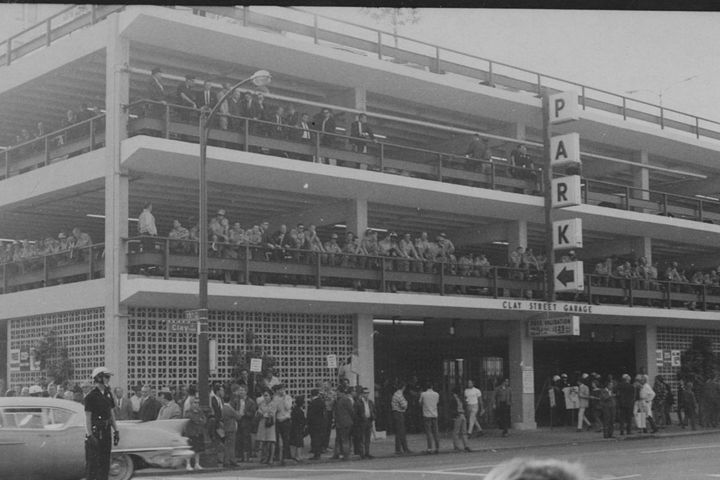 Electoral politics in Oakland are closed shut like a safety deposit box. This set-up has spawned numerous extra-curricular groups, all of them eager to "vote in the streets." The first non-violent demonstrations aimed at blocking the path of Vietnam troop-trains ended in the trial of the "Oakland Seven"—first case and first magic number of defendants in the Sixties' parade of cases and numbers. The Black Panther Party was not originally aimed at the ballot, and when they sought entry to the parliamentary process, they found there was no room. In 1973, Party Chairman Bobby Seale took a page from Jack London with his campaign for mayor. He called it a "people's earthquake," but the only thing it would shake and shatter was the image of the Panthers. Sporting a three-piece suit, suddenly concerned with the "business climate," purposely vague about whether he had become a democrat with small or large "d," Chairman Bobby proved a slippery candidate. Seale's program no longer centered on self-defense or free breakfasts for the poor; he argued for the completion of the Grove-Shafter freeway, so that Oakland could become a thriving convention capital, a new Honolulu. He mused over a Third World Trade Center, where tourists could sample an international spread of "soul food." Seale would fare a good deal better than Jack London. He forced the Republican Reading into a run-off and wound up with 35 percent of the vote—not bad for a militant who'd recently been bound and gagged and accused of murder. Obviously, Oakland did not think of their civic son as a killer. But the East Oakland youths, who might have put the Panthers in charge of city patronage, stayed locked in their usual apathy. That election day, like Oakland's three World Series, had its significant number of "no shows."

When Seale was going straight, Huey Newton was going sour. Freed from prison, Newton set up his own private ward in a penthouse overlooking Lake Merritt. The prophet who once summoned forth "the armed wrath of the people" now took out his own wrath on a tailor, on a local disc jockey, and on a nineteen-year-old prostitute Newton was accused of murdering because "she didn't know his name." When the Supreme Servant of the People exiled himself briefly to Cuba, rightists and leftists alike were relieved.

In the vacuum left by the Panther's discredit, another self-proclaimed vanguard sprang up: the Symbionese Liberation Army. Oakland cast about for their Symbions. Who were these creatures? Parlez-vous Symbionese? Supposedly, Charlie Finley was high on the S.L.A.'s "hit list." "Death to the fascist insect who preys upon the people!"—or upon his managers! Instead, they handed premature sainthood to Marcus Foster, a popular and benign school superintendent. He was shot going from a committee meeting to his car. Why? Because he proposed students carry special identification cards. The kidnapping of Patty Hearst would be their next project, and Oakland would have a new joke. "Q: What's a Hearst-burger? A: No Patty. The S.L.A. became more popular when they made the Hearst family arrange a giant giveaway of free food. The same constituents who had supported the Panthers' food programs now lined up to grab at the goodies. Oakland's decade of black militancy ended where it had begun: in the voting booths and on the bread lines. Remarkably, this hotbed of radicalism had escaped without a conventional ghetto riot—until the day the Hearsts sent in tuna-fish and canned beans, and East Oakland attacked the grocery trucks like sans-culottes storming the Bastille.

There will be more losers, and more winners, trying to change the rules of this game. A black poetess put it best: "The revolution ain't over, it's jus' tired an' it's resting .. . 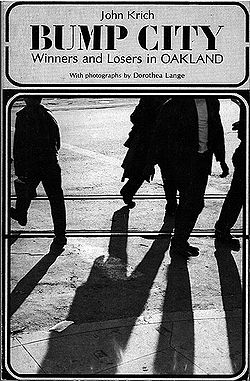