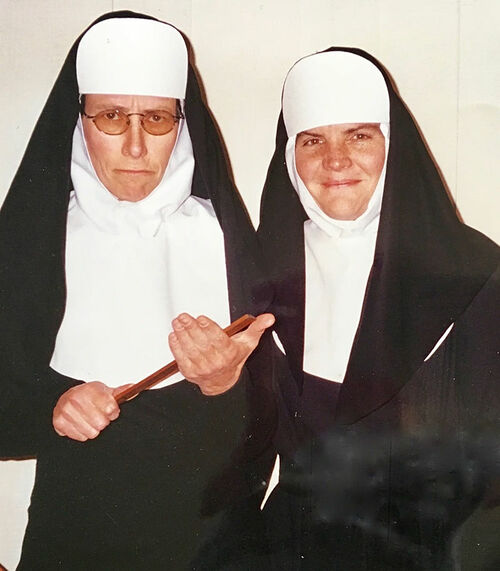 When sing-along movies became a big thing in the early 2000s they would sell out little-used movie houses. People dressed in theme costumes waited in long lines with their kids to get in at venues all over the country. In San Francisco the place to sing along with musicals was and still is the Castro Theater, the 1920s-era movie theater in the heart of the gay district. What could be better than flaunting your clever musical movie costume on Castro Street?

My only experience with nun habits prior to our adventure had been the Sisters of Perpetual Indulgence. The Sisters, a group of flamboyant gay men, formed in the 1970s partly as an antidote to the anti-gay misogynistic backward teachings of the Catholic church. They dress in outrageous nun costumes and worked hard to make the AIDS crisis visible when it was ignored by the powers that be. I love the Sisters, still a presence in San Francisco and especially the Castro. It was at a Sisters event in the early 80s called Holy Daze (including a mix of religious cults) where I learned about the plagues of Egypt and how to counteract the curses by declaring feh! and flipping wine at one another until you are covered with wine. Our plagues were things like union busting and Reaganomics. On the stage was set a long table with 12 “apostles” including The Cosmic Lady who we would see in the Mission handing out flyers with a picture of the Milky Way and an arrow with the slogan “You Are Here.”

Barb took charge of the costumes, which she announced would reflect the Catholic order of her hometown in southern Indiana, the nuns who were her teachers in Catholic schools. Her own aunt had taken the veil and so Barb knew exactly what the wimples, scapulars and associated habit parts looked like. No Sisters of Perpetual Indulgence influence here with elaborate headpieces and drag queen makeup. We would look like the real thing, authentic representatives of the Order of St. Benedict from the convent on the hill in Ferdinand, Indiana.

I was dispatched to second-hand stores in the Mission to pick up long-sleeved black dresses to serve as tunics or robes. That was the easy part. On a stormy Saturday we assembled material to create the wimples, veils and coifs. Barb, a crafty gal who was always good at making things, dove into the project with great zeal. Perhaps she was finally realizing a long-held dream: some part of her had always wanted to be a nun, or at least to be seduced by one. My own part in this play was becoming clearer.

We worked all day on the project and when it was finished we were delighted with the results. Modeling the habit put me in touch with its medieval origins. The wimple covered my ears and blocked my hearing, cloistering me from the world.

On the day of the sing-along we got dressed early so we could show our friend Pat (also an ex-Catholic) our new personas. The final touch—black leather combat boots, just visible below the long tunics. In the spirit of both the Sisters of Perpetual Indulgence and the Sisters of St. Benedict we chose our names as brides of Christ. I was Sister Mary Mollybolt (in reference to my tradeswoman background) and Barb was Sister Barbwire. As it turned out, we should have reversed our names, as I was to be the bad nun and she the good. An important part of my costume was the wooden ruler I carried, slapping it on my palm menacingly. Barb couldn’t stop laughing; she was so delighted to finally be a nun.

Pat took our picture before we tripped over to the Castro. We made a great team, and I wondered if nuns teamed up in pairs the way cops do to interrogate or dispense punishment. I was getting into my role as the bad nun.

The Castro District is a place where adults can show up in just about any costume and not cause so much as a second look. Even on days when nothing special is happening, the Castro can feel like Halloween. We felt right at home strolling the street as nuns, along with others dressed as characters in the “Sound of Music”—the children dressed in curtains, even a mountain range.

We had arrived with plenty of time to eat dinner and so dropped in to a local eatery. The other patrons seemed shocked by our presence. We thought it was obvious that we were fake nuns. After all, the combat boots were visible elements. And this was the Castro. But our nun costumes sent some of the Catholics at this place back to their trauma-filled childhoods. They were really disturbed by my ruler. As we stood waiting for a table, people began approaching us and telling us stories of their encounters with the nuns and the Catholic Church. One woman recalled being hit with such a ruler as a kid. We became a means for these people to talk about the trauma they’d suffered at the hands of the Catholic Church. They had to tell us their stories. A man recalled his abusive Catholic education in Germany. They couldn’t stop. I was fascinated. We had become conduits for their emotions.

The scandal of priests’ child abuse in the Catholic Church had been ongoing and the Boston Globe would break the big story about child sexual abuse in the Boston archdiocese shortly after our foray into the Castro as nuns. But we got a sense of the underlying culture that night. Nuns are a powerful representation of the Catholic Church and abuse it dealt to its parishioners. Folks felt that they had to confess to us—dressed as nuns—their stories of abuse.

The sing-along was all that we’d imagined. We got to belt out How Do You Solve a Problem Like Maria? and all the other songs. We didn’t enter the costume contest. Compared to all the other imaginative costumes, the abundant nuns were rather boring. The mountain range consisting of nine mountains won a prize. We had great fun, but the most memorable part of my night as a nun turned out to be our inadvertent unleashing of traumatic memories among the people we encountered.