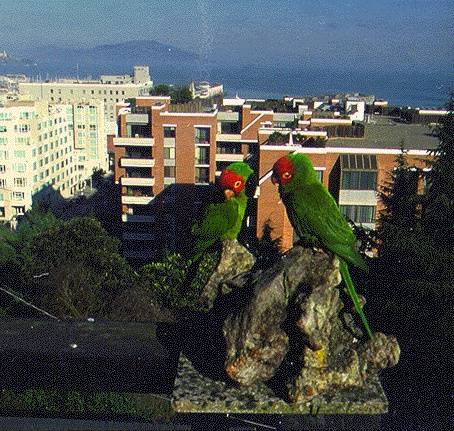 Coyotes, native to San Francisco since before European colonization, have made a remarkable comeback in the past decade or two.

There are two feral parrot flocks in San Francisco. One flock roosts near Dolores Park in the Mission and flies a territory that extends from Potrero Hill to Noe Valley and Buena Vista Park. The second flies the north waterfront area.

The Mission flock consists of around 20 Canary-winged Parakeets. I have had one reliable report that there were once as many as 40 of them. They are small parrots, averaging nine inches in length. This flock began as early as 1972. By 1976 their territory extended from Telegraph Hill to Dolores Park. The canary wings are the "wild parrots of Telegraph Hill" that appear in Armistead Maupin's book "Tales of the City". In the early 90s they were booted out of the northern end of the city by a new flock made up of a larger species of parrot.

The flock that currently flies the Telegraph Hill and north waterfront area is made up primarily of a bird called the Cherry-headed Conure or Red-masked Parakeet. Its territory extends from its roosting spot in Walton Square (which is surprisingly close to downtown) to the eastern rim of the Presidio. In the summer, non-breeding members of the flock will occasionally travel as far as Noe Valley for certain food trees. The founding members of this flock once traveled with the canary wings and knowledge of this end of the city was undoubtedly learned then. The flock of cherry heads began breeding in 1989.

Most people are understandably surprised when they encounter wild parrots in North America. But millions of these birds throughout the 70s, 80s and early 90s were shipped into this country to be sold as pets and many of them escaped. They are intelligent adaptable birds, and quite a few of them can tolerate non-tropical environments. A flock of 150 feral monk parakeets lives year-round in Chicago's Hyde Park. There are at least nine parrot species currently breeding in California. It has been estimated that there are more than 2,000 free-flying parrots in southern California alone. The real survival issue for these birds is not the cold, but whether they can find enough to eat. There are or have been in the recent past feral parrot flocks living in Berkeley-Albany, Burlingame, and Sunnyvale-Palo Alto.

Return to beginning of Habitat/Species Tour