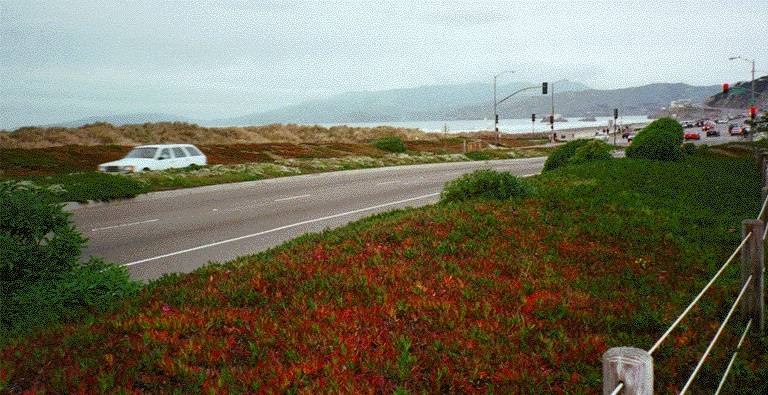 Iceplant, native to South Africa, is widely used along highways and in coastal dunes of California, but it chokes native plants and makes the soil more acidic. 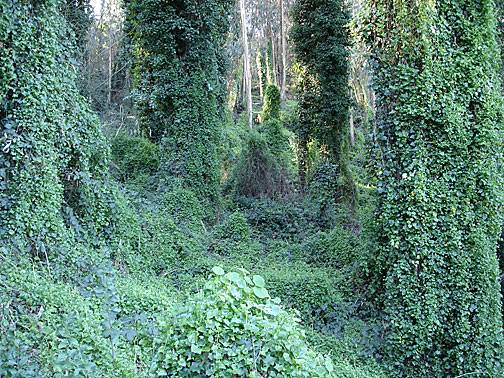 For wandering naturalists from San Francisco, traveling to the Mediterranean is like visiting a long-lost relative. A traveler in Rome may hear a different language but many of the weeds will be familiar. The sidewalks of Rome and the semi-natural parks of Milan are edged with the colors of home: bindweed (Convolvulus arvensis), scarlet pimpernel (Anagallis arvensis), wild oats (Avena barbata), wild radish (Raphanus sativus), and dozens of others. But in Rome and Milan, they're native.

A cosmopolitan suite of plants flourishes in cities worldwide, having spent thousands of years in an urbanizing Mediterranean adapting to high levels of human disturbance. So it's no surprise that they do so well in urban areas elsewhere, particularly those with Mediterranean climates, or cool wet winters and dry hot summers. (This syndrome is so unusual that it occurs in just five regions of the world: the Mediterranean, which has given this weather pattern its name, California, the Cape Province in South Africa, western Australia, and the coast of Chile.) In a recent study of five Italian cities and their flora, 42 species were so successful that they were found in all five cities. Most of these are native to the Mediterranean and hence adapted to disturbed conditions following several thousand years of urban growth (Celesti Grapow and Blasi, 1998).

San Francisco has many of these same ancient urban weeds, including more than 3/4th of those found in its Mediterranean cousins.

Around 40% of the San Francisco flora is non-native. Species from Mediterranean climates, particularly Europe and South Africa, contribute the greatest numbers. The South African contributions include some of the most ubiquitous weeds, including Cape ivy (Senecio mikanioides), Bermuda buttercup (Oxalis pes-caprae), and iceplant (Carpobrotus edulis).

Over the last two hundred years, millions of acres of native grasslands in California have been altered by overgrazing, agriculture, and urban growth. Intensive grazing began once Europeans arrived. The early San Francisco Bay missions kept more than 40,000 head of cattle. The 21 missions in California had more than 400,000 cattle grazing over one-sixth of California at their peak. By 1860 nearly 1 million cattle were grazing the state, along with another million sheep and 170,000 horses.

This intensive grazing, combined with fire suppression, weakened the resistance of native grasslands. Once dominated by native perennial grasses and showy carpets of annual wildflowers, California's native grasslands have been invaded by annual grasses from Europe, including farmer's foxtail (Hordeum murinum ssp. leporinum), wild oats (Avena sp.), and Italian ryegrass (Lolium multiflorum). Grasslands dominated by these annual species are far less diverse than native grasslands. Invasion by Mediterranean annual grasses has been implicated as a major cause of extinction and ecosystem decline in millions of acres of California wildlands.

Other non-native plant species have had a dramatic impact on San Francisco's natural landscape. Blue gum eucalyptus, Monterey pines, and Monterey cypress have been widely planted throughout San Francisco. These non-native trees are beautiful in landscaped parks such as Golden Gate Park, but they crowd out hundreds of species of native plants and other organisms when planted in natural areas. Now without any of the natural enemies that controlled their numbers at home, these trees are expanding rapidly wherever they are found. Wild radish, fennel, and other garden escapes are also taking over San Francisco's natural areas.

The spread of invasive species is one of the worst threats to biodiversity, one of the four horsemen of the apocalypse (the other three are habitat destruction, overhunting, and secondary ripple effects such as the loss of pollinators). More than a thousand acres in the Florida Everglades are lost every year, for example, to the Brazilian pepper tree and other "exotic" species that spread rapidly through wildlands. Such species often evolved on other continents where their populations were kept in check by various environmental factors, including climate, disease, insects, and other herbivores. Once released from these restraints in a new land, some exotic species can become invasive. They dramatically reduce biodiversity by covering extensive areas where nothing else can survive. Iceplant (Carpobrotus edulis), for example, can form thick mats in California's coastal sand dunes. Very few native species can grow where it has been allowed to spread unchecked. Invasive species can also affect ecosystems by altering soil chemistry and increasing precipitation via fog drip. Iceplant, for example, makes the soil more acidic and reduces the supply of available nitrogen, an essential element for plant growth.

Celesti Grapow, L., and C. Blasi. 1998. A comparison of the urban flora of different phytoclimatic regions in Italy. Global Ecology and Biogeography Letters 7:367-378.