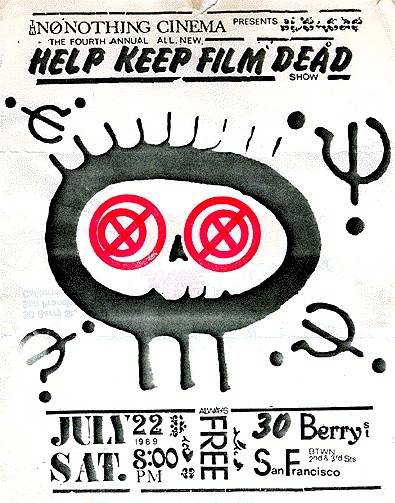 1989 Flyer for the No Nothing Cinema: Help Keep Film Dead

Filmmakers show something at the No Nothing. On July 4th 1982 "San Francisco's first emergency independent screening theater " sprang up at 30 Berry St. at the corner of 2nd St. and Berry. Dubbed the No Nothing Cinema, (based on the international "no" symbol) the venue was created by a local group called the "emergency filmmakers" to showcase experimental cinema

Well-equipped but unpretentious, the intimate 56-seat theater was flanked by a large outdoor courtyard garden/basketball court which allowed the screenings to manifest an environment of "no censorship, no cross, no crown, hot barbeque, and cold drinks." Between 1982 and 1997 hundreds of festive film soirees took place there. Anyone was welcome to put on a screening; no rental fee was charged for using the theater. Show organizers simply had to come up with films, audience, and help clean up the theater and courtyard after the show. Free cinema was at the core of the No Nothing's bill of rights and admission was never charged in over fifteen years of operation. SRO crowds jammed the little theater and then spilled out into the courtyard for intermissions or the occasional unbearable film. Beer was a dollar, barbeque and eats, pot luck.

The building which housed the No Nothing was formerly the Green Glen Dairy, a creamery and processing facility which vacated when a proposed freeway project was set to run right through the entire block.

After the creamery left, CalTrans purchased all the buildings on the north side of the block in preparation for the impending freeway. In 1976, a small contingent of filmmakers took their chances and moved in knowing they would likely be evicted within two years. But the freeway plan fell through and the filmmakers stayed, set up editing, recording, and production studios, built the theater and remained for the next twenty years.

No Nothing Cinema highlights included the vaguely annual "Help Keep Film Dead Show," a showcase of new experimental works by locals, wryly named in response to a local film critics assertion that "film was dead." Films were often accompanied by live musical soundtracks , sculptures, mechanical installations, or preceded by songs, plays, or performances by the filmmakers and occasionally their children.

In 1994 one of the No Nothing's founders Dean Snider died. A funeral procession led by a brass marching band started a block away at Happy Donuts on Third St. and ended back at the No Nothing where a wake followed.

After Snider's death, film shows took a hiatus for over a year and when screenings resumed the theater was informally redubbed the kNOw MOre Cinema.

As of June 1997 screenings were still taking place at the 30 Berry St. theater. Tenants feared they would be evicted "soon" to make room for a new downtown baseball stadium--that is, if the controversial stadium fares better than the truncated freeway which threatened years before.