NATIVE AMERICANS in the MISSION ECONOMY

Next Stop #3: Sailors and Shanghaiing 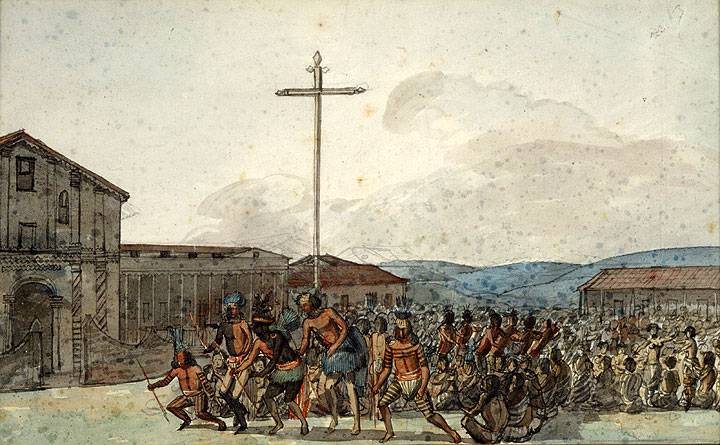 1820 painting of European view of supplicating Indians seeking absolution from local priests... meanwhile, it was the local Native Americans who were actually building the missions and producing the surplus that the padres were trading with passing ships.

Sept. 25, 1829--Slavery was abolished in the Mexican province of California. In 1830, the white population was only 4,000 in all of California. One report noted that in 1835 the Indians were satisfied to receive a fathom of black, red, and white glass beads for a season's work.

"With secularization came the legal emancipation of the neophytes; but the change proved most unfortunate in not a few respects. Many of the Indians continued to suffer the lot of serfs, being treated as such by ranchers and others who had work to be done. Moreover, they refused to work either under the padres or for them, insisting that they had been freed from all connections with the missions. The greater number of them wandered off and returned to their old ways of living. Frequently they took with them the horses, cattle, and sheep of the missions, and in other ways helped themselves freely to the padres' wealth and stores. Protest and supplication by the mission fathers were in vain. Their sixty years of patient effort and sacrifice in christianizng and in teaching the Indians the more rudimentary of the useful arts were as so much wasted labor." --History of the Labor Movement in California by Ira Cross (UC Press, Berkeley 1935, p. 8)

California Indians had no conception of history, so far as we know; nor, given their way of life, did they need one. Instead, they viewed time as cyclical. They were attuned to the rhythm of the seasons, and, due to the good fortune of geography, spent an average of only ten or fifteen hours a week hunting, fishing and gathering what they needed to eat and wear. The concept of "work" according to a clock or for wages was unknown to them. California's rich natural food resources--a readily accessible high protein diet of fresh fish, acorns, small game, various edible plants and roots--made a subsistence economy easy. Starvation was unknown. Unlike other Native American groups in the rest of north America, the original Californians had no need for agriculture, and only a few tribes in southern California practiced it.

Native Americans understood their economic relationship with nature as a harmonious give and take. As one California Indian woman said, "When we Indians kill meat we eat it all up. When we dig roots we make little holes. When we build houses we make little holes. When we burn grass for grasshoppers we don't ruin things. We shake down acorns and pine nuts. We don't chop down trees. We only use dead wood." It wasn't as if hard work was unknown to them: when the season demanded it, as with salmon runs, or migration of animals--they worked strenuously. But then they rested and played.

The Spanish missionaries, arriving in what they called "Alta California" in the late eighteenth century, brought a different conception of time and of the relationship between humans and nature. Their goal, in setting up a string of twenty one missions along the coast from San Diego to Santa Rosa, was to establish a military and religious basis for empire. For the Franciscan missionaries, the Native Americans, like nature itself, were there to serve the goals of God and Empire. The Spanish originally envisioned the process taking ten years, during which they would enroll the Indians in the church, teach them in the missions how to work in various occupations, and then release them into the new economy outside the missions as laborers.

Above all, the missionaries saw in the converted Indian population a workforce for the Church and the Spanish economy. By working the "neophytes," as they were called in the missions, 30 to 40 hours per week, they would create the basis for the missions' survival. The surplus (everything beyond what was needed for subsistence) could be traded and sold to build the wealth of the missions and Spain. It was assumed that the Native Americans--viewed as simple and childlike creatures--would eagerly embrace their place in the Spanish empire. 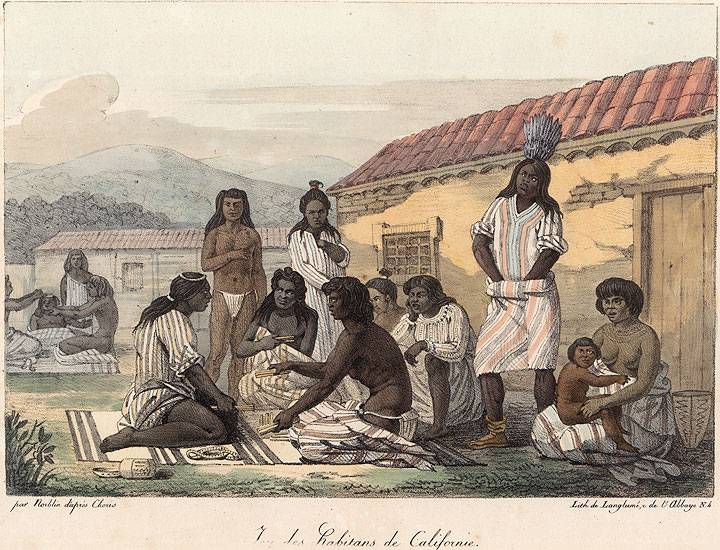 Understandably, the Indians were not quite so eager to participate in the Spanish plan as its principal architects, such as Padre Junipero Serra, imagined. While some were recruited through theatrical church ceremonies conducted in the villages by the Franciscans, most converts in the early years of the missions were forcibly captured by Spanish soldiers. Once inside the mission, the Native Americans were not allowed to leave. Typically, the Spanish did not consider this to be the same as imprisonment, since the mission system supposedly would be over with in a decade, by which time all the Indians would be converted and released. As a fur trapper observed, "The greater part of the Indians were brought from their native mountains against their own inclinations, and by compulsion, and then baptised; which act was as little voluntary on their part, as the former had been. After these preliminaries, they had been put to work, as converted Indians."

All Work Performed by Native Americans

All the work in the missions, according to both European observers and reports by the Native Americans themselves, was performed by the Indians. Getting them to adjust to working required strict regimentation and often harsh discipline. In contrast to their lives outside the mission, the missionized "neophyte" Native Americans lived in an atmosphere of repression and rigid intolerance, and the work they performed was forced labor.

Unlike slaves in the southern United States at the same time, Native Americans did not work twelve or fourteen hour days in the missions: they were not literally worked to death. But the strict regulation of the day by the padres, reinforced by punishments for breaking the rules, ran completely counter to the cultural traditions of the Native Americans, as did the separation of men and women into different living quarters. The Spanish structured their days into a rigid schedule announced by Church bells. The Native Americans had no conception of linear time; it made no sense to them to live or work that way. Consequently punishments for ignoring routine were frequent, and often severe. According to Julio Cesar, who years later recalled his life as a neophyte, "When I was a boy the treatment given to the Indians at the mission was not good at all. They did not pay us anything, but merely gave us food and a breechclout and blanket, the last renewed every year, besides flogging for any fault, however slight. We were at the mercy of the administrator, who ordered us to be flogged whenever and however he took notion."

Creation of a Surplus

By using Native American labor, the padres created surplus food supplies, which the missions traded with the presidios (military stockades) and with foreign ships for finished goods. But while the mission storerooms held grains, vegetables, dairy products, and fruit and wine, the neophytes were fed an absurdly inadequate mush made of oatmeal or cornmeal. Hunger and even starvation was often cited by runaways from the missions as their reason for escaping.

Malnutrition, coupled with punishments for infractions of rules they only barely understood, weakened the Native Americans' resistance to disease. In their traditional villages, the nomadic Indians would simply burn down their always-temporary homes and move nearby to establish new ones to deal with flea infestations or disease. In the missions, men and women, forced to live in permanent buildings, suffered from dirt, crowding and unsanitary conditions without recourse, which in turn facilitated the spread of European diseases, against which the Native Americans had no natural immunities.

These factors--forced labor, diet, disease, living conditions--all contributed to an very high death rate and equally low birth rate. In other words, mission life was the equivalent of a slow death sentence for the California Native American population, which, by 1834, when the missions closed their doors, had been reduced to about one third of its original size in 1769.

While work itself was not the immediate cause of the horrible population decline, the forced labor system of the missions could accurately be described as the underlying reason for the decimation of the Native Americans, since they were brought to the missions primarily to work. The diet, disease and living conditions that actually killed the mission Indians followed their transformation from subsistence hunter-gatherers into forced laborers creating a surplus for their Spanish masters. Unfortunately for the Native Americans--California's first working class--things were only to get worse in the coming years.