Originally published in The Semaphore #204, Fall-Winter 2013 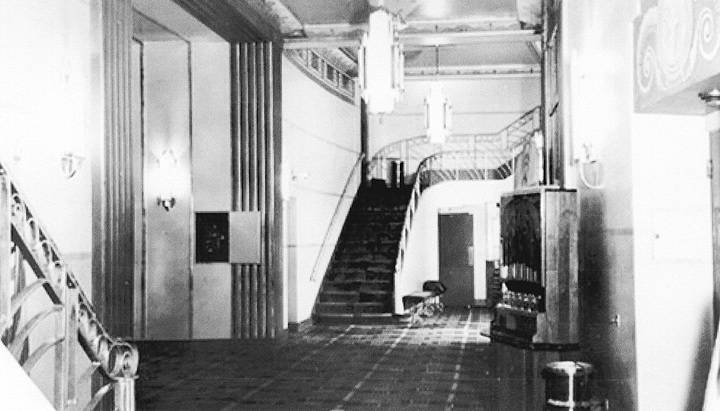 It was several weeks ago that I was enjoying another good lunch at Original Joe’s restaurant in North Beach with a dear friend of mine who was on vacation from Trieste, Italy; he had never been to the Bay Area before. We were seated at a window table that gave us an entire view of Washington Square. This was to be our last stop on an unusually sunny day that had been ideal for our extensive, personal riding and walking morning tour of San Francisco.

From our table, I was pointing out the various — luckily — still remaining structures encircling the square.  I nostalgically narrated the many amazing experiences I had encountered in this town after my family and I arrived as postwar refugees from Trieste in 1951 when I was 14 years old.

My lunch guest was admiring Saints Peter and Paul Church and the very charming buildings on the square that were erected after the disastrous earthquake and fire in 1906 destroyed about one third of the city, including all of North Beach with the exception of a few structures near the top of Telegraph Hill and a couple on Water Street at the shores of the then Beach of the North. He was disappointedly curious about the ugly structure on the west side of the square, but I managed to avoid that issue, because I was too embarrassed to explain to him about the ridiculously interminable and very frustrating reasons that caused the current conditions of that then boarded-up eyesore. 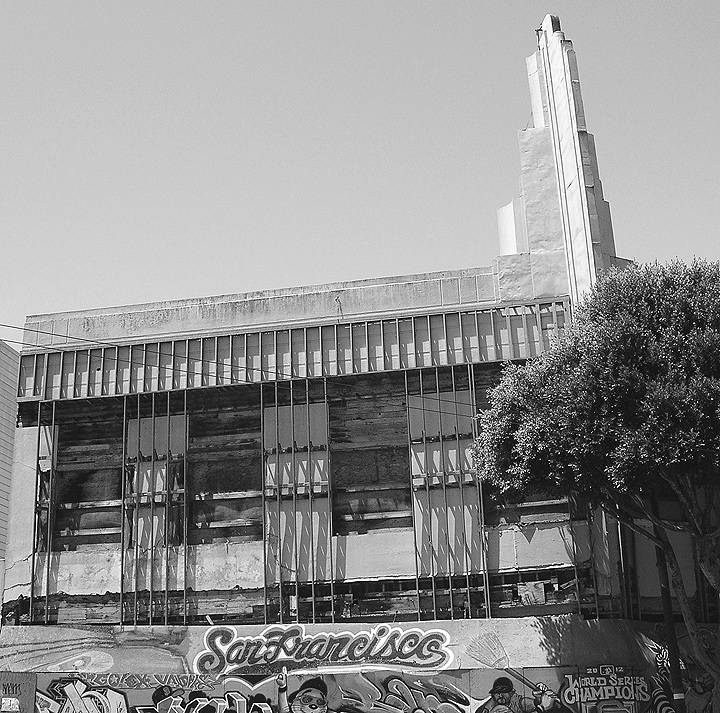 The Palace Theatre boarded up prior to demolition in 2013.

The very nice proprietors of Original Joe’s should have added a temporary rental fee to our check because we spent the entire afternoon at the table reminiscing about the times the two of us and many of our friends had spent in our early youth in Trieste; and I told him at length about the lifestyles of the inhabitants of “Little Italy,” when practically all of the population of North Beach was Italian. Many of its inhabitants were of second- or even third-generation Italian descent and some were new immigrants from that distant world of Italy, who migrated here after World War II such as my family and me.

Before we left Trieste, my poor family could not afford to buy tickets for the movies in that city, but I managed to occasionally see some films, mostly American, in the basement of our parish church.  They were projected on a small, naked white wall, but instead of being subtitled in Italian, they were expertly dubbed by truly talented vocal craftsmen. I got to see the acting performances of several famous stars from America that I naively thought were bilingual to the point that even the uniquely voiced superstar, the very famous Spen-cher Traah-chee (Italian phonetic for Spencer Tracy), spoke my native language fluently.

The movies were frequently shown on Sunday afternoons and without charge.  However, the much anticipated spectacles were always preceded by mandatory catechism classes that my friends and I had to attend. It seemed to me that they always lasted longer than the movie itself.  After four years of that semi-delightful penance in the basement of that church in Trieste, you can imagine my astonishment, when I went to the movies for the first time at the Palace Theater in 1952, conveniently located right around the corner from our home on Scotland Street in the heart of North Beach.

Once settled in that apartment, there was no way of not noticing the beautiful building illuminated by prominent signs in front that said “Palace.”  I could hardly wait until I eventually got to go there for the first time. I could have never imagined then that the wonderful experience was going to be repeated hundreds of more times over many subsequent years.

My theatrical marathon started at the ticket booth.  Because I barely spoke a word of English, I did not understand the questions that the attractive young lady inside that lovely box was asking me until she patiently pointed to the posted sign that listed the three categories of prices. I meekly purchased the least expensive ticket.

Entering the ornate doors, I was awed by the exotically appointed lobby before a well-uniformed attendant escorted me, using a little flashlight, to a seat for the beginning of the full length film; it was to be the very first film I got to see in America, a classic mystery directed by the incomparable Alfred Hitchcock and it was called Strangers on a Train.  The supporting actor in that reel was named something that sounded, at least to me, like Ghaai (Guy, phonetically), while the leading role was performed by another actor named — are you ready for this — Bruno; incredulously, I needed no dubbing for that particular word!

In the fall of that year I was to be enrolled at Galileo High School. Without having made any local friends yet, I was sure that going to the movies would be most likely a good way of starting the process of learning the English language as soon as possible.  I had hoped that by very quietly vocalizing the dialogues of the protagonists and, at the same time, trying to mimic their spoken words by contorting my mouth accordingly, I would perhaps familiarize myself with the lingo even faster.

After those exhausting concentrations, I took a breather during the short and totally inconsequential film clip that followed.  The newsreel was next and it mostly covered the tragedies that were occurring in the Korean conflict. Those terrifying bits of news created a somber pall, but not for long, because the mood was instantly changed as the bright houselights came on and it seemed as if a stampede was in progress because most of the audience was rushing to the lobby.  I remained in my seat, fearful that it would be occupied by someone else, but the call of nature, because I had been sitting there for at least three hours, took precedence. That 15-minute break allowed the audience in the lobby ample time to decide what kind of refreshment they could buy at the very well-stocked candy bar.

Upon my return from the large and clean bathroom, the lobby was full of happy people gnashing on all sorts of goodies. To my astonishment, many of them were walking around with cartons overflowing with pale-yellow puffy things that had just been doused by the candy-girls with generous drizzles of some kind of oily liquid. Judging by the pungent aroma that permeated the theater, I assumed that the secret ingredient of that delight must have been some kind of burnt butter, or margarine.  Something, I though most likely to be sugar – as the cartons came from the candy bar, after all - was sprinkled on tops of the puffs that were precariously stacked in large, cheerfully decorated paper containers.  I later discovered the granules were salt.

After that welcome break, the lights in the lobby were dimmed for an announcement about the other half of the long afternoon.  Once again, the several courteous ushers escorted the audience back to its seats and I tried to sidestep the popcorn that was spilling all over the place and which no one picked up. To me, it appeared to be another classic example of the American abbondanza. 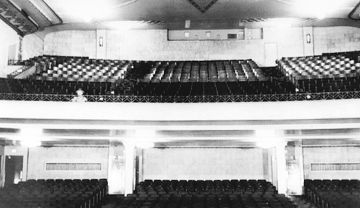 The audience was further entertained by one or two of Walt Disney’s whimsically endearing cartoons.  A few more minutes were dedicated to the projection of brief previews of the next two films that were going to be screened the following week at the theater. Finally, the last movie, usually the more popular of the two, began. It must have been chosen for the entertainment of the many, and noisy, children on summer vacation.  I wondered what could have possibly been so hilarious, because all the kids and, amazingly, even some of the adults, were rolling in their seats with uncontrollable laughter.

The very surprising second feature was truly stupefying because the main character of that film was a loquacious pack-animal that shared the lead with a very energetic actor, who not only talked back to the beast, but also sang and danced around the apparent superstar, “Francis, the Talking Mule.”  I was totally flabbergasted at that amazing novelty, and somewhat frustrated by the fact that I was not able to contort my mouth in order to imitate the words that came out of the mouth of that prodigious half-horse.

Needless to say, I was astonished at the whole experience because I had never been inside any movie theaters in Trieste, either before or after the war in Europe. By the time I came out of that theater, I had been in there for almost five hours, and I had bought all of that entertainment for less than 50 cents, without the catechism!

The day after the lunch with my Triestino friend at Joe’s, while on my usual stroll through Washington Square, a miracle was — ironically — happening on the corner of Columbus Avenue and Powell Street.  The unsightly high-security boards, plastered with offensive messy graffiti that had covered the front of the theater for what seemed like forever, had been removed by a demolition team.

I could hardly wait until I went back the next day and witnessed the beginning-of-the-end of what had been a wonderful entertainment venue for me for so many years.  The lovely ticket booth had already been destroyed and next to come down were the walls that housed the lobby as well as the projection rooms that were above it. Now that my memory had been resuscitated, I kept going back on a daily a basis to the rubble in order to witness the progressive demise of the cinema. The first of many memories that came to mind, is the one about the last row of seats – a k a the bleachers — that were situated right below the strobe light that came from the projection room.  There, my then-girlfriend and I spent many, many exciting hours close together, not always watching what was on the screen.  I remember that I tolerated the pains in my ribs that were caused by the armrests that separated our two seats.  I should also mention that, beside the discreet little kisses I was occasionally allowed to treasure, all other attempts on my part for further expressing my passion were definitely a no-no. So my very zealous affection toward the young lady was rewarded by a few souvenir smudges of indelible lipstick imprinted on my shirt collars.

With that in my mind, for me, there will never be a final farewell to the Palace Theater!

Bruno Viscovi has been living with his wife Rae in the Marina district of San Francisco for more than 40 years. He retired in 2008 from his restaurant career that started as an assistant-dishwasher at New Joe’s Restaurant on Broadway in 1952. In 1988, Bruno founded Albona Restaurant, located on Francisco Street between North Beach and Fisherman’s Wharf. His former long-time chef, Samuel Hernandez, is the new owner and is successfully continuing the legacy of cooking and serving the distinctive food of the cuisine of Bruno’s native citadel of Albona, on the east coast of the Adriatic peninsula of Istria.