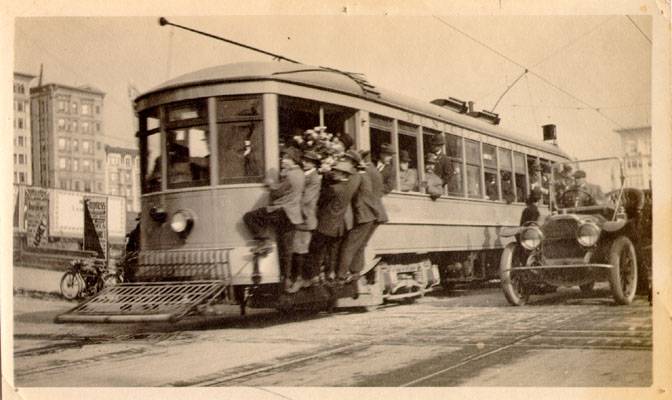 The Municipal Railway commissioned Muni Car No. 1 and 42 identical streetcars from manufacturer W.L. Holman for the first Municipal Railway line on Geary St. Although the Holman Company only completed 10 cars by opening day, Mayor James Rolph took the controls of the Municipal Railway's first streetcar for its inaugural service on December 28, 1912.1 This first demonstration of Car No. 1 to adoring citizens with a San Francisco Mayor at the helm would be the first of many similar occasions, as this streetcar would become an iconic testament to the first major municipally owned railway in the United States.

Bion J. Arnold, a nationally recognized transit consultant and electrical engineer, designed the first 43 streetcars for the Municipal Railway.2 These "Arnold" or "A-type" cars had partly enclosed seating areas, creating a variant on the popular "California" streetcar design, which had open and enclosed seating.3 The semi-open end sections of the cars acted as a smoking area for passengers and did not have windows when first built. However, the occasionally cold and foggy weather prompted Muni to add windows to these end sections.4 These first streetcars were thinner than later streetcars, which forced the seating in the cars to have a long bench, or longitudinal seating, on one-side of the car while the other side had traditional forward facing seats.5 However, the narrower width of the cars also allowed for easy maneuverability on narrow streets, thereby keeping these "A-type" streetcars in service for many years on various Muni lines where other streetcars had difficulty performing.6

Historic Streetcars, Tourism, and the Creation of Nostalgia

Through an increasing number of public displays, the city uses Car No. 1 and other historic trolleys to promote the city's largest industry, tourism. This strategy began in the early 1980s when Muni took the famous cable cars of San Francisco out of service for a complete system reconstruction. With a major tourist attraction out of commission, Mayor Diane Feinstein, the San Francisco Chamber of Commerce, the Municipal Railway, and the non-profit organization of Market Street Railway teamed up to create the San Francisco Historic Trolley Festival. These festivals operated during the summer months starting in 1983 and continuing through 1987. Using historic streetcars from around the world, including Muni Car No. 1 and Mayor Feinstein at its controls, the festivals paraded the historic streetcars on the recently unused surface tracks on Market Street.11 From these experimental summer Trolley Festivals, Muni decided to open what is now the current Muni F-Market line in 1995for additional service on Market St and a connection to Fisherman's Wharf and the restored cable cars via the Embarcadero.12 Car No. 1 would serve on the F-Market line and its extension for over a decade before Muni removed it from service for a complete restoration.13

Although used for many previous celebrations in the city, Muni and the city did not fully realize the possible exploitation of historic streetcars like Car No. 1 for tourism until the Trolley Festivals. Using restoration of nostalgic areas, such as Ghirardelli Square, the Del Monte Cannery, and the San Francisco waterfront, San Francisco was able to boost its tourism industry and obtain commercial revitalization in those areas.14 With the growing tourism industry and Car No. 1's participation in the highly successful Trolley Festival, the city used Car No. 1on the new F-Market line to further boost its tourism appeal while showcasing part of the city's history and the history of streetcars from around the world. With historic streetcars in San Francisco returning to scenic backdrops, such as the San Francisco Bay, the historic streetcars may also attract citizens and tourists with nostalgia of old picturesque postcards. The use of postcards peaked around the same time the electric streetcar was most developed, and postcards of old downtowns often included scenes with streetcars.15 As San Francisco restores various districts, like the waterfront, to more historic scenes to bolster tourism, they also use the historic streetcars to add to the nostalgic atmosphere.

After Car No.1's complete restoration, the city brought the car back to San Francisco for testing and limited service.16 However, Car No. 1 was back in the spotlight for Muni's centennial celebration a few years later. During the celebrations in 2012, the 100-year-old streetcar held dignitaries such as Senator Dianne Feinstein and Mayor Ed Lee. The city gave additional praise to Car No. 1 with the streetcar being featured on the official Muni centennial logo.17 Currently, Muni has set Car No. 1 aside for use only during special occasions and does not have the streetcar run regular service on any of its lines. However, with the $1.8 million facelift Car No. 1 received in 2009, we can expect to see Car No. 1 continue service well into the next 100 years.18