The Train to Muir Woods

Putting Your Life in the Hands of the “Gravity Man”

Despite modern roads and methods of transportation, Muir Woods can still present challenges to those who want to visit it (and we won’t bring up the issue of trying to park there on a sunny weekend afternoon). Though only about 10 miles as the raven flies from downtown San Francisco, getting to Muir Woods requires a dizzying car or bus ride down a series of switchbacks, or a strenuous hike. But once, visitors could take a railroad car to what was then the main entrance beyond Cathedral Grove, Redwood Canyon’s back door. How was that possible?

Railroads were the darlings of the Industrial Revolution. After 1869, people could travel cross-country by rail in less than a week, rendering unnecessary the treacherous maritime journey around Cape Horn or across the Isthmus of Panama. Travelers from the East Coast and Midwest no longer needed to visit Europe to see great mountains and glorious landscapes — opportunities for leisure travel now pointed west, along parallel iron rails. Wealthy travelers demanded the very finest accommodations, and the success of the first great national parks, including Yellowstone and Grand Canyon, was immeasurably aided by the early investment and influence of the Northern Pacific and Santa Fe Railroads, respectively. 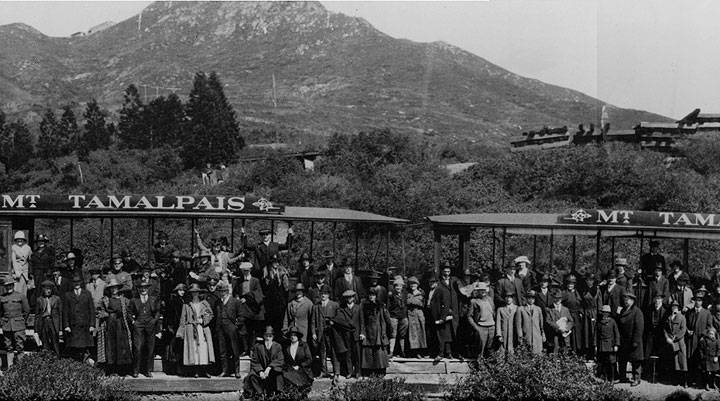 The development of the Mill Valley—Mt. Tamalpais Mountain Railway (later known as the Mt. Tamalpais—Muir Woods Scenic Railway) in 1896 can best be described as following the principle, “If you build it, they will come.” William Kent and others had visions of bringing travelers to Mill Valley as well as preserving Mt. Tamalpais as a national park, and his purchase of Redwood Canyon and adjacent property in 1905 was the initial step in this plan.

Originally, he intended to build a hotel and then lease it to the railroad, which would in turn build a spur down to Redwood Canyon, home of the old growth redwood forest known today as Muir Woods. Yet, following the 1906 earthquake, when Redwood Canyon was threatened with condemnation so it could be dammed, Mr. Kent instead sold the property intended for the hotel to the railroad and gave the land with the forest to the United States.

NOT FOR THE FAINT OF HEART

The railroad completed the spur to Redwood Canyon and the first Muir Inn (at what is now Camp Alice Eastwood) in 1907. The Crookedest Railroad in the World, which ran from Mill Valley to the top of Mt. Tamalpais and the Summit Tavern, was considered to be an engineering marvel, and was quickly successful. From Mill Valley to the tavern, the maximum grade was 7 percent, and averaged 5 percent. Passengers traveled 8.25 miles and negotiated 281 curves that, when placed back-to-back, created 42 complete circles—all at what was considered the hair-raising speed of 8.5 mph!

The Gravity Car was advertised as a ride “not for the faint at heart!” Each small, open, four-wheeled “self-propelled” car was controlled by a Gravity Man, who used two independent brakes to maintain the car at the blazing speed of 12 miles per hour, a speed calculated by listening for two clicks on the rails every two seconds. After traveling through the famous Double Bow Knot above Mesa Station, passengers glided down to the Muir Inn, where, as in other national parks, they enjoyed the high-quality accommodations. From there, they traveled down the old stage road (now the Alice Eastwood Trail) into majestic Muir Woods. Even John Muir is reported to have ridden the Gravity Car at least once for an excursion to “his” woods.

ECHOES OF THE PAST

We now consider railroads a romantic piece of history. Though the train whistles of the Mountain Railway have been silent for 75 years, the grade from the summit of Mt. Tamalpais down to Muir Woods still exists. Walk the grade, close your eyes, and imagine the excitement these early travelers experienced as they entered through Muir Woods through the “back door.”

--The original article was published in the September, October, November 2005 issue of the ParkNews, The Quarterly Magazine of the National Parks at the Golden Gate. It is printed here with permission.