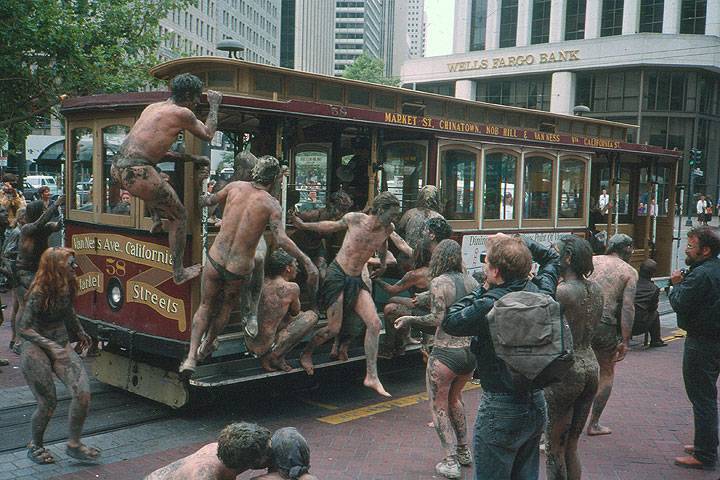 From 1986 to the late 1990s, a strange social phenomenon has occurred annually in the S.F. financial district: a bizarre, modern tribe calling themselves the Mud People has gathered downtown to indulge in an annual ritual of muck and mirth. During the noontime hour a loose group of 50-100 people strip off their clothes, cover themselves in mud, and proceed to cavort and crawl through crowds comprised mostly of lunching financial district workers. The contrast is stark and galvanizing as passersby seem attracted, repulsed, bemused, and often befuddled by a curious mixture of these and other conflicting responses. Whatever the reasons, there are many moments during the hour-long parade when several hundred people completely stop what they are doing and congregate to interact with or, at least, gawk at the entirely weird beings. 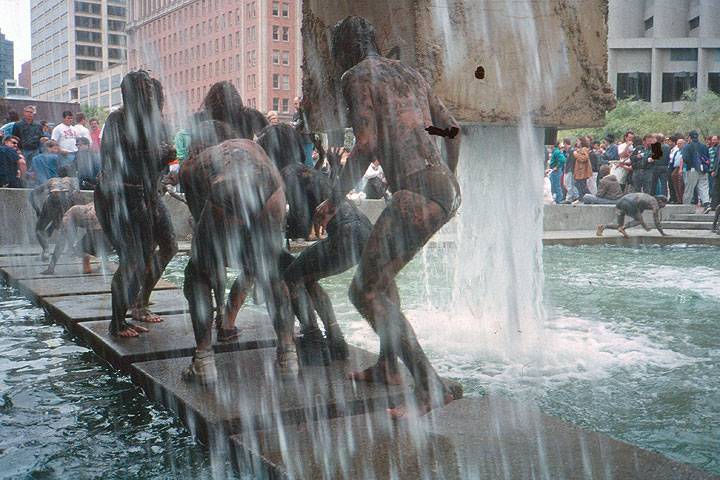 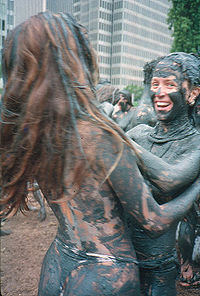 It is a thoroughly unique cultural collision within a psychogeography that incorporates business suits, high speed time management, concrete, steel, skyscrapers, and the repression of the erotic --- popularly known as modern urban civilization. For the Mud People this alien world is an utterly incomprehensible madness. They attempt to navigate this baffling terrain by following three basic rules: 1) cover your body in mud 2) never use human language and 3) no normal, upright walking. Everything and anything else goes! It is startling how following those three basic rules can illuminate the narrow social rules we normally accept as possible. It is a striking cultural experiment when 50 or more citizens choose to stop all talking, cover themselves in mud, and then crawl, slither, shriek, moan, laugh, and romp through noontime downtown S.F. Besides being a lot of fun, it poses questions about how we as a culture define sanity, progress, and a host of similar notions.

In the idea of the post-literate, mud tribe invasions/processions, you can see how two of the most contrasting set of public behaviors are forced to rub up against each. Many observers ask, "Exactly what statement is the Mud People trying to make?" Let me assure you this is impossible to answer since we can't talk. Anthropologists and other outside observers, however, have a wide variety of speculations about the Mud People. 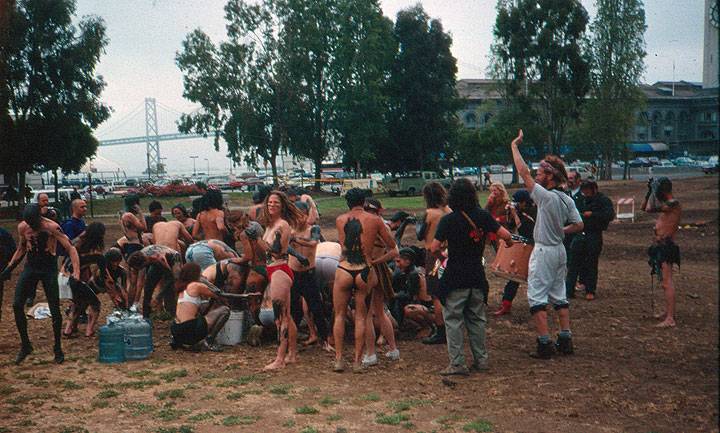 One placid executive, smoking a cigar and wearing an expensive Armani suit, remarked, "No doubt about it! They are making a statement about back problems. This is consciousness raising about lower back problems." An extinguished anthropologist on tour from France, Michel Foucault, was intrigued by the back problems theory and mused, "This theory is the precise metaphor of the institutionalization of naked power relations inherent between those that crouch and crawl and the dominant overculture of hurried, upright walkers." A spokesperson for Earth First! angrily regarded such theorizing as "Complete hogwash, this is about putting your body on the line. It is a direct action protest shrieking 'Earth First, Earth First' over and over until that is the only sound that be heard." Greenpeace disagreed with this but thought, "It's a real cool media event." A Sierra Club representative said, "Really it's about bringing the primal and corporate worlds into harmony. The Sierra Club is excited about the prospect of joining Chevron Corp. and Bank of America as sponsors for the Mud People in the future."

Several independent and spontaneous art critics see the Mud People quite differently. One stated, "It is a grand spectacle using post-modern performance techniques to cause a public disruption that cracks open the numbing, everyday petrification of today's strangled social life." 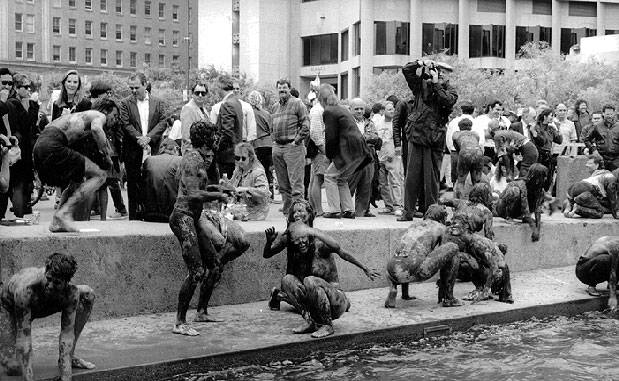 Another critic quipped, "It is public performance that drinks deeply from the well of Brecht and The Living Theatre. This is contemporary protest theatre dissolving the divisions between stage and audience, art and politics, fantasy and reality, modern corporate life and a life based in eros." Robert Redford of the Sundance Film Festival watched the Mud People video and was amazed at its "potential to stimulate a new film movement that isn't market driven. To me, they are in rehearsal for an experimental film sequel to The Return of the Planet of the Apes. A new film approach that truly promotes a renewed primal, earth-based, non-monetary, community sensibility. I see it as immensely popular and profitable. It will shake up the entire industry. Sundance would dedicate all profits to a joint fund with Working Assets, Ben and Jerry's, and others. The sole purpose of this fund would be to abolish the market driven, global monetary system." 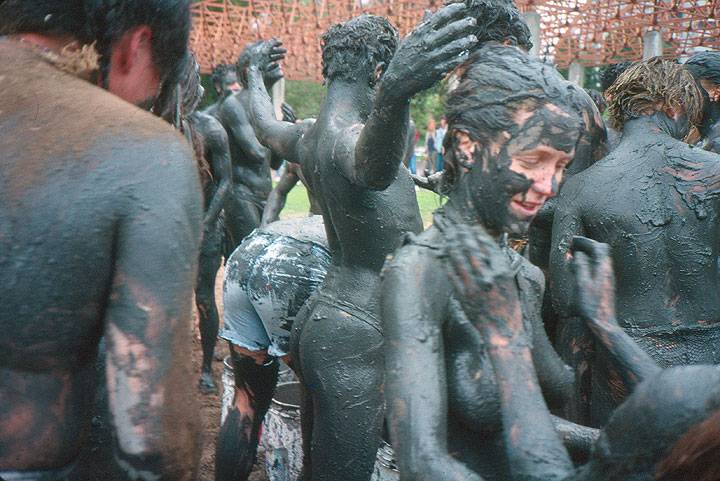 Getting the mud on...

Other speculations about the Mud People are less grandiose. One middle aged man commented, "I've been very lucky. I work across the street on the 7th floor and the last four years I've been lucky enough to look out the window and see them each time during their annual mud day. I immediately leave the office and come down to take it in. For me, there is no one meaning for what they are doing. It is a protest about the insanity of how we work and live; it is a way to have fun and get very primal and sensual; it is one of the few opportunities to have some kind of modern tribal experience; it is a wacky performance celebrating eros; it is a beautiful ritual." . . . It is all that and not that at all. For better or worse, it is something I look forward to. For me it provides a catharsis I need.

Advertisement for a Mud People Event in July 1989. 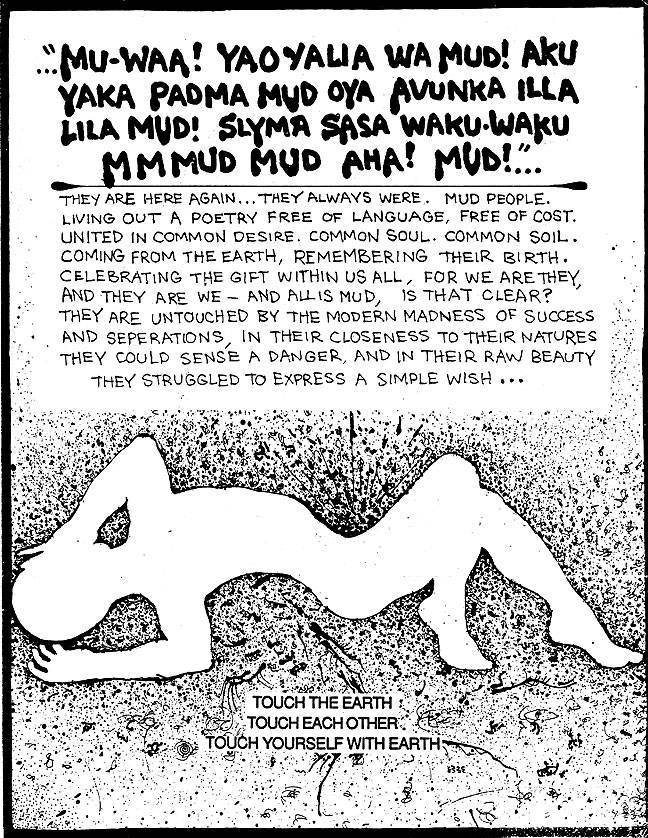 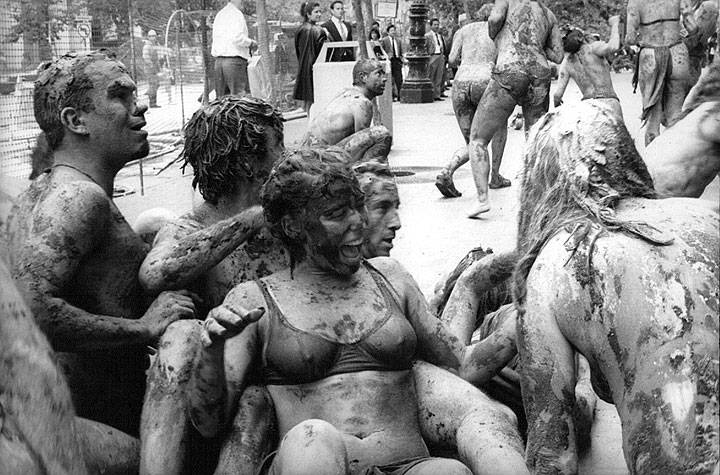