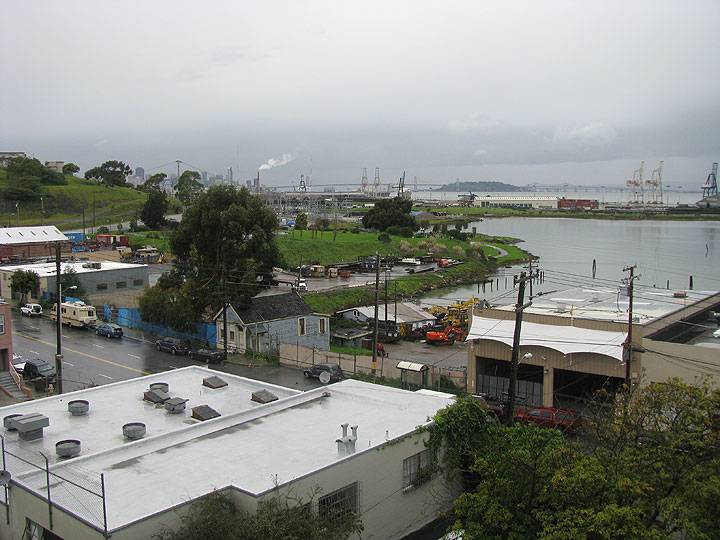 
It is our understanding after consultation with the State Division of Highways that the two alternate Routes, “B” and “C” of the Hunter’s Point Expressway will cut through the property of the S.F. Mountain Springs Water Company and that construction work will be carried on so close to the springs of the company that they will most likely dry up and be useless. This is the opinion of the Highway Department’s geologists.

Mountain Springs Water Company has been serving spring water to the people of San Francisco since late in 1913, nearly fifty years. It is a family-owned business and now has a third generation active in its management. It would, of course, be disastrous to the company to be deprived of its source of spring water.

Today Mountain Springs Water Company gets its water from springs on its property at 895 Innes Avenue, San Francisco. These springs are buried deep under fifty-odd feet of solid rock in tunnels built in the 1870s by the old Burnell Brewery. They flow constantly with little, if any, varieties and supply approximately 20,000 gallons of pure spring water each day. In addition, Mountain Springs Water Company has built dams in the tunnels which hold back approximately 100,000 gallons of water which can be drawn upon. In case of emergency facilities have been constructed underground to bottle water without power.

Mountain Springs Water Company takes the position that it would be most unwise and decidedly not in the public interest to destroy a natural resource which in case of a nuclear or other type of disaster could be relied upon to supply enough pure water to keep alive 80,000 San Franciscans.

We are constantly reminded of the danger of a nuclear war and of the plans for destruction of our cities. How can we so flagrantly ignore these warnings and authorized the destruction of a means of survival provided by Nature for the citizens of our community?

We are told that in the case of a nuclear holocaust our public water supply would be contaminated and unusuable. Is it wise then, to destroy a natural source of water that could supply the water needs of 80,000 survivors? And what for? A road that would be unusable as an escape?

How important is it that a freeway be placed on a particular route? Is there no other place to put it? We think there is. The Highway Dept. has provided ONE route that would preserve these springs. It is the “A” route and we are told it will be the least expensive, save the users in the next twenty years the most money ($43,400,000) and has the highest benefit ratio. We strongly endorse this route which will preserve this natural water resource so vital to our community. 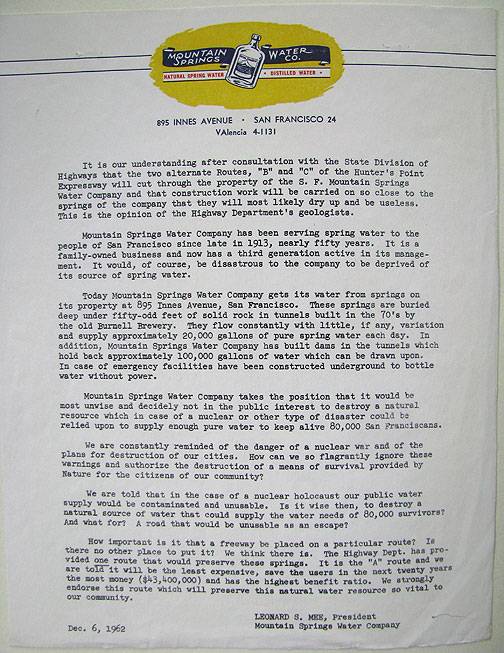 The letter whose text is above.