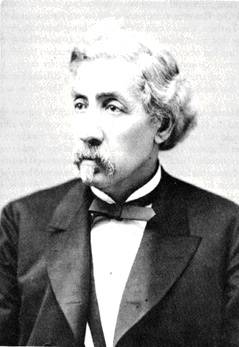 Salmi Morse (1826-1884) was born in Germany to Jewish parents who named their second son Samuel Moss. ("Salmi Morse" seems to have been an invention of his later life). He went to school in Germany and England, moving to work in his older brother Lewis' clothing and dry goods store in New York in his late teens. When Mr. Morse was 22, he and his brother headed for California almost at the first word of the gold strike. He does not seem to have fared well (he claimed to have lost all of his possessions in an 1851 fire, as he headed for Australia at the first word of a gold strike there in 1851. He apparently avoided the work of gold mining itself, instead managing Melbourne's Criterion Hotel, where, in 1853, he introduced the "innovation" of American bartenders who liked the traditional image of Uncle Sam, right down to the long white pointed beard. The hotel also had a vaudeville theater with a capacity of about 500 people.2 This may be where Mr. Morse first got interested in theater, for he showed no sign of a literary or producing bent earlier in his life.

Amidst scandal and rumor, Mr. Morse decamped abruptly, this time ending up half-way around the globe, where he claimed to have served with the British army in the Crimean War. His future wife, Harriet Jay Elliot, however, claimed that the closest he got to the war was being a clerk for her father in a shop in Constantinople. After a short period in England, Mr. Morse returned to San Francisco in early autumn of 1858. He bought a ranch in Mendocino County, returning to San Francisco in July of 1859 to marry Harriet in a ceremony at a Methodist church (which, if not necessarily showing a conversion from Judaism, at least indicates a certain lack of faith). The couple lived on the ranch for about five years. His ability as a rancher is not clear, but he had certainly developed a penchant for writing. The editor of the Petaluma Argus described Mr. Morse as "a unionist of the most radical type." He often cited the constitution in his arguments against slavery and in favor of maintaining the union.

In 1864 he moved back to a rather changed San Francisco. Although the city was still noticeably less constrained than many east coast cities, it had changed considerably from its early rough adolescence. Ownership of real property was even more concentrated (less than five percent of the "male work force" owned some 75-80% of the city), and the gentry had become more weighted with merchants from New England. They clashed—obviously—over prices and working conditions, but also over religion, for a large percentage of the city's workers were not Protestant (Italians, Irish and Germans being Catholic, the Chinese being Buddhists/animists). The 1870s were a period of recession for the country as a whole (actually it was called the "Great Depression" until 1929), and San Francisco's labor force, which had seen the nation's first 8-hour work day, had been battered by recession and waves of new workers brought by train (and imported from overseas by brokers). The discontent fomented by Denis Kearney reflected these changing conditions. In any event, Mr. Morse did not long remain in the city, heading for Santo Domingo in 1868.

Although the truth is hard to distinguish from Morse's fiction, he may originally have gone as part of a survey of the island backed by a consortium with ties to the Grant administration. The ultimate goal seems to have been the annexation of Santo Domingo, but nothing came of it, and Salmi Morse stayed on the island of Hispaniola for seven years, during which time his relationship with his wife became increasingly strained as she dealt with threats from revolts and poor conditions. As she put it in retrospect, "he always was a crank."(4)

In 1879, word came that a broker was interested in purchasing the ranch. He and Harriet then moved back to San Francisco, where Mr. Morse used the proceeds (some $12,000) to maintain the appearance of a man of independent wealth. He was also known for his elaborate, indeed, incredible, tales of his adventures.

In 1877 he met James A. Herne, an actor who was working as stage manager for the Baldwin Theater, which was owned by Elias J. "Lucky" Baldwin, a gambler who had made his fortune in the Comstock silver rush. Herne's assistant was David Belasco (famous early actor here and in New York), and Tom Maguire (famous early theater manager) managed the theater as a whole. Salmi then teamed up with two others to produce a futuristic drama, "Anno Domini 1900." This play was a virtual blueprint for his later endeavors, folding before it opened for lack of money and sensible guidance. In 1879 he achieved notoriety with his "The Passion."