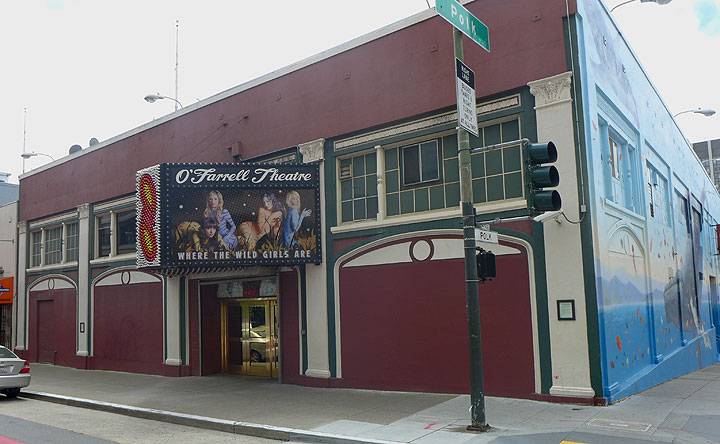 Mitchell Brothers' O'Farrell Theater, 895 O'Farrell. Hunter S. Thompson called it the Carnegie Hall of public sex in America. A parade of SFPD vice squad officers raided it and re-raided it dozens of times but couldn't shut it down. The Mitchell Brothers' O'Farrell Theater, founded by a couple of okie siblings from Concord, even survived one of the most celebrated crimes of the '90's: the murder of Artie Mitchell at the hands of his big brother Jim.

The Mitchells got their start at the San Francisco State University film department in the '60's. But the kind of films they liked making earned them a whole lot more than college credits. Soon they rented a warehouse on Potrero Hill at 20th and Tennessee Streets and turned it into a sound stage. On July 4th, 1969, they opened their famous O'Farrell Street theater. The SFPD responded by launching raid after raid, but, despite pouring vast sums of the taxpayers' money into prosecutions, the DA's office couldn't seem to get a conviction.

In 1972 the Mitchells risked everything they had on their first feature film, Behind the Green Door, whose massive $60,000 budget and resultant production values were unheard of in the porn industry. Just before the film was due for release, they got a call from the star, Marilyn Chambers, who informed them that her pure, innocent face would soon be adorning Ivory soap boxes across the nation. The resulting publicity made Green Door a box-office smash. The film made the brothers rich enough to fight off the prosecutions that had been bankrupting them. After a series of victories in the courts, the brothers operated with little harassment through the rest of the 1970's.

But in 1980, San Francisco, like the nation, suffered a right wing takeover. The liberal mayor George Moscone was shot; his replacement, Dianne Feinstein, was a police groupie who liked to dress up as a hooker and hang around Tenderloin district street corners to keep an eye on how her pets on the vice squad were doing. Feinstein sicced her vice-squad goons on the O'Farrell theater on July 9th, 1980. Fifteen cops under Lt. Diarmuid Philpott arrested 14 customers, 6 performers, and 7 employees. They seized a .45 caliber submachine gun, two rifles, a sawed-off shotgun, two pistols, a leather sap, lead-filled sap gloves, brass knuckles, a police baton, $3,000 in cash, a bag of marijuana, and an unidentified white powdery substance which subsequently disappeared from the police evidence room (presumably into the officers' nostrils.) Among the customers arrested were two men in their 70's.

The Mitchell Brothers' saga came to a bizarre and tragic end on February 27th, 1991, when nice boy Jim stormed into bad boy Artie's house at 23 Mohawk in Corte Madera and pumped three .22 caliber bullets into his allegedly out-of-control brother. After a long, heavily-publicized trial, Jim Mitchell was acquitted of first and second degree murder, convicted of voluntary manslaughter, and sentenced to six years in prison. As of April, 1994, Mitchell was still free on $500,000 bail as his lawyers appealed the sentence. (Mitchell's lawyers claim that the prosecution's computerized cartoon re-enactment of the murder was junk science.)