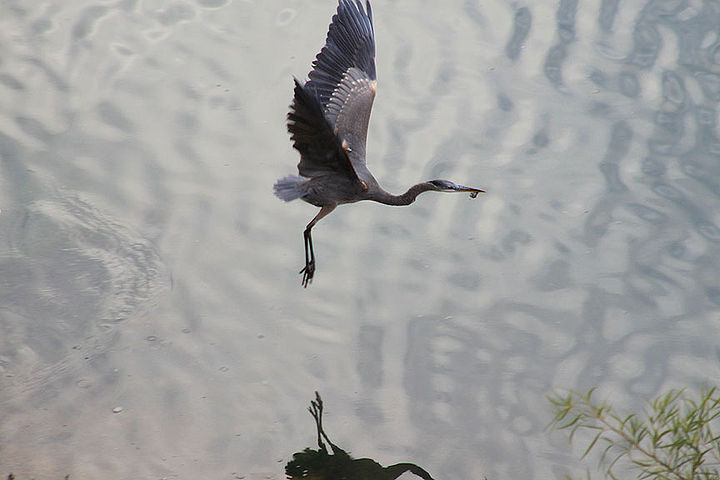 Great Blue Heron coming in for a landing at Mission Creek.

The tidal channel remnant of the once bounteous Mission Bay has long been sorely abused through human activity. Even after the 20 acre dump became so foul that it was abandoned in 1895, industrial and wood debris continued to be spewed into the waters. Docked World War II Naval ships spilled and dumped heavy bunker oil that still seeps up in small quantities in low tides. Underground fuel storage tanks, common in an era of rationing, were left to crumble. Local residents remember the Friday afternoon “white outs” as a local paint factory cleaned out its tanks. Until the Mission Bay development began in the 1990s, the neglected creek was still treated as a dump for sewage overflows in heavy rainstorms, and relegated to a dusty coexistence with truck trailers and homeless under the 280 freeway.

Fortunately reclassified as an “amenity” in more ecologically aware times, Mission Creek has survived the many decades of mistreatment to resurrect itself into an increasingly vital world of wildlife. Water quality has vastly improved. The City has reduced combined sewage overflows from over thirty a year to about three and the effluent is now almost all rainwater. And with the encouragement and stewardship of residents on both sides of the creek. Habitat enhancement work by Catellus and the Mission Creek Conservancy has reclothed the banks with Pickleweed (salicornia), Saltgrass, Sea Lavender, Jaumea, Alkalai Heath and the yellow-flowered Grindelia. Native and butterfly nectar and larval food plantings by the houseboat residents attract the buzzing of bees and flutter of West Coast Ladies, Red Admirals, Anise Swallowtails and Fiery Skippers. As the health of the tidal creek waters increases, a greater diversity of wildlife is making itself evident. The number of bird species has risen to 85, among them the rare Palm Warbler, attracting the serious scope-carrying birders. Favorites include the charismatic and patiently stalking Black-crowned Night Heron, Great Egret and Great Blue Heron. The more acrobatic Snowy Egret nudges small creatures out of the shallows with its yellow feet. Three species of cormorants dive for fish or hang open their wings to dry. A Spotted Sandpiper or small flocks of Least Sandpipers pick the mud and rocks for tasty treats and the piercing call of the Killdeer accents the night. 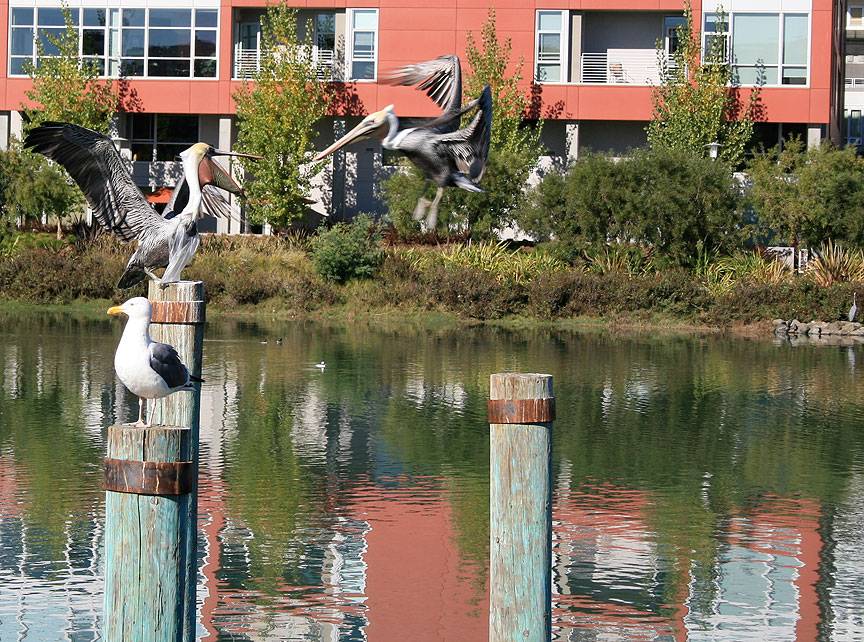 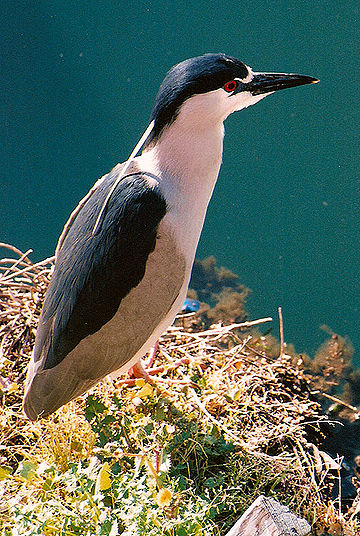 The creek is a bird nursery in the spring. Belted Kingfishers nest in a hole in the bank and Anna’s Hummingbirds raise their young in tiny moss-lined nests in the conifers. Bushtits weave nests that look like old socks hung out to dry. Western Gulls raise their broods on roofs of houseboats or warehouses or old pilings. The Mockingbirds, Robins and House Finches use the more traditional nest-in-a-tree approach.

But it is the presence of schools of Herring, Sardines, Anchovy and Shiner Surfperch that attract the action. When the schools are abundant, the creek becomes a feeding frenzy of Sea Lions, dive-bombing Brown Pelicans and squadrons of Double-crested Cormorants. Forster’s and Caspian terns foraging for their young precipitously drop out of the sky to snag a fish. Winter brings a new cast of waterfowl characters including the striking Bufflehead, Common Goldeneye and mussel-eating Scaup, as well as seven species of grebes and loons. 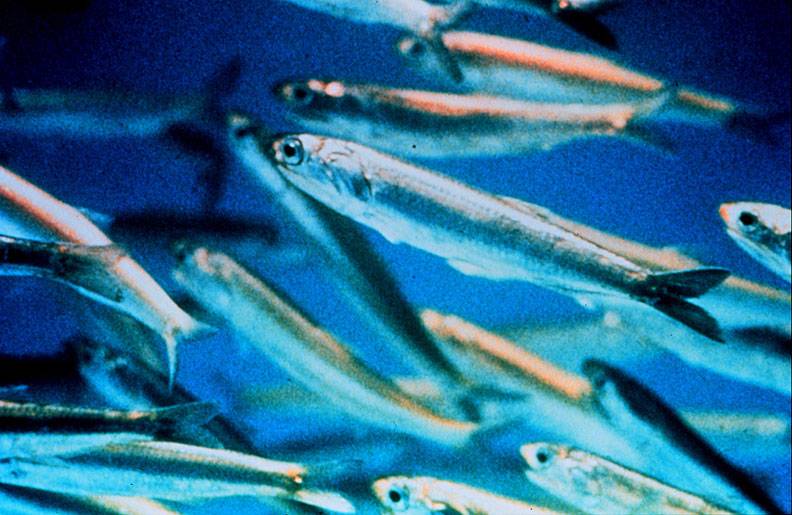 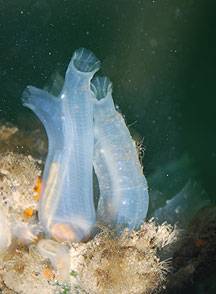 Supporting the fish is a rich tapestry of seaweed and invertebrates on the rocks, pilings, and boat bottoms. Acorn Barnacles, Pacific Blue Mussels and Olympia Oysters become wallspace for sponges, primitive plantlike bryozoans and bugula, sea anemones, several kinds of sea squirts and tunicates. Lurking in this underwater jungle are sticklebacks, crabs and shrimp, pile worms, chitons, and brilliantly colored nudibranchs. And microscopic but essential are a myriad of miniscule plankton forming the basis of the marine food chain. 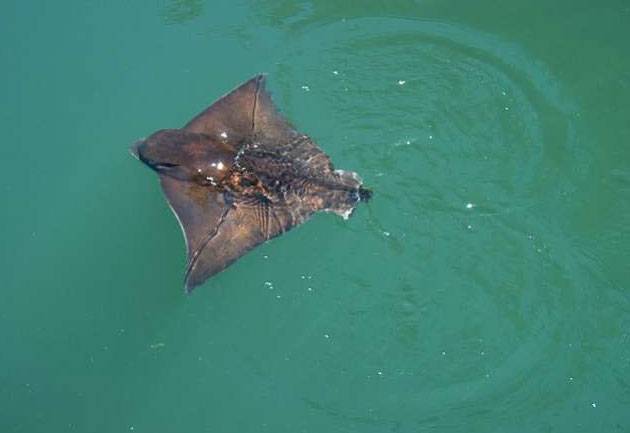 Strollers along the creek are thrilled to catch an occasional view of a Harbor Seal or Sea Lion. Four-foot Bat Rays glide through the shallows and scrape the houseboat sides for food. Once a small pod of Harbor Porpoises made a short visit. Anyone lucky enough to be around at the right moment might see a Leopard Shark, Moon Jellyfish or a Great Blue Heron with a rat by the tail. The Creek, throbbing with life, never fails to interest or surprise.

The successful revitalization of Mission Creek offers a unique opportunity for city dwellers to experience and participate in maintaining a wild habitat. But change will accelerate with Global Warming. How greater acidity and warmer seawater affect this underwater jungle that feeds so many remains to be seen. As one of the lowest areas in the city, Mission Bay threatens to return when the tidal waters start flooding the creek banks perhaps this century, reminding us that it is not Nature in the City, but the City in Nature. 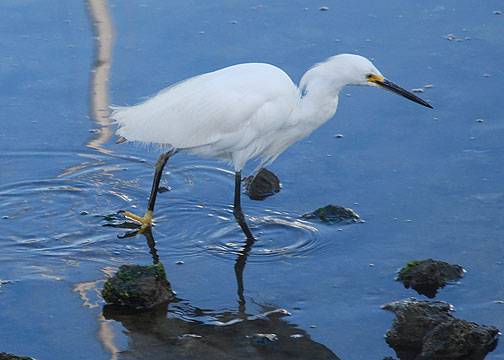 This is chapter nineteen of "Vanished Waters: A History of San Francisco's Mission Bay" published by the Mission Creek Conservancy, and republished here with their permission.