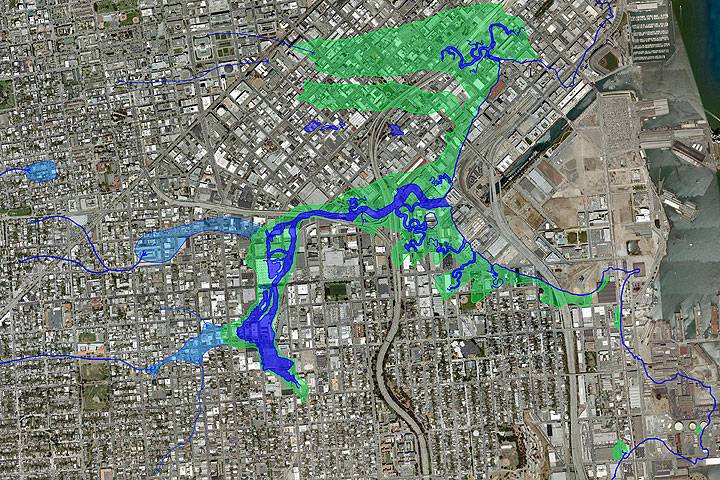 Bay View Race Track: Built in 1868 at the end of the Potrero & Bay View Railroad to make the horsecar connection to Hunters Point from San Francisco. Horse drawn streetcars ran out Long Bridge, south from Channel Street, along Fourth and continued south on Third Street. Bay View Playground, between Armstrong and Carroll on Third Street, marks the contemporary site of the long gone ornate pavillion and racetrack.

Butchertown: In the 1850s slaughterhouses were built on the banks of Mission Creek at Ninth and Brannan. By 1870 a city ordinance relocated the butchers south to Islais Creek at First and Kentucky (later known as Railroad Avenue, or Third Street). In both locations tides flushed animal waste into the larger bay.

China Basin: In the 1860s growing trade with the Far East gave rise to exotic names on San Francisco’s waterfront: the extant Oriental Warehouse, China Basin, and India Basin. The harbor entrance to Channel Street, extending south to Mission Rock, was shown as China Basin on 1869 maps, a name that persists today. Just south of Mission Rock and north of Potrero Point is Central Basin with India Basin shown as the cove below Islais Creek, lying north of Hunters Point.

Channel Street: As early as 1853 Channel Street was projected in Mission Bay but was not constructed as a protected shipping waterway until the 1870s. The north side was filled in by 1877 with finger piers extending south of Berry Street between Third and Fourth streets. By 1882 the south side of Channel Street from Third to Seventh streets began to be filled. Sometimes called Mission Creek, the channel is the last historic waterway remaining from vanished Mission Bay. Channel Street can be reached by bridges along Third or Fourth Street, south of Berry. It extends inland to Seventh Street.

Hay Wharf: As early as 1876 the hay dealers, who arrived by sail in scow schooners from faraway places like Petaluma, loaded with hay to feed the city’s horses, agitated for permission to use the railroad land-grant in Mission Bay to unload and sell their cargo. By 1884 a hay wharf had been constructed on an angle jutting into Channel Street from Pope and Talbott’s Lumberyard, between Second and Third, on the north side of the waterway. Nothing remained of the booming hay trade once the truck replaced the horse.

Islais Creek: Derived from the Indian word islay, meaning wild cherry, Islais Creek is the southern counterpart of Mission Creek, lying south of Potrero Point and north of Hunters point. Very late in filling, the Islais tidal salt marsh was still being reclaimed in the 1930s. Islais Creek Channel extends from the Army Street Terminal on the north side, east to Freeway 280, and may be crossed on a bascule bridge at Third and Tulare streets.

Irish Hill: From the mid-1870s through 1930, Irish Hill in the Potrero was the center of boarding houses and hotels for men working on Potrero Point in the iron works, refineries and gas works. A serpentine outcrop reached by 98 wooden steps, the hill housed over 800 workmen until World War II when it was leveled. Land east of Illinois Street, from Twentieth to Twenty-Third streets, marks the vanished hill today.

Long Bridge: A causeway to the Potrero, built from 1865 to 1867. Long Bridge started southeast of Berry Street on Fourth Street. The long wooden bridge turned south, following Third Street, crossed Potrero Point and continued through Islais Creek basin to Hunters Point, terminating at the Bay View Racetrack. Built to connect San Francisco to the Potrero and Bay View districts, it had the environmental effect of sealing off the larger western part of Mission Bay, leading to the eventual filling in of the tidal lagoon. No visible trace of Long Bridge exists today, but the contemporary route would be out Fourth to Third, and south to the Bay View Playground at Armstrong and Carroll.

Mission Bay: Appeared on the 1852 U.S. Coast Survey Map, named for the Mission founded at the head of the tributary creek. A tidal lagoon of over 500 acres including the extensive salt marshes that reached inland to Folsom and Mission streets, Mission Bay was a wildlife refuge for an immense bird population that fed on its teeming schools of fish, especially the smelt. The 1852 shoreline extended roughly from Third and Townsend, inland to Brannan Street, and west to Seventh and the line of Townsend, crossed the mouth of Mission Creek, and continued in a half-circle to Potrero Point, ending approximately at the modern juncture of Sixteenth and Illinois streets. Only Channel Street, which is the parallel street as well as the creek, remains as a surviving sliver of the waters of vanished Mission Bay.

Mission Creek: A navigable fresh water stream flowing into a tidal estuary, chosen by the Spanish fathers in 1775 as the ideal site for the Mission San Francisco de Asis. Springs formed a small falls and pond (located in the modern vicinity of Seventeenth and Nineteenth streets, Valencia and South Van Ness). Today, the juncture of Division and King streets marks the 1852 site of the tidal entrance of Mission Creek from Mission Bay. By 1874 the creek was vacated as a navigable stream between Ninth and Eighteenth streets.

Mission Plank Road: Opened in the spring of 1851 as a toll road from Third Street to the mission. Built by the Mission Dolores Plank Road Company for $96,000, the franchise allowed owners to collect tolls (50 cents for a horse and cart, $1 for a four-horse team) for seven years. The same company built Folsom toll road in 1853. Both roads set the route for present day Mission and Folsom streets.

Mission Rock: Once a navigational guide for ships, Mission Rock became a dry-dock and warehouse landing for ships. Pier 50 reached out to engulf Mission Rock as the furthest point of landfill of Mission Bay.

Pioneer Race Track: Built in 1850 by A.A. Greene, south of the Mission Dolores, between Twentieth and Twenty Fourth streets, to take advantage of the springy turf of the marsh. Later sold as homestead lots. 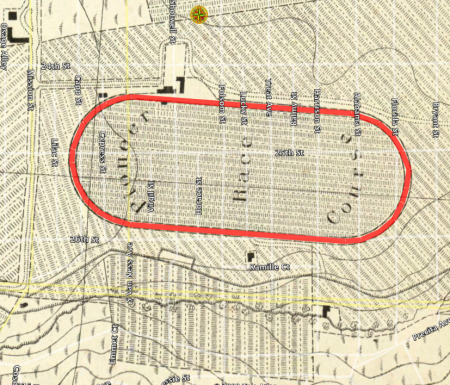 Potrero Point: As late as 1869, official maps named this location Point San Quentin. By 1882, the land projecting from the southern tip of Mission Bay is shown on maps as Potrero Point. Lying to the east side of Illinois Street, and bounded by Twentieth Street on the north and Twenty-Fourth Street on the south, Potrero Point was the center for heavy industry in San Francisco from 1880 through World War I. Among the industries located there: Pacific Rolling Mill, Union Iron Works, Atlas Iron Works, California Sugar Refinery, and the Bethlehem Shipyard.

Rincon Hill: San Francisco’s first posh neighborhood extended from First to Third Street, between Bryant and Howard. The l00-foot summit gave residents of the 1850s a view of San Francisco Bay from approximately the same aspect as from the beginning of city’s Bay Bridge footing, today. In 1869 the Second Street cut destroyed the hill’s integrity and led to its eventual destruction.

South Beach: As opposed to North Beach, referred to a shoreline area (including water lots) south of Rincon Point (Harrison and Spear streets), following an irregular shoreline around Steamboat Point (Second Street past Third, south of Townsend) to Mission Bay. South Beach has been obliterated by landfill.

South Park: Started in 1854 by George Gordon and modeled on an English row townhouse and garden development, this elegant enclave was designed around a central oval park for the residents’ use. The oval center, but not the townhouses, still exists between Second and Third, Brannan and Bryant streets.

Steamboat Point: First appeared on the 1852 U.S. Coast Survey Map, southeast of Third and Townsend. A marine railway was shown at Second and Townsend, jutting into the bay. On this narrow stretch of South Beach, John North, Domingo Marcuci, Patrick Tiernan and H.B. Tichenor constructed and repaired the fleet of sternwheelers and sidewheelers that carried gold seekers to Sacramento, and farther. This was the city’s prime shipbuilding location from the 1850s through the mid-1860s. Steamboat Point marked the northeastern limit of Mission Bay. Landfill has covered the shoreline of historic Steamboat Point.

This is the foldout at the end of "Vanished Waters: A History of San Francisco's Mission Bay" published by the Mission Creek Conservancy, and republished here with their permission.