Mayor Rolph and the Municipal Railway 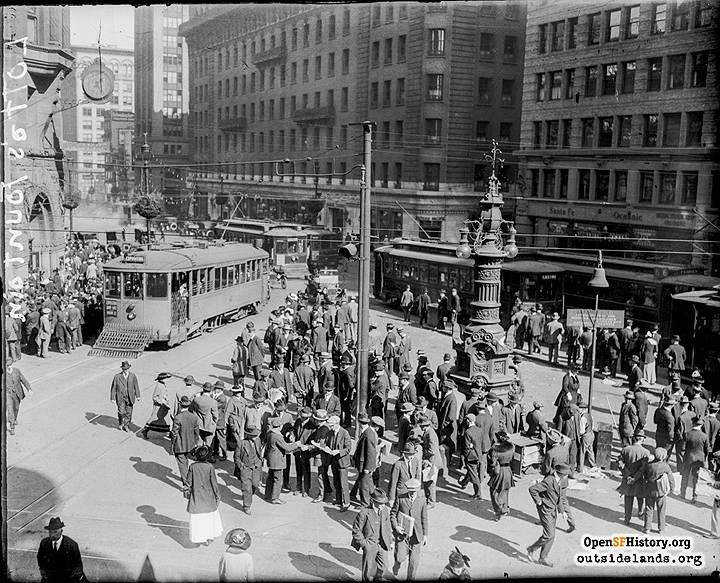 1915 streetcars at Kearny, Geary, and Market, with the D-car heading to the PPIE.

Rolph's promises for extension of the Municipal Railway also saw fulfillment before the end of his first term. The charter that went into effect in 1900 had included the possibility of municipal ownership of public utilities:

In fact, discussion of public ownership of the water system dated to the 1870s and might have occurred then had not William Ralston attempted so audaciously to profit from the transaction. Although the water system had been considered for decades as the prime candidate for municipal acquisition, the streetcar system proved the first focus of attention by municipal ownership advocates.(20)

At the turn of the century, most of San Francisco's residents lived within a block or two of a streetcar line. In 1902, one corporation, the United Railroads, acquired control of nearly all these lines, counting 226 miles of track and nearly one thousand cars. Three-fourths of the trackage and almost half the cars drew their power from overhead electric lines. Cables powered most of the rest, primarily in the downtown areas. A few were still horse-drawn, and one line was steam-driven.(21)

The United Railroads, under the leadership of Patrick Calhoun after 1905, sought permission from the city to convert all their lines to electricity, but the supervisors—prodded by beautification proponents led by Rudolph Spreckels—resisted until after the Union Labor party sweep in 1905. Then the counsel for the United Railroads and Abraham Ruef agreed that $200,000 would be sufficient to secure the board's consent. Ruef told the graft prosecution of this bribe in early May 1907, and by mid-May the full account had appeared in the city's newspapers. Two days after Ruef's statement to the prosecution, the Carmen's Union struck the United Railroads, demanding three dollars a day and an eight-hour work day. Calhoun vowed no surrender, imported strikebreakers and armed guards, and broke the strike and the union. Labor historian Robert Knight characterized the strike as “the most violent streetcar strike ever seen in San Francisco, or probably in any other American city.” On May 7, Calhoun's armed guards opened fire on a group of strikers, killing two and wounding twenty, including several bystanders. The ten-month casualty list among strikers and strikebreakers stood at six dead and 250 injured, with another twenty-five dead and 900 injured among streetcar passengers.(22) While Calhoun's strikebreaking earned him plaudits among open-shop advocates, it also brought the undying enmity of organized labor. His brazen purchase of the Board of Supervisors created similar sentiments among Spreckels and the reformers.

With Calhoun as convenient bête noire, efforts to secure municipal ownership of some part of the streetcar system drew increased support. Voters had rejected bond issues in 1902 and 1903, and an appropriation by the supervisors in 1907 failed to pass judicial scrutiny. Another bond issue, in the spring of 1909, failed by only a few votes. Success finally came in December 1909 when voters gave a three-to-one majority to two bond issues, to acquire the independent Geary Street line and convert it to electric cars and to extend the line down Market Street from Geary to the Ferry Building. With their passage of these bond issues, voters gave birth to the Municipal Railway, the first municipally owned streetcar line in the nation.(23)

Approval of the bond issue only started the process of building. Mayor P. H. McCarthy and his head of Public Works, Mike Casey, vowed that all labor for rebuilding of the line would be union labor, paid union wages. Control of construction remained with the Board of Public Works. Criticism circulated that employment on the project came only to those loyal to the Union Labor party and that those employed had to contribute to the party. Rebuilding of the line moved at a glacial pace. Only a bit over two miles—mostly unconnected—were complete when McCarthy left office.(24)

Immediately upon taking office, Rolph invited Bion J. Arnold, a nationally prominent traction expert, to advise the city. President of the American Institute of Electrical Engineers and of the Western Society of Engineers, Arnold had advised Chicago, New York City, Kansas City, Los Angeles, and Denver on their transportation systems. He and Rolph determined to depoliticize construction by changing to the contract system rather than continuing under the Board of Public Works. The remaining 3.5 miles of track were completed in less than six months, at a total cost only slightly more than the price of the 2.1 miles built under McCarthy. In late December 1912, Rolph personally piloted the first car out to the end of the line and back, then spoke briefly and extemporaneously:

We all should feel pleased that we have today started out in the great work of municipal ownership ... let us all work together for the public good. In unity there is strength. Let us all stand together.

Completion of the Geary Street line did not directly affect the holdings of the United Railroads at all. The next step in extending municipal ownership involved the monopoly that the United Railroads held on Market Street. Arnold drafted a lengthy charter amendment proposing a partnership between the city and the corporation; the proposal appeared on the ballot in December 1912. Rolph was wary, however, and stayed out of the city during the crucial days of the campaign. The proposal lost. Soon after, in early 1913, Rolph and Calhoun's successor agreed on terms whereby the Municipal Railway would have access to Market Street. Rudolph Spreckels found this compromise unacceptable, however, and used the referendum to force a public vote. Rolph plunged into the campaign enthusiastically, scourging Spreckels with a burning letter:

A ratification of the lower Market Street agreement means actual public ownership of a municipal railroad to the ferry, at once. This, your people are opposing: I doubt their good faith....

The professional agitators who are backing your association, financially and otherwise, never built any roads, and never will build any.... They oppose everything and suggest nothing.... Their sole aim and object in life seems to be, to acquire notoriety by preventing anything being done....

You cannot ride on a law-suit or on a speech.... Common scolds and obstructionists are the curse of San Francisco.

The voters sided with Rolph by almost two to one, and Rolph soon took the reins to drive the last horse-drawn car down Market. A few months later, he again plunged into another campaign, this time for a huge bond issue to build Municipal Railway lines to serve the PPIE. Rolph spoke at as many as ten meetings a day promoting the bond issue. Voters approved by a margin of 80 percent, and Rolph soon donned a motorman's cap to drive the first car over the new tracks.(26)

Expansion of the Municipal Railway and efforts to buy the holdings of the Market Street Railway Company generated intense political controversy throughout the 1920s. In 1917, with the Twin Peaks tunnel complete but no tracks yet laid in it, the supervisors clashed over the use of the tunnel. Some advocated that it be the exclusive property of the Municipal Railway, others that the United Railroads be allowed to use it, and still others that the United Railroads be given exclusive right to use it. Rolph insisted on municipal ownership of the tracks and won, but only after a stormy meeting. As Rolph retreated more and more from leadership, O'Shaughnessy increasingly filled that role, planning extensions and promoting new projects. In 1927, he was the major proponent of a $4.6 million bond issue, but voters rejected the proposal.(46)

An effort to sell the Market Street Railway (MSRy) to the city came in 1922, shortly after the United Railroads' bankruptcy forced reorganization. John Francis Neylan claimed that the architect of this scheme was Gavin McNab, acting for bankers and “insiders;” and that the asking price of $34 to $40 million was—by the admission of Fleishhacker—$10 million too high to be realistic. In 1925, an initiative measure proposed city acquisition of the MSRy for a total of $36 million. Neylan again saw McNab and Fleishhacker as responsible for the proposal and felt Rolph's closeness to both made the mayor unreliable in representing the city's interests. When voters rejected the measure, the MSRy was sold instead to the Standard Power and Light Company. Everyone involved knew that most MSRy franchises would expire in 1929, at which time 60 percent of the company's holdings would become the property of the city. In 1927, over the opposition of both Rolph and O'Shaughnessy, the Board of Supervisors hired a nationally prominent consultant, Delos E Wilcox, to survey the city's streetcar situation. Wilcox recommended a purchase price of $20 million and, failing that, that the city plan to take over all the expiring franchises in 1929. Caught among an unsympathetic Board of Supervisors, voters who refused to pay the company's price, and expiring franchises, the Market Street Railway found relief in a charter amendment in 1930, implemented by the supervisors in 1931, granting a twenty-five-year operating permit in return for promises to improve service and to build a new line. There matters remained unti11944 when voters approved the purchase of the railway for $7.5 million.(47)