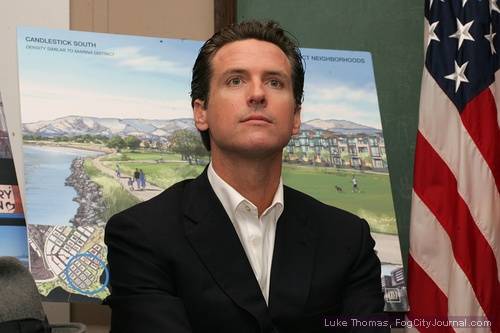 Gavin Newsom at a 2008 press conference.

Gavin Newsom was a maddening mayor for San Francisco progressives. While he lacked the shrewd political skills of his predecessor Willie Brown, Newsom also made a few deft moves that generated political capital, maintained his popularity with a majority of voters, and allowed him to move on to higher office.

But the legacy that he left behind was a city plagued by a deep structural budget deficit and greatly diminished social safety net, an affordable housing crisis exacerbated by turning over huge chunks of the city to politically connected developers to “redevelop” with mostly luxury condo towers, and a corruption of opportunities for honest political discourse.

Despite his regular claims to be practicing a new kind of governance based on “best practices” and bringing all sides together to work toward “common sense” solutions to problems the city faced, his cynical dismissal of “ideology” was a tactic that demonized progressive efforts to protect renters, small businesses, immigrants, and the poor.

So his tenure was marked by open combat with the progressive majority on the Board of Supervisors – led by most often by Sup. Chris Daly and successive Board Presidents Matt Gonzalez and Aaron Peskin – who actively countered Newsom's divisive tactics and policies that consistently favored the downtown Establishment. The result was acrimony at City Hall that soured many casual political observers on both sides, particularly after the press played up the most caustic comments of the politicians that they tended to demonize.

Initially, Newsom enjoyed some success and seemed like someone who might surprise his critics and be willing to take risks to combat the ugly politics that were taking root at the federal level under President George W. Bush. The high water mark of that hope came five months into his tenure when he led the effort to allow the city to issue marriage licenses to same-sex couples, which led to the statewide legalization of gay marriage and was Newsom’s most significant positive accomplishment.

Sure, his move may have been politically motivated, and it certainly served to expand his political base by capturing the queer vote, most of which supported Matt Gonzalez for mayor in 2003. But when Newsom used that popularity to play celebrity on the national stage, rather than spending that political capital to move an agenda here at home during tough economic times, progressive supervisors filled the void and began setting the agenda for the city.

It wasn't until 2006, halfway through his first term, that Newsom really began to reengage with the business of running the city, beyond the staff-level work and regular press releases touting their accomplishments, usually in an overstated way. That was when proposed limits on residential parking spaces (as a means of discouraging driving) and expansion of car-free hours in Golden Gate Park angered Newsom's conservative base and forced him to plug back into the city's political dynamics. And when Newsom's took a petulant and imperious approach to doing so, the die was cast for the divisions to come. 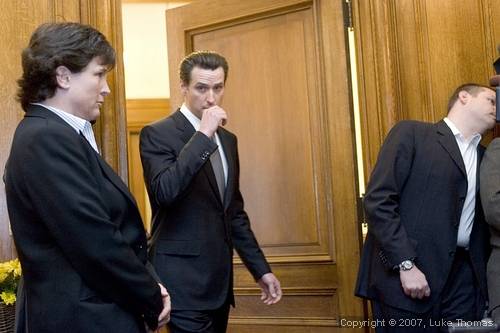 Newsom emerges from his office on February 1, 2007 to face the worst political crisis of his first mayoral term, stemming from having had an affair with his chief of staff's wife. 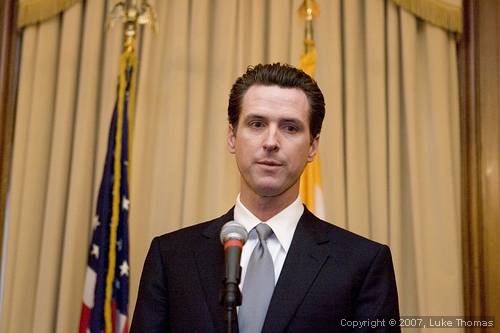 Newsom admits to affair: "I want to make it clear that everything you've heard and read is true and I feel deeply sorry about that. I hurt someone I care deeply about, Alex Tourk, his friends and family, and that is something I have to live every second of my life. I am also sorry I let the people of San Francisco down. They expect a lot of their mayor and my personal lack of judgment aside, I am committed to restoring their trust and confidence and will work very hard in the upcoming months to make sure the business of running the city is handled appropriately. I also want to extend a personal apology to everyone in my administration, to my staff that I just met with, and to my friends and my family members. I am deeply sorry and accountable for what has occurred, and now becomes the process of reconciling it and now working aggressively to advance the agenda in the city, and to work hard to build trust again, to restore the trust for the people of San Francisco."

Newsom used his annual budgets to make fiscally conservative political statements by proposing to privatize various city services, make deep cuts to the social services, and boasting of how he was closing massive budget deficits (at least several hundred million dollars, every year) without any new taxes (albeit with fee hikes on the full range of city services) – each time without consulting supervisors or constituencies that he knew would oppose him.

So each summer, the sky fell for the city's nonprofit service providers and social service agencies, who would go ballistic and force the board to spend months trying to restore the cuts and overcome the mayor's ideological opposition to new taxes (a fiscally conservative stand that he trumpeted in his campaigns for mayor, governor, and lieutenant governor). And every year, the public and the press became more and more cynical about City Hall, a legacy that still haunts San Francisco and which laid the groundwork for attacks on public employee unions disguised as needed “pension reform” efforts (even though it was Newsom who gave such overly generous contracts to police, fire, and other unions, at least partially to clear the field for his reelection effort in 2007).

This analysis – that Newsom was a divisive figure who sacrificed the best interests of the city on the altar of his own political ambition – has been validated since he left. Ed Lee, the city administrator appointed by the board to serve the final year of Newsom's term, has ushered in a new era of civility at City Hall that has been praised by everyone from the Bay Guardian to the San Francisco Examiner.

It isn't that Lee's policies are so much better. We at the Guardian have been highly critical of the corporate tax break packages and big development deals that he's pushed. And it isn't that the city's fiscal position has improved, because it hasn't. But when it came time to develop a budget, Lee consulted with supervisors and a variety of interest groups to get buy-in for his budget, which avoided the provocative gimmicks that Newsom seemed to relish inserting and starting fights over.

So when Lee appeared before the board (something Newsom refused to do, even after voters approved a measure asking him to) to deliver his budget on June 1, 2011, he got a standing ovation. Not for what was in the budget, but simply for being willing to engage in an honest and open dialogue with the supervisors and stakeholder groups. And the fact that this simple gesture was so enthusiastically received is a testament to the ill will that Newsom sowed.

It didn't need to be that way. With some of his environmental policies, particularly his administration's efforts to take back public spaces from the automobile for more active uses and his good working relationship with the San Francisco Bicycle Coalition and other alternate transportation groups (particularly in his second term), Newsom's legacy could have been as clean and green as his press releases claimed.

But in the end, his personal ambitions so strongly outweighed his willingness to work with all sides on creating a better San Francisco that he left the city divided, desperate, and cynical – just like much of the country during this dark political era. When I asked Chris Daly what he thought Newsom's legacy was, he didn't cite any of the myriad ideological or personal battles they fought, but he suggested something more basic.

Sure, the city has always been a Democratic Party powerhouse, home to such nationally known figures as Willie Brown, Nancy Pelosi, and Dianne Feinstein. But it was Newsom and his cadre of top political consultants who really destroyed what made San Francisco different – which was perhaps our pride in being different – and ushered in a style of politics that was divisive, dishonest, and aimed outside our borders.

Steven T. Jones is the City Editor at the San Francisco Bay Guardian.