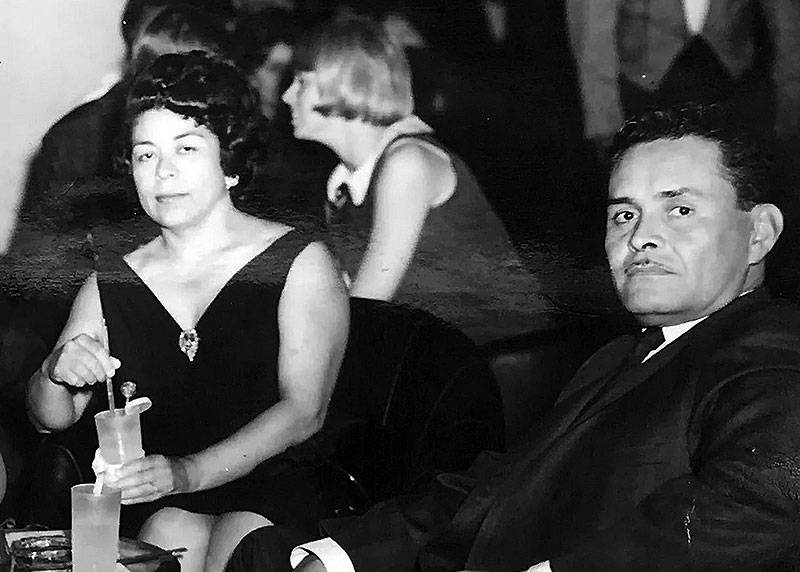 Angelina’s friend was getting a group together to go dancing over in Oakland at Sweet’s Ballroom. Spring, 1953. Her friend’s brother, Jose, home on leave from the army, was visiting his family at their house on 25th and Rhode Island streets. (He’s a good dancer.) Angelina remembers that day when she met her future husband of almost 70 years.

“He was wearing a dazzling aquamarine blue suit and a sharp tie. He was driving a brand-new Chevrolet, and I looked and I looked at him and I said to myself, ‘Ah, hello, here is my destiny!’ ”

Jose grins at the memory. “That was a Bel-Air I had, one of the first, a gold-colored Bel Air!”

The Mission District nonagenarians, (both completely bilingual), laugh when asked: Well, how do you do nearly 70 years of marriage?

Angelina’s eyes gleam as she recalls being married with two kids and her husband paid on Fridays. “He began going to that Italian bar, there on 16th Street, after work with his friends .”

“It was just to pass a few happy hours relaxing and laughing with coworkers,” Jose explains.

Too much of both, Angelina decided, and she told him that if he wasn’t home by midnight, the door would be locked.

“There were nights I slept in the Chevy,” Jose says.

The de Andas look at each other with unspeakable grace.

“But I forgave him.”

Angelina Garcia was born in 1927 in Bramin, Oklahoma, after her father came from Mexico to work on the railroad. She was the last of four kids born in the United States, but later they returned to Mexico to be with her grandmother, and she was raised in Juarez. “I left school after the fifth grade and, at 16, I began crossing the bridge into El Paso, Texas, every day to work in a sewing factory. I learned all the machines: the industrial ones, the button hole machines. I made shirts and pants all day, clocked in at 8 and left at 5. I was quick and accurate.” 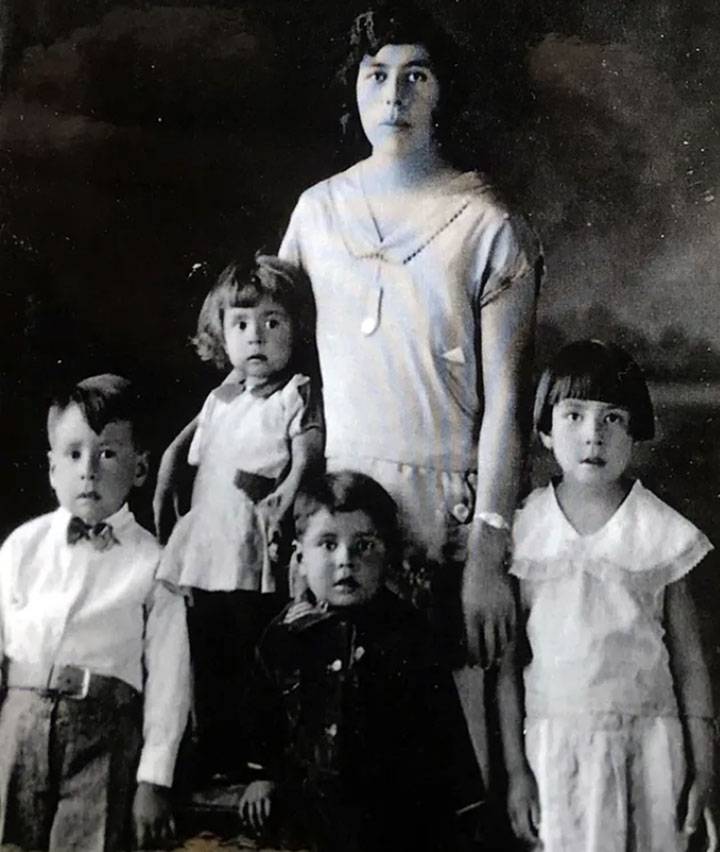 Angelina Garcia, the last of four children born in the United States.

When she came to visit her brothers in Fresno and San Francisco in 1952, the 25-year-old Angelina found a job sewing curtains and drapes at a factory at Second and Mission streets. “My rent was $10 a week for a room in the Ojeda family’s house, and Señora Ojeda fed me, too. I had enough money for everything, including going dancing at Sweets Ballroom in Oakland, where visiting orchestras came from Mexico. Las tardeadas! I had soooo many dance partners!”

Times were good, she said; work was plentiful, and if a boss treated her badly in one place, she could always find another job.

Jose De Anda was born in Kermit, Texas, where his dad, also from Mexico, had come to work in the fields.

His parents returned to Mexico when he was still a baby, but at 15 he returned to his uncle in Sacramento, to work. “In 1945 there weren’t enough men. It was wartime, so I worked in the sugar beets, and the carrots, then came to San Francisco and worked for Levi Strauss as a Bundle Boy on the sewing floor.”

There, he bundled up pieces of fabric and ran them from table to table. “I made 85 cents an hour, and then I got a raise to 90 cents. That wasn’t for me.”

Next, he worked in a cannery in Hayward, and then he was drafted during the Korean War and sent to Alaska for two years. “They said we were protecting our borders.,” he explains.

Angelina and Jose married in 1955 in Fresno, and moved into a flat on San Carlos Street between 20th and 21st streets in the Mission, where their rent was $35 a month.

“I really wanted to be a firefighter, it was my dream, so I went down to apply, but they told me I was too short,” Jose recalled. You had to be five feet eight inches. He was only five foot seven inches.

With his wife pregnant with their daughter, he found work with the Hostess Wonder Bread Bakery, (Continental Bakery), at 16th and Bryant streets. “It was a union job, great benefits. And we bought our house on Folsom Street in 1979,” he says. He worked there for 40 years and retired in 1993. They raised a son, Gilberto, and a daughter, Alicia, and have eight grandkids and seven great-grandkids. Angelina also worked as her kids were growing up, volunteering at St. Charles Catholic school on the corner of 18th Street and South Van Ness Avenue, which closed in 2017. “I sewed costumes, I answered phones in the office, and I represented St. Charles at the meetings of all the Catholic schools,” she said. At the time, she worked as a file clerk in the financial district and retired in 1994.

Before Covid-19, they traveled to Barcelona and Toledo annually, where they have four grandsons and great-grandkids (their daughter Alicia, who died of cancer in 2013, married a Spaniard).

“Another place we loved to go is to El Bosque de la Primavera, outside of Guadalajara, to take the thermal waters, two weeks every year,” Angelina adds. But these are not those times.

Though not wandering in Spain or Mexico, they are out every day, walking and talking in their neighborhood, avid and engaged, often counseling and offering advice at Martha Brothers’ coffee shop on Cortland Avenue. That’s across the street from their parish church, St. Kevin’s, where Angelina, 94, volunteers regularly. 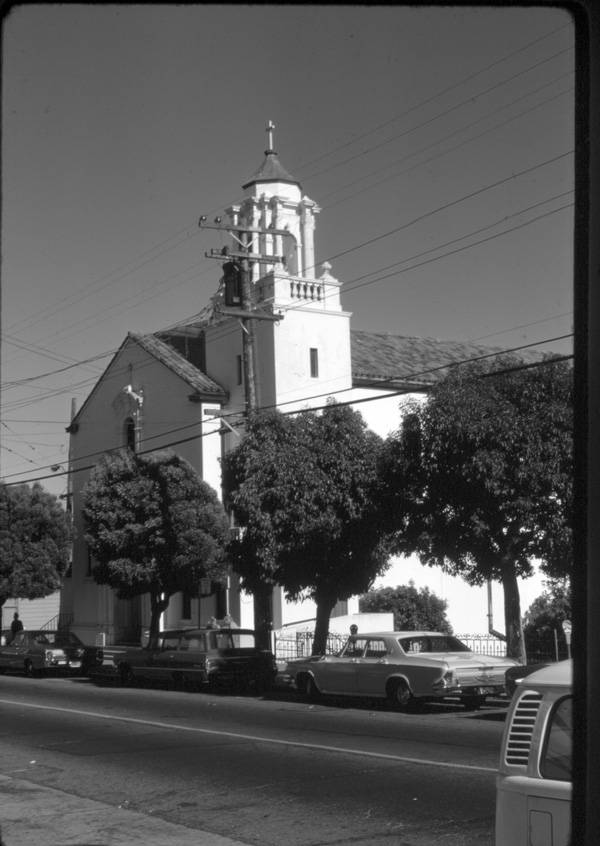 “Some weekends, I make 100 to 200 tamales in the church basement kitchen,” said Angelina. “We feed the parishioners after mass, and we also feed the homeless. Whatever they need, I can make down there: enchiladas, tacos, tamales. Also, I regularly help out counting the money, (the donations) because they trust me, I think.” 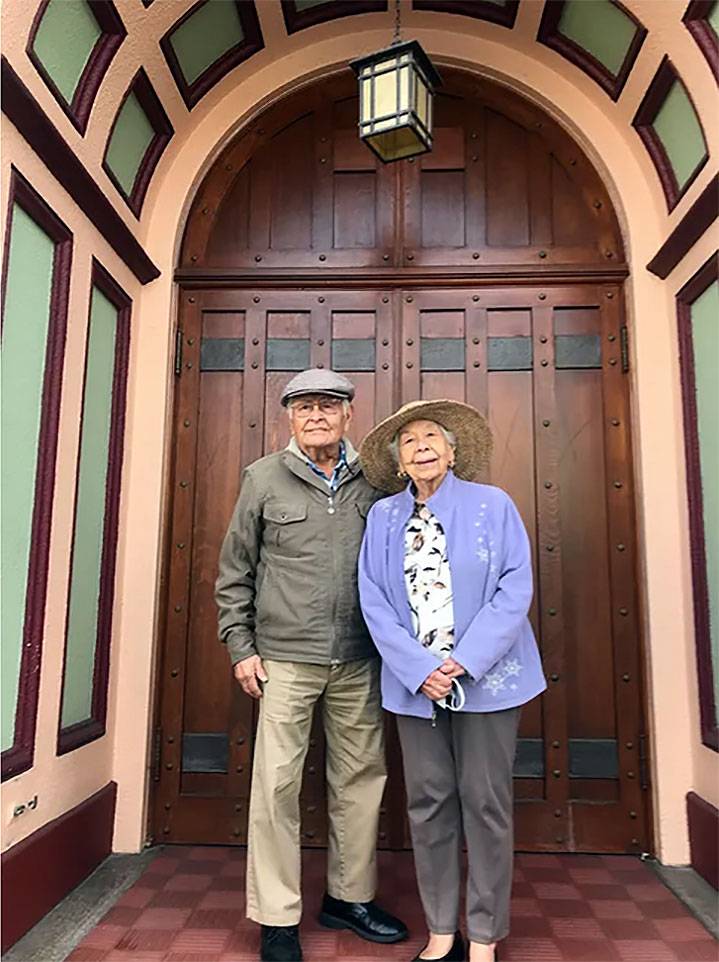 Jose and Angelina de Anda in front of St. Kevin’s where Angelina still makes tamales and counts the money.

“People start conversations with us all the time,” says Angelina.

And she gives an example of three young girls in a café complaining about their job and a boss who wasn’t treating them right. “They asked me if that ever happened to me, so I suggested they SPEAK UP!”

Jose says he walks every day, taking the bus to the Embarcadero, where it is flat. “My knees are too old for the hills around here,” he says. “I lubricate my knees at the Embarcadero.”

On a mild winter morning, they sat outside the café, greeted constantly, “Saludos, Comadre!” as they sipped small coffees.

“Abuelita,” said a burly, tattooed young man as he climbed back into his pickup truck with his takeout coffee, “ I bought you a pan dulce,” and proffers a paper bag with smiling eyes over his mask.

“Gracias, mi hijo, just a little piece,” and Angelina delicately tears off a corner of a jam-filled pastelito and offers it to Jose.

Was that their grandson?

“No, I just always see him at the cafe,” Angelina shrugs, “ but they all call us Abuela and Abuelo around here. And that’s ok with us.” 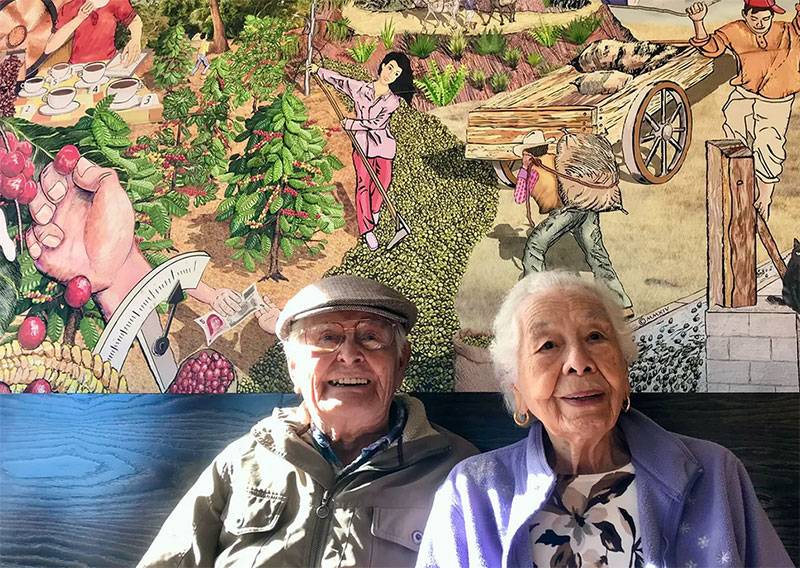