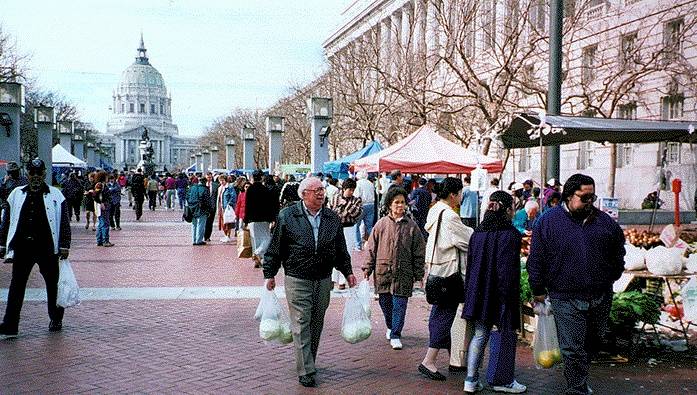 The Heart of the City Farmers' Market brings fresh food to the Civic Center every Wednesday and Sunday, year round. One of San Francisco's best places to eavesdrop on a multitude of languages, from Russian to Tagalog, Chinese and Spanish.
Photo: Chris Carlsson

The Tenderloin's need for fresh produce was addressed when the American Friends Service Committee, a Quaker service organization, set up the Heart of the City Farmer's Market in United Nations plaza on the edge of the Tenderloin. Today, after sixteen years, the market is still going strong, giving neighborhood residents a chance to buy fruits and vegetables -- as well as live chickens and freshly caught fish -- directly from farmers and producers.

Other community-based organizations were also looking around the neighborhood, finding major needs, and mobilizing to meet them. To serve the new population of children, for instance, neighborhood leaders and activists demanded a park. Boeddeker Park, named for the founder of St. Anthony's Dining Room, opened in 1985, but competition for its use soon made it a center of controversy. Since one overused park didn't come close to meeting the needs of the neighborhood for recreation space, neighborhood groups pushed the city to set up a children's playground, which opened in 1996 on Ellis Street.

Neighborhood arts and cultural organizations also took root and flourished. Arts programs based at the Cadillac Hotel and especially at Hospitality House nurtured major artistic talents and provided venues where their work could reach a wider public. Two theater groups sprang up in the neighborhood, producing plays with neighborhood actors, and attracting city-wide audiences; one, the Exit Theater, continues today. The 509 Cultural Center was born as a performance space for local musicians and a meeting and gathering place where neighborhood residents could share artistic and political ideas and visions. Murals were painted on public walls around the neighborhood.